An Afternoon in Melk, Austria

I can’t remember where I first saw it, but pictures of 11th century Stift Melk, or Melk Abbey, sold me on a visit to this sweet Austrian town along the Danube. Knowing that I had to see the abbey for myself, we planned Melk as a stop on the way from Vienna to Salzburg. It was a perfect way to break up the train ride, and an easy stop for lunch.

As soon as we hopped off the train and headed through the darling neighborhood streets situated below the abbey up on the hill, I knew we were in for a treat. 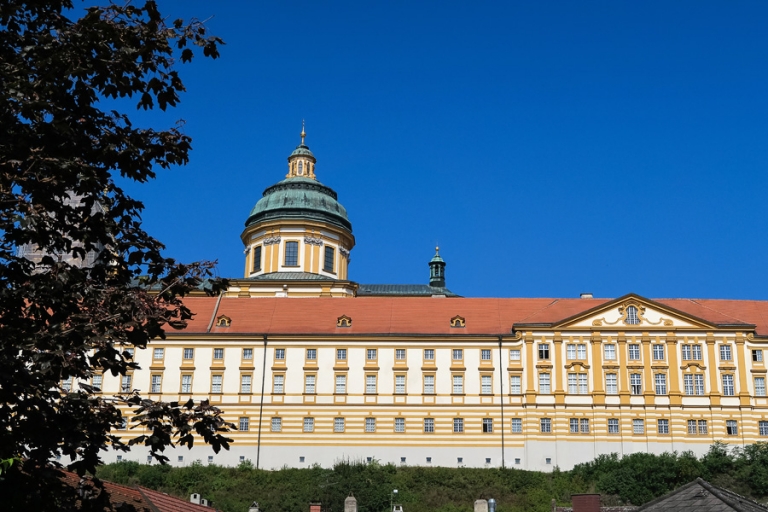 We enjoyed a delicious lunch at Rathauskeller Melk before exploring the main parts of the town. Like our time in Vienna and Bratislava, we were gifted with a gorgeous day and the clearest blue skies. (Side note: it was over 90-degrees and we didn’t exactly pack for super warm weather, so I will forever associate Melk with being super hot and sweaty. This is also the reason there is not one single picture of us.) 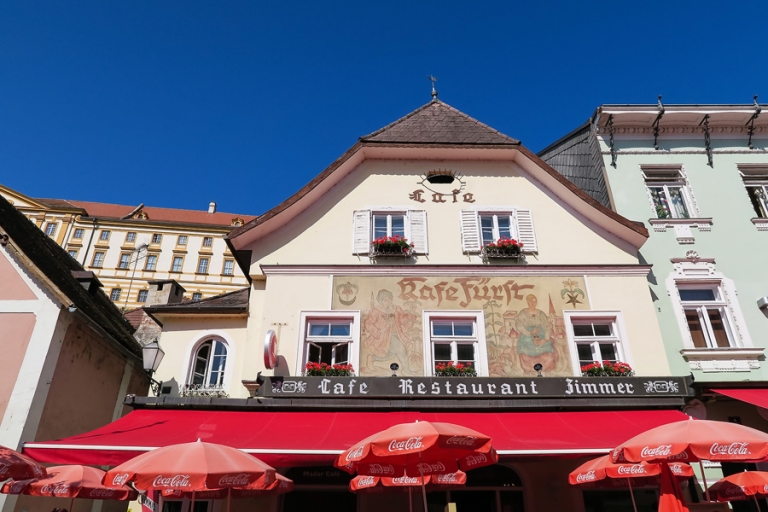 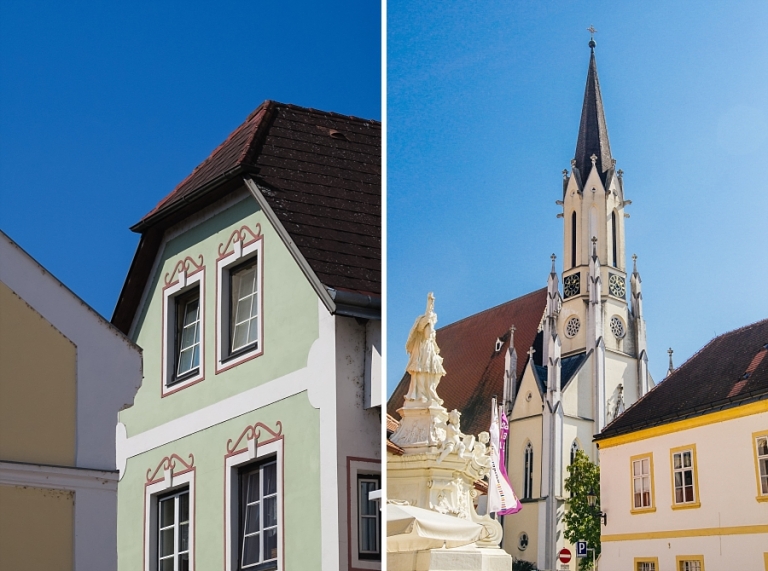 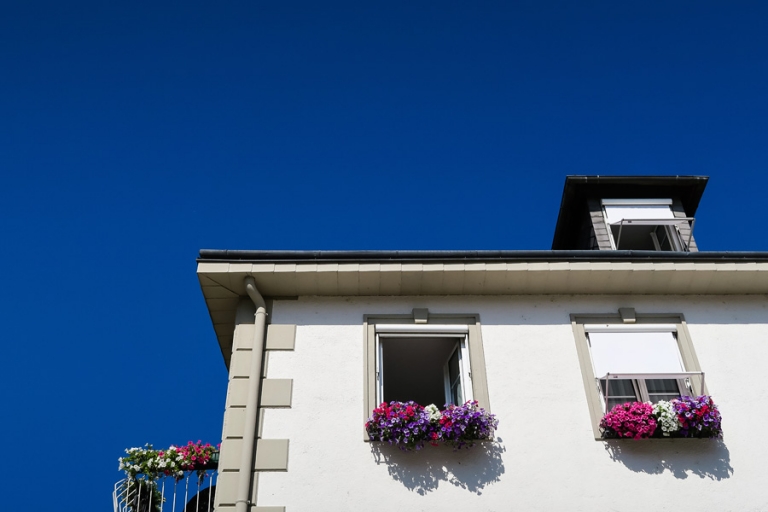 It didn’t take long before I was lured up to the abbey. We hiked up the hill’s many steps and did a self-tour of the grounds before heading inside. 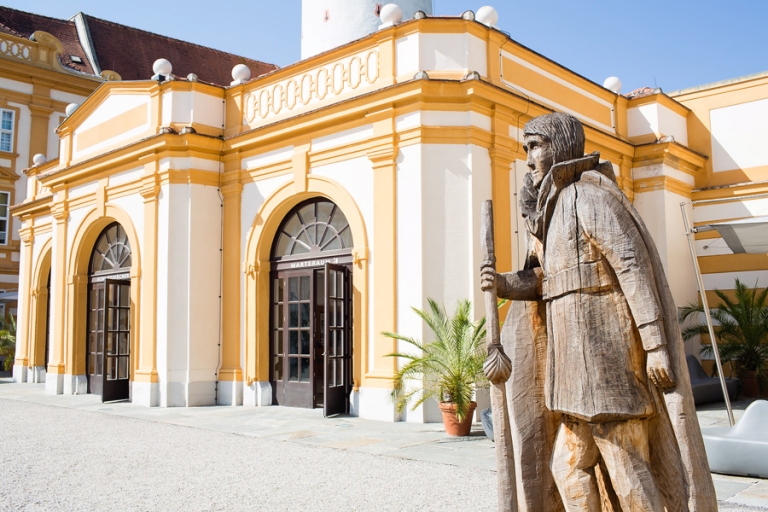 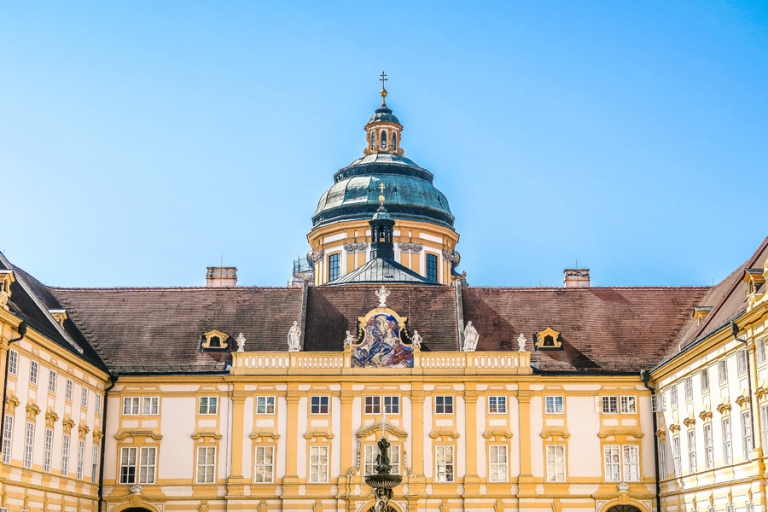 I pretty much went overboard taking photos in and around the abbey. The inside was stuffed to the gills with several tour groups, but somehow we managed to have most of the courtyard to ourselves. We ended up shimmying past the museum mobs so we could get to the other parts of the abbey and experience those rooms in peace, too. 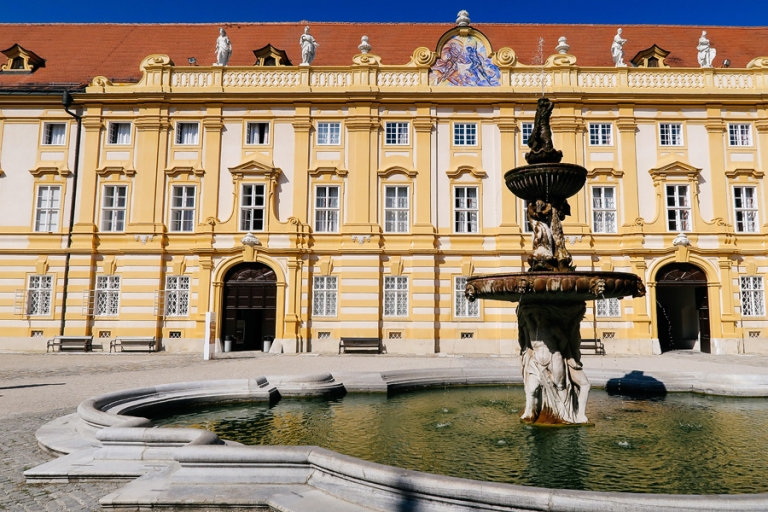 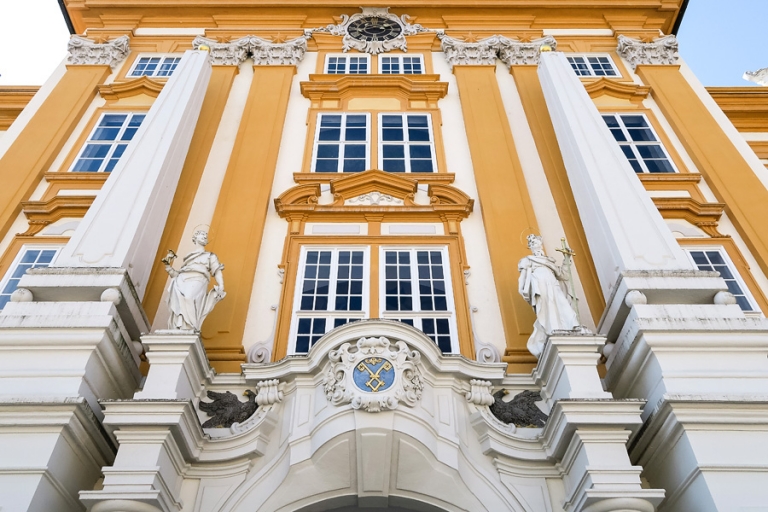 There are plenty of signs inside asking people not to take photos, but there are a few spots in which photos are allowed. I think/hope this staircase is one of them. 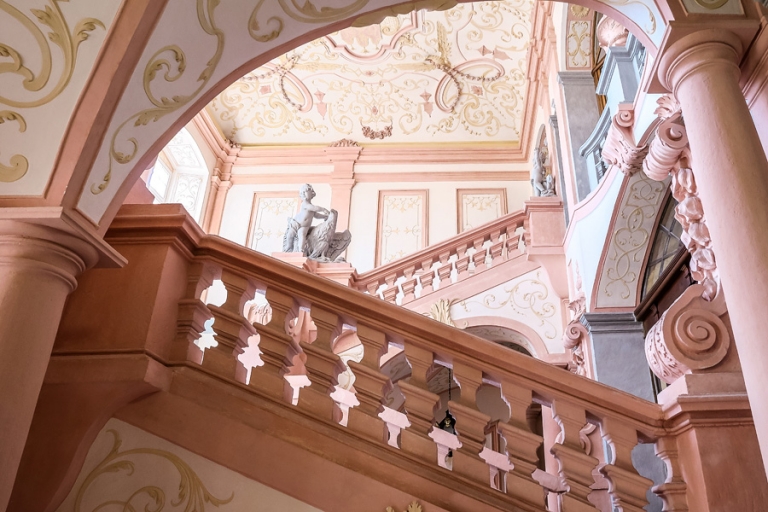 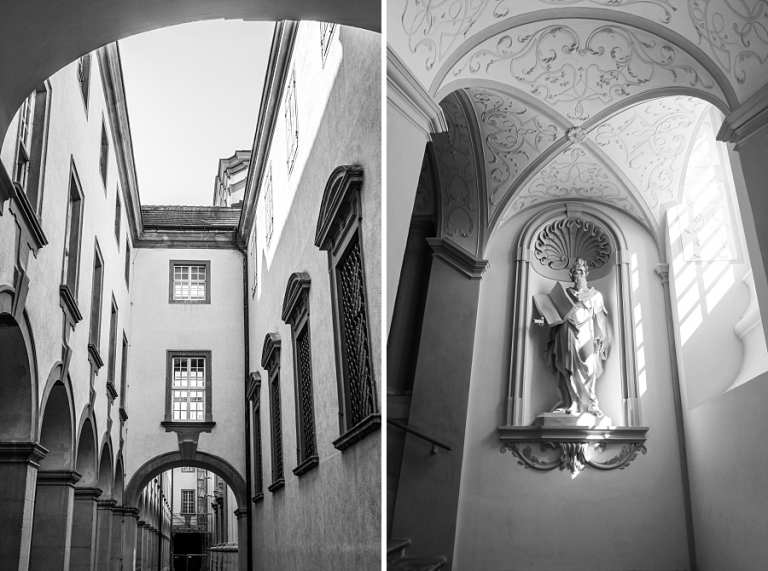 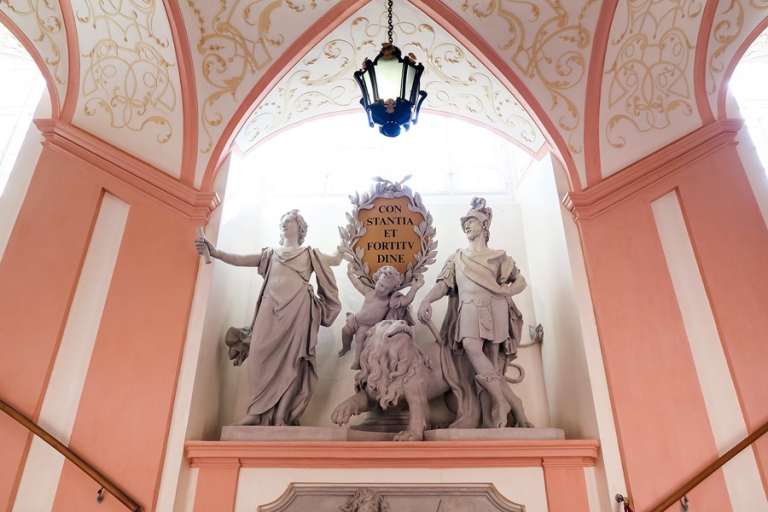 Sections of the abbey were under repair so there was quite a bit of scaffolding, but we managed to photograph around it for the most part. (If I was hoping to find only one scaffolding-free building/monument on this trip, it was the Neuschwanstein castle in Germany…more about that in a future post!) 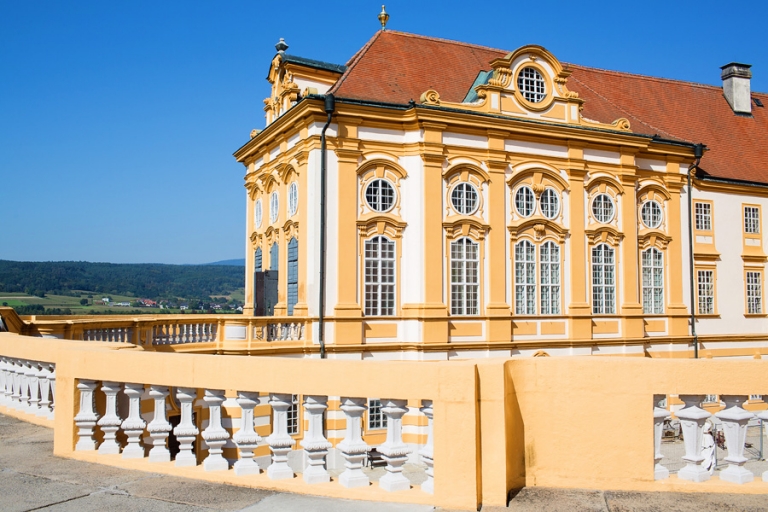 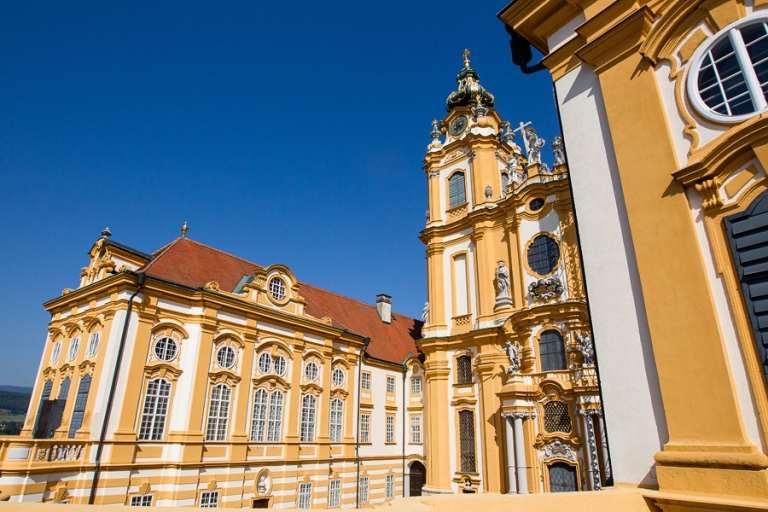 As if the fascinating history, ornate Baroque details, and beautiful frescoes aren’t enough, the abbey offers a wonderful view of the town below. Don’t the buildings look like little dollhouses from here? 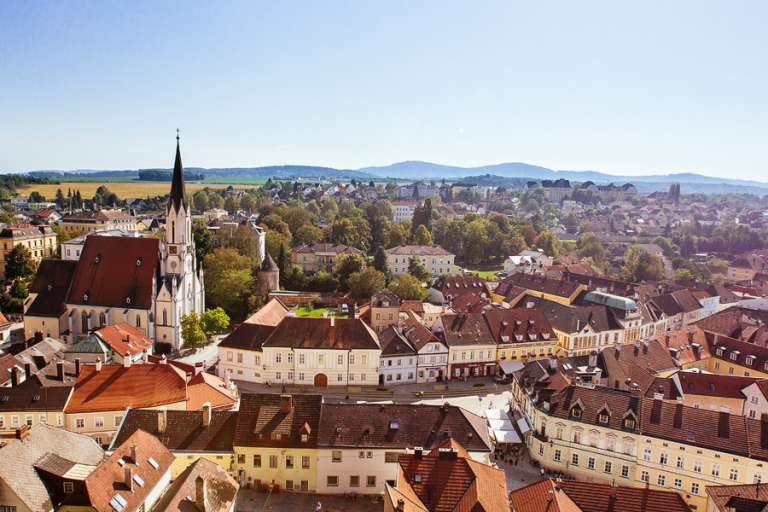 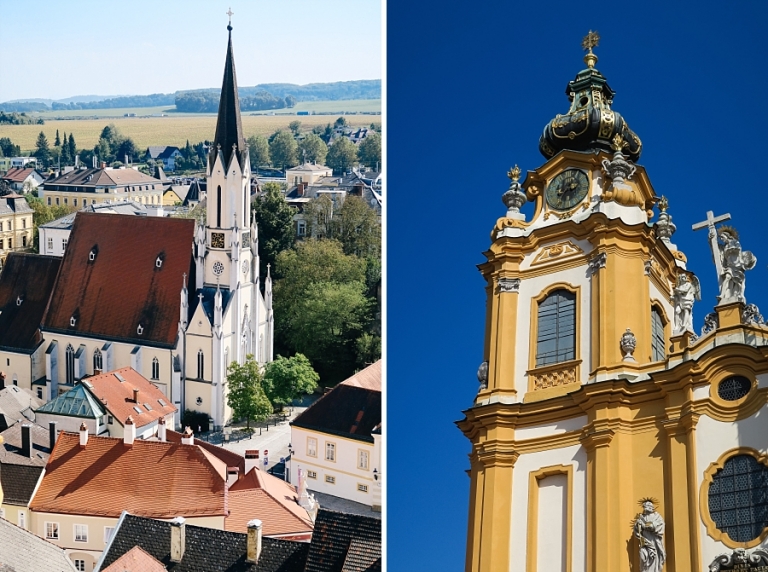 So…I’m generally a rule-follower, especially while traveling (I don’t want to be on an episode of Locked Up Abroad), but I broke a rule while visiting the church. I took a photo where a sign clearly indicated no photos allowed. I refrained from taking photos in the gorgeous library, but I simply couldn’t help myself in the church. I was super quick, stood only behind the pews, was quiet as a mouse, no clicks or beeps, no squeak of my shoe, and no flash, so I hope I can be forgiven.

As a former professional wedding photographer, I’ve seen a lot of churches, but I officially declare this one the most beautiful I’ve seen so far. And my iPhone photo doesn’t even do it justice – it took my breath away! I could have gazed at the massive frescoes and gold leaf for days. The staircase between the library and the church was also stunning. 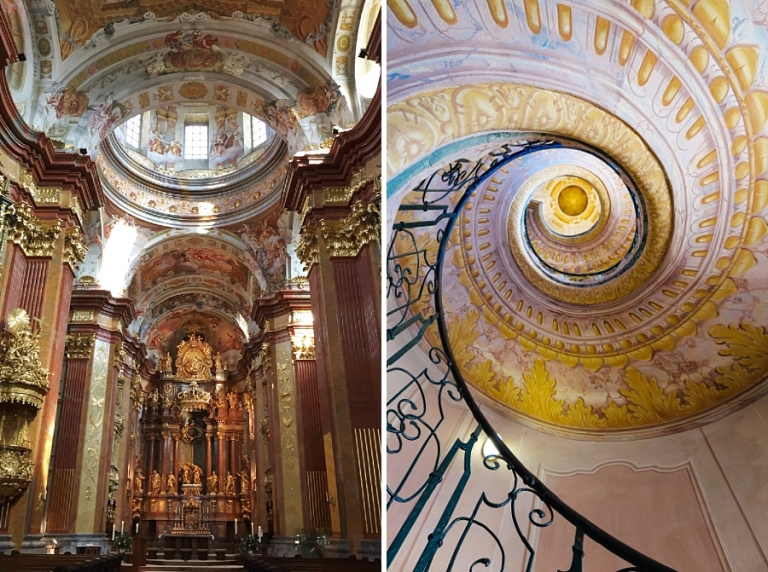 Suffice it to say, Melk certainly turned out to be one of my favorite stops out of the whole trip. I highly recommend a visit as either a day trip from Vienna or as a stop in between other cities. And if you happen to very respectfully sneak a quick picture in the church, I promise not to judge you.

Photo Friday - Reynisfjara
What I Packed for Ireland and Scotland in Late Summer
A Pit Stop in Pilsen
The Great Beer-Off of 2016: Round 2 Germany
Tags: Austria, Europe