Sometime a while ago when Chris and I were having one of our adventure/travel brainstorming discussions about what we’d like to do and where we’d like to go in the future, Chris said he’d love to try scuba* diving someday. Since we planned on visiting the Cayman Islands for a future trip, I began to research and quickly discovered The Caymans are one of the top diving destinations in the world, known for crystal clear waters and beautiful, friendly sea life. I’m typically unable to approach anything new on a casual level, so I immediately decided that if we were going to try scuba diving, we might as well (warning: upcoming pun) dive right in and get PADI certified. You can’t just go dive without some training anyway since there’s a lot involved to it! The certification course consists of three parts – classroom or online study, confined water training (typically held in a swimming pool), and open water dives. I signed up for the first two parts with a local dive shop, and planned to do our check-out open water dives in Grand Cayman since we had already planned to be there.

I have no problem with the idea of breathing underwater in the pool. That actually sounded fun, so I didn’t think the mechanics of diving would be an issue. But oh, wait…I seemed to have forgotten that I’m fairly terrified of the ocean. Jumping out of a plane? No problem – I didn’t even get the tiniest bit nervous until a few minutes into the flight. Jumping into open water filled with creepy creatures that want to attack me? Problem. I’ve been nervous for months ever since I signed up! And I have absolutely no idea where this fear stems from – I haven’t had any traumatic incidents in the water. I’m not even really worried about sharks when I’m at the beach. It’s the small creatures that freak me out for some reason. (I rue the day I watched a Discovery Channel special about irukandji.)

Slowly I began to worry more and more about my ability to handle all four of the open water dives required to become certified. So I thought maybe we should do the whole certification on the island and I booked the course with a dive shop that does all the initial training in the shallows of Seven Mile Beach. I figured that way I could gradually get used to being in the ocean. But my anxiety continued to escalate. My concern was that I wouldn’t be a safe diver considering my level of fear when it comes to jellyfish, barracuda and other stinging/biting things in the water. The one thing you can’t do while you’re diving is panic. The other thing you can’t do when you’re diving 30 meters under the surface is bolt back up for any reason – if you ascend too quickly, you risk decompression sickness (a.k.a., the bends). And I’ve been known to panic and bolt in the water! I bolted out of the water at the sight of seaweed on my very first attempt to snorkel in St. Thomas. Seaweed. The second time I tried to snorkel (years later), I panicked and made a beeline to the shore after seeing a stingray at least 10 feet below me at Cinnamon Bay in St. John.

In addition to my fears of certain ocean creatures, I’m also a really (really really) excitable person about almost everything. Especially animals. If I see a turtle while I’m diving, I’m pretty certain I’ll gasp and squeal and flail about just out of sheer joy. Gasping, squealing, and flailing are probably diving no-nos. I have no idea if I can stay calm while diving, and that’s apparently one of the key ingredients: stay calm, and breathe.

So I decided that the best thing for me to do was to first see if, in fact, I would be fine with diving in a pool. Our local dive shop offers a Discover Scuba Diving (DSD) class where you learn basic skills, equipment usage, and safety in a short classroom session, and then you practice in a pool. Chris and I signed up together (the class was probably unnecessary for him, but he was sweet to humor me) and we completed the class last weekend. Just as I expected, I had a ton of fun in the pool! Getting used to the heavy, complicated equipment was easier than I thought, and we did the basic skills with ease. We learned how to descend, adjust our buoyancy, clear a flooded mask, retrieve a lost regulator, and swim with fins. The only catch was that when our class arrived at the rec center, we found out the pool was double-booked, so the shallow end was already in use and we’d have to complete all of our training in the deep end! It definitely rattled everyone in the class, but it turned out to be easy and so fun (for most people). Chris and I were quickly comfortable at the bottom of the pool, and we hung out just breathing and practicing skills for nearly an hour. 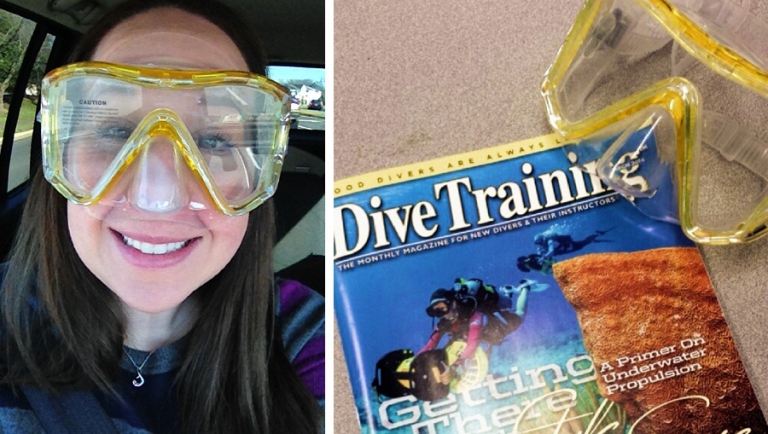 Whether or not I can translate the skills and my comfort level to the open water is TBD, so we’re going to hold off on full certification for now since it’s a fairly big investment in time and money for something I’m not even sure I’ll enjoy! We are signed up for another DSD class in Grand Cayman, where we’ll review the skills in the pool and then go on an open water reef dive off of a boat. If I fall in love with it, I can go forward with the certification and I’ll already have some skills under my belt. If I hate it, I can at least say I tried. I’m excited and nervous, but I’m going to try to stay calm and not chicken out. I think the reef dive is about 30 minutes long, so it’s not really likely that I’ll get stung or bitten right?! Wish me luck!

*I do realize SCUBA is actually an acronym and was originally always notated in all caps, but after spending some time on dive-related message boards, it seems most divers commonly type scuba as a lowercase word.