Following the Malt Whisky Trail in Speyside: Part One

After spending a day in Glasgow, Chris and I set off the next morning on a road trip to Speyside in order to visit the distilleries along the Malt Whisky Trail. Chris has become a huge fan of whisky and we had tons of fun touring the distilleries on Islay a few years ago, so we decided to spend three days in this region on our quick five day-trip.

Note that while I’m not a whisky drinker, I do like to participate in the tastings, and I enjoy learning about the process and the culture. And I’m always happy to have any excuse to travel anywhere. Plus I’m designated driver if needed! 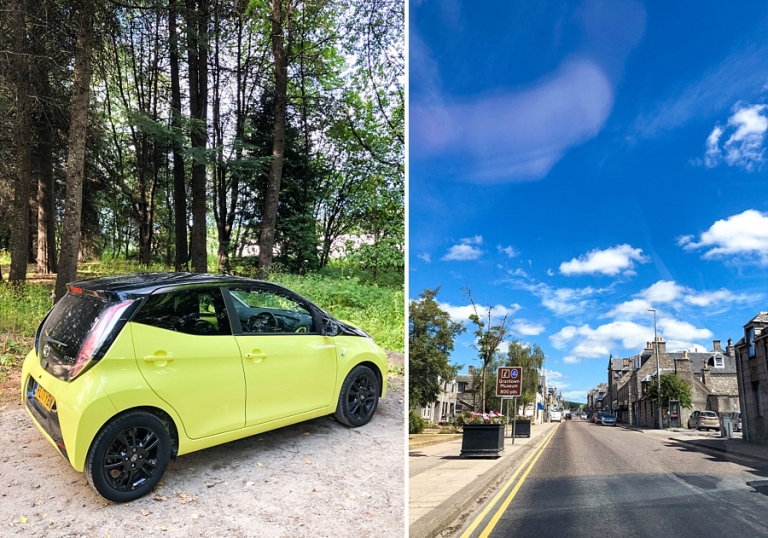 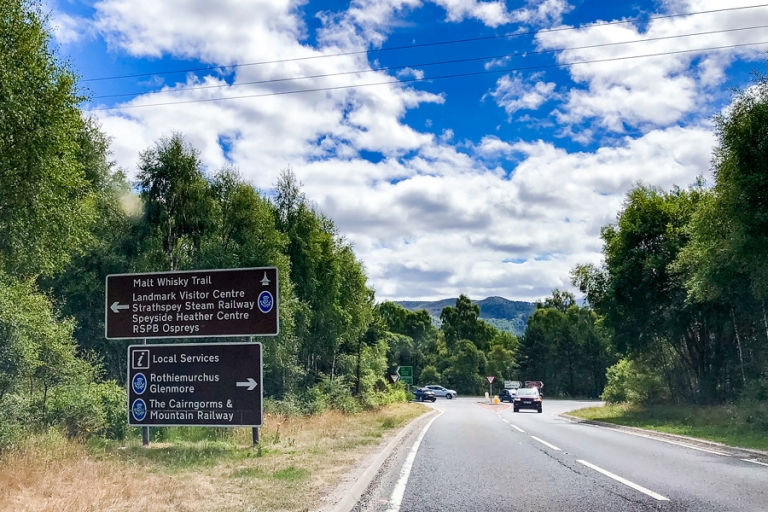 After just under four hours on the road we arrived in the Speyside area, and first things first, we stopped for food. Most notably, we followed up our lunch with whisky ice cream at Balvenie Street Ice Cream in Dufftown. Now this is a whisky I can get excited about! The sweet option, rather than fruity or peaty, hit the spot. Chris probably would have enjoyed the peaty version, but he let me pick since he would be enjoying many whisky varieties soon. 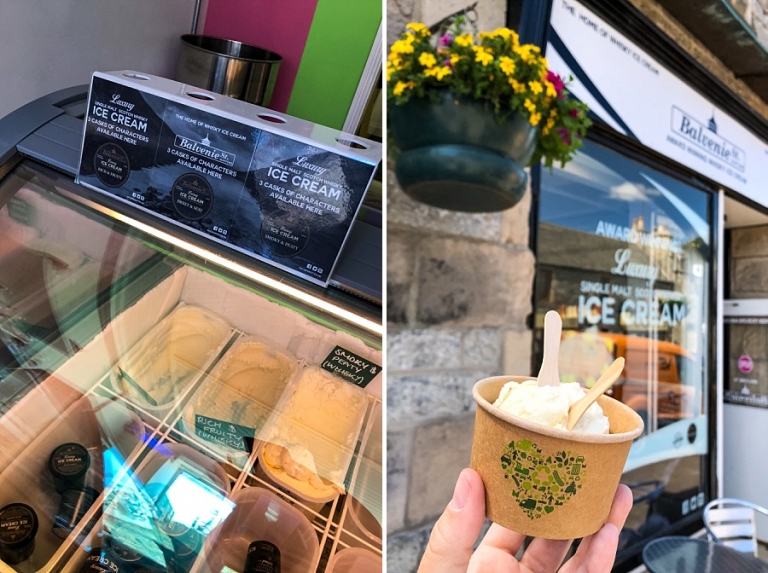 Before I dive into our itinerary, I thought I should explain how we planned our Speyside visit. From what I understand, distilleries in Scotland generally require whisky tastings to be paired with an educational experience such as a tour, so if you want to try the whisky at a distillery you need to sign up for their tour. In some cases you might be able to try a small sample in a distillery’s shop, but we did see some guests without tour reservations who were turned away.

The tours ranged from £5-50 pounds per person, and lasted anywhere from 45 minutes to three hours. Most distilleries required advanced booking, so Chris picked which ones he wanted to visit (seven of them, plus one we added at the last minute) and we made reservations two months before our trip. It does take a little work to arrange the schedule depending on the number of distilleries on your list, so if you’re planning to visit Speyside for a similar experience, don’t wait until the last minute to book! Even as early as we booked, tours were already filling up and our plan ended up being a little less efficient than it could have been with a bit more lead time.

Our first tour of the weekend was at Balvenie, arguably the most in-depth tour offered in the region. The soup-to-nuts tour and guided tasting lasted around three hours, and it ended up being our favorite of the trip so we started off on a very high note! My favorite part was definitely the time we spent in the cooperage where the coopers assemble the barrels in which the whisky is aged. Balvenie is one of the few distilleries in the world that has a cooperage onsite (most operations outsource the barrel making) and it was our first time seeing the process. 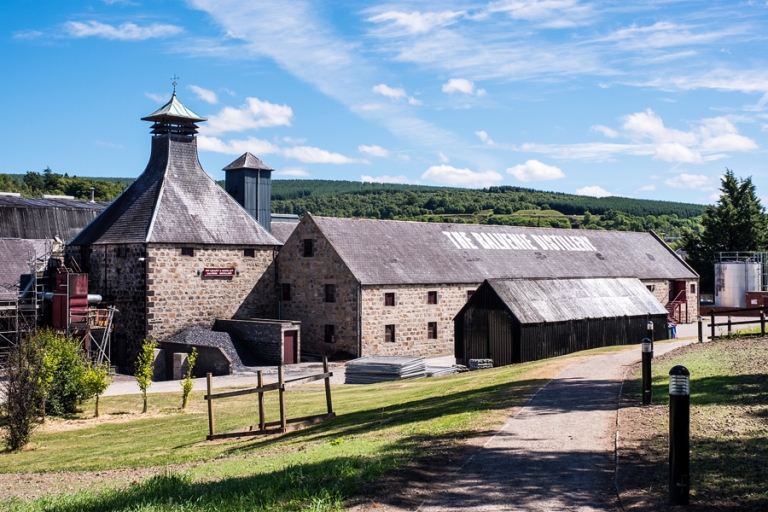 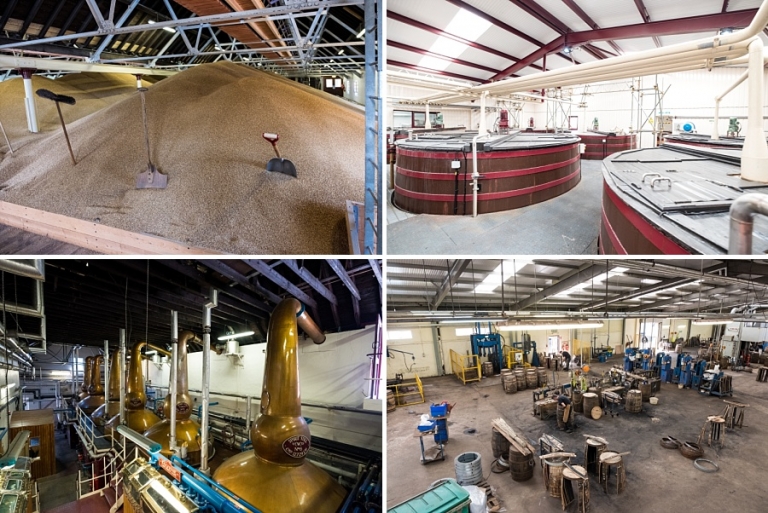 The Balvenie tour also offered one of the most generous and informational tastings of all the distilleries we visited. We tasted seven samples, including a 30-year-old, the oldest whisky we’ve had the opportunity to try so far! 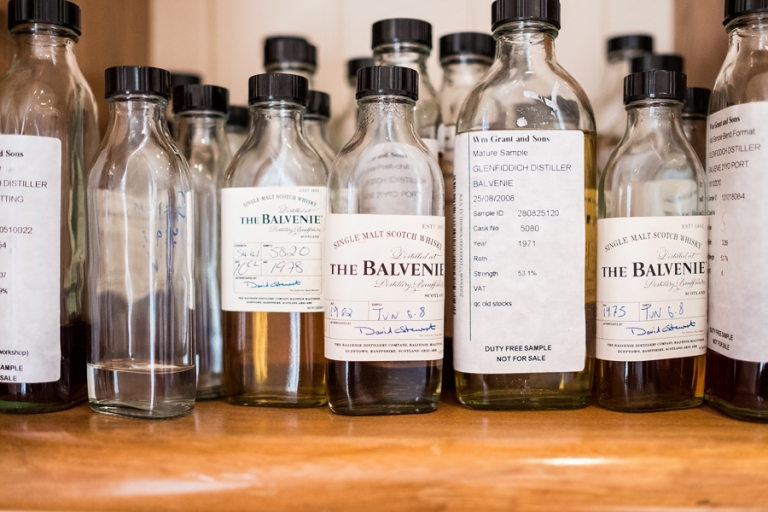 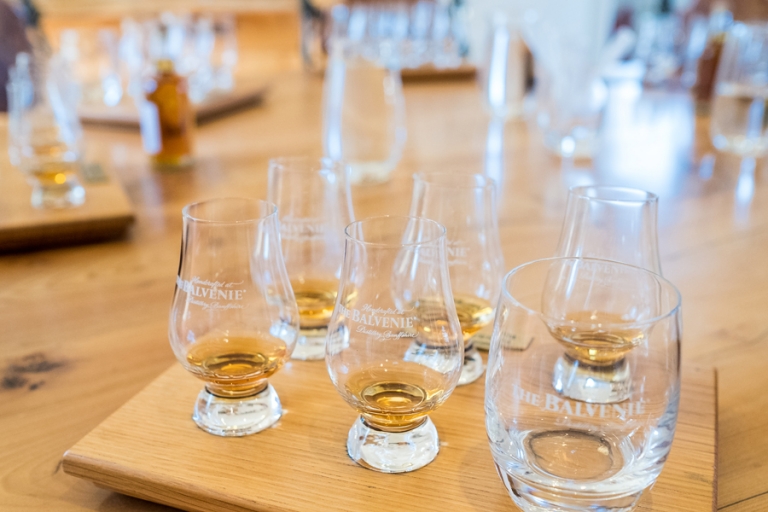 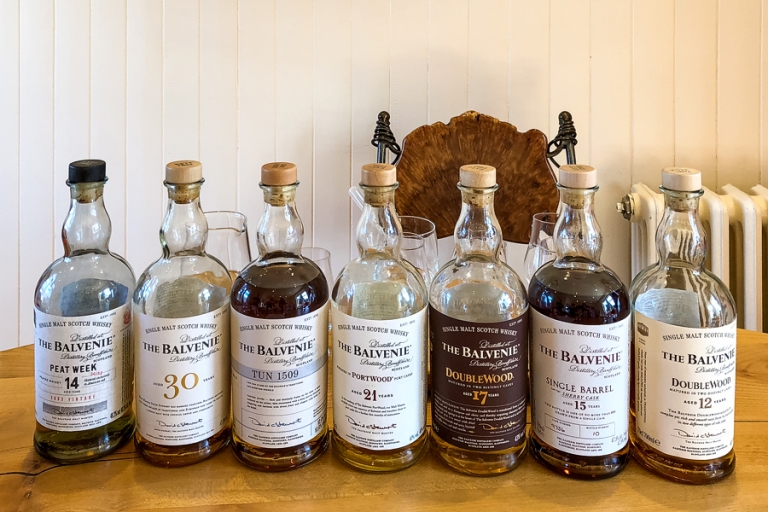 After our tour, we popped over to Balvenie Castle to explore and take some photos and video with the Mavic. We didn’t see any other visitors on the property (one of the main drone rules in most places is not to fly over crowds or within a certain distance of people in general), so I took the opportunity to fly for a few minutes and record some really cool video footage. Unfortunately I was shooed away by a staff member because there is a residence across from the castle (that I wasn’t filming at all) so for privacy reasons she didn’t want me to fly there. Oops! 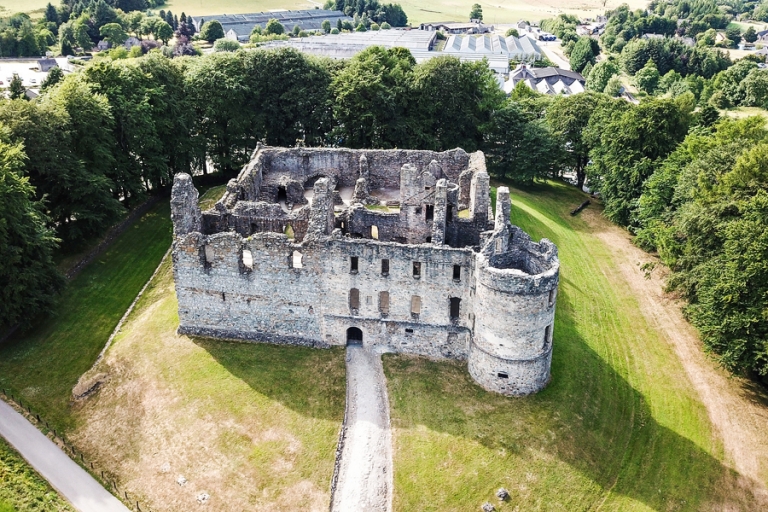 I had also hoped to take an aerial photo of the Craigellachie bridge, but there were a few people nearby so I didn’t do any flying there. We stopped by a few times actually, and always saw people on the bridge or on the beach below. It’s a popular spot!

Tired from our travels, tour, and tasting, we returned to our hotel in Rothes, The Station Hotel,  for dinner – more on our accommodations in an upcoming post.

The next morning we started Day Two with a tour at Aberlour (whisky drinking at 10am is perfectly acceptable in Speyside) where the highlight was a fun guessing game during the tasting. Our guide gave everyone in the group four unmarked samples and asked us to smell them and match them to the casks we smelled earlier on the tour. Guess who was the first to get them all right? The non-whisky drinker on the tour: me! The nose knows. 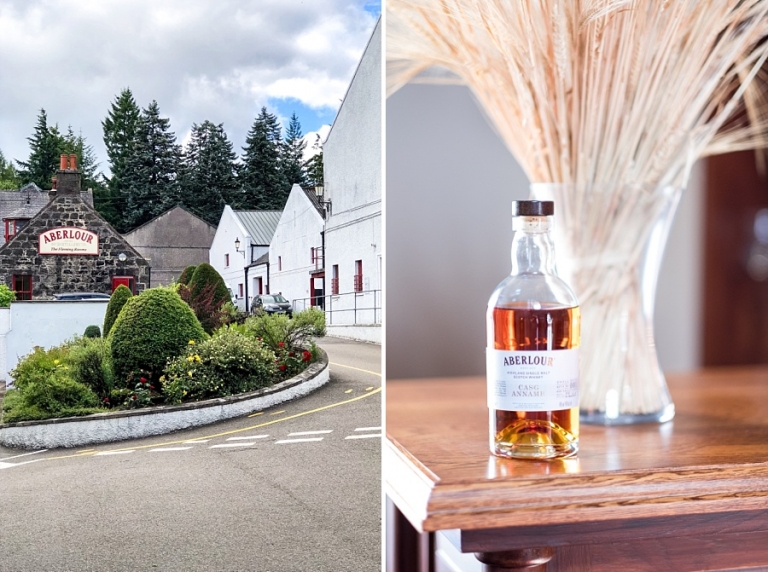 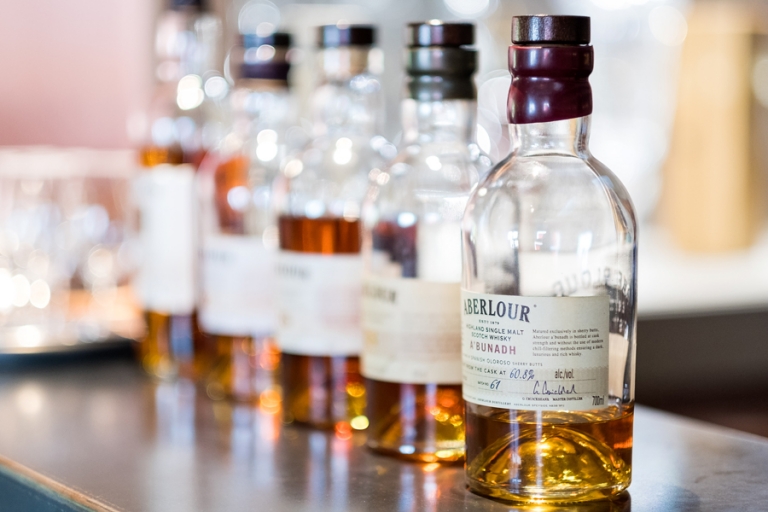 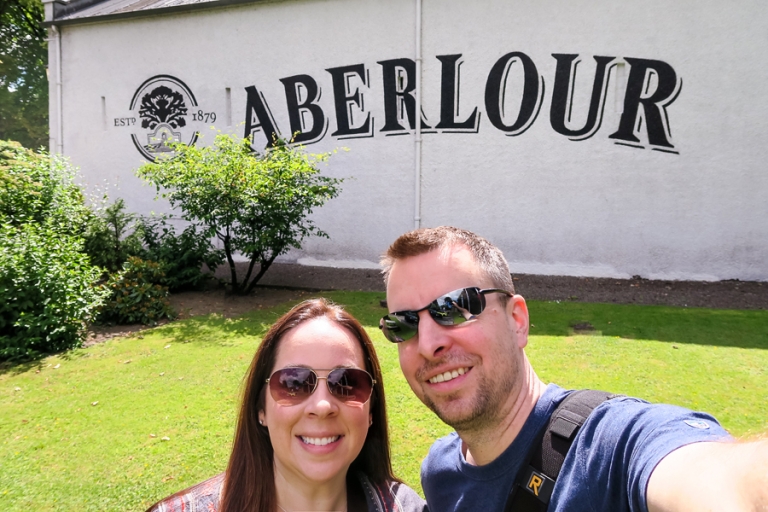 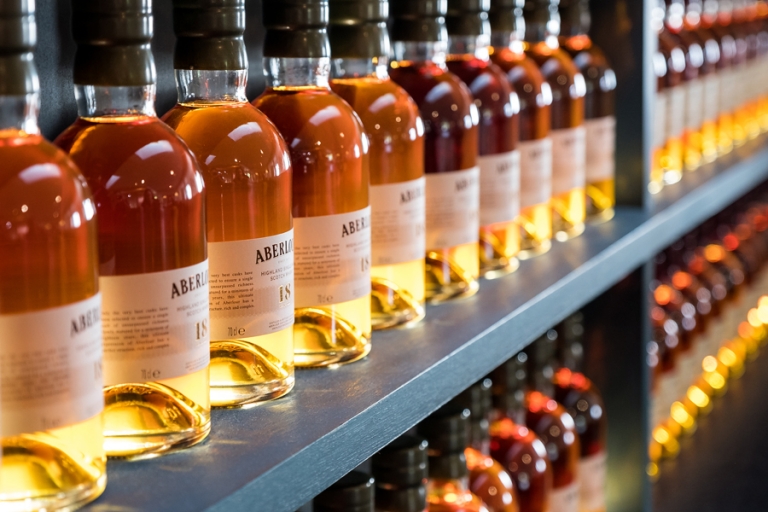 For lunch Chris and I ate at the super cozy and iconic Mash Tun whisky bar where we tried haggis in nachos-form. It was tasty! Afterward we headed over to the famous Walkers Shortbread shop to buy and eat as much shortbread as we could. Note that the shop (not pictured) is next to the manufacturing operation in Aberlour, but there isn’t a tour of the factory which is kind of a bummer. The shop does have an extensive selection of shortbread including several products that are unavailable back in the States though. 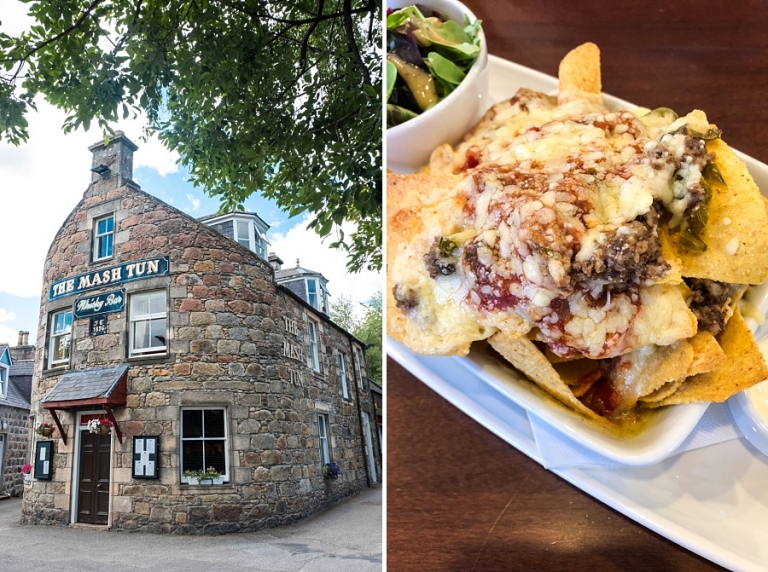 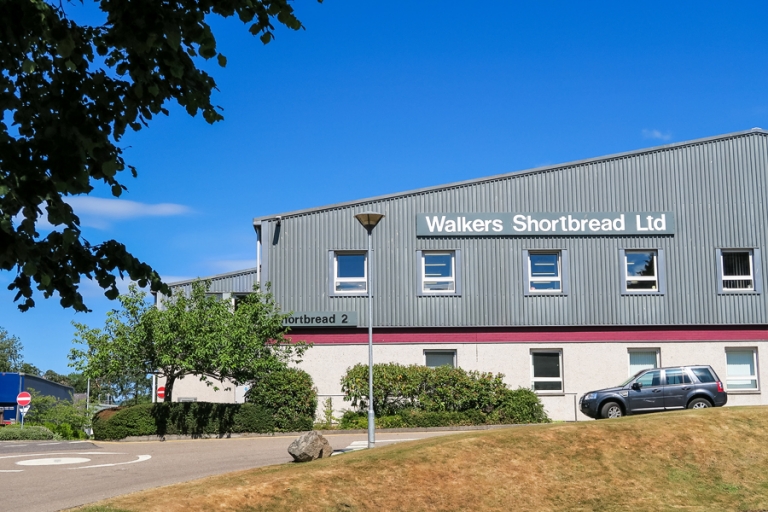 Bellies full from lunch and shortbread, we headed to Strathisla which was a late addition to our itinerary so we didn’t have a tour booked, but we were able to do a small tasting in their beautiful visitors’ centre. Even if you don’t have a tour booked here, it’s worth stopping by to see the famous and picturesque twin pagodas. 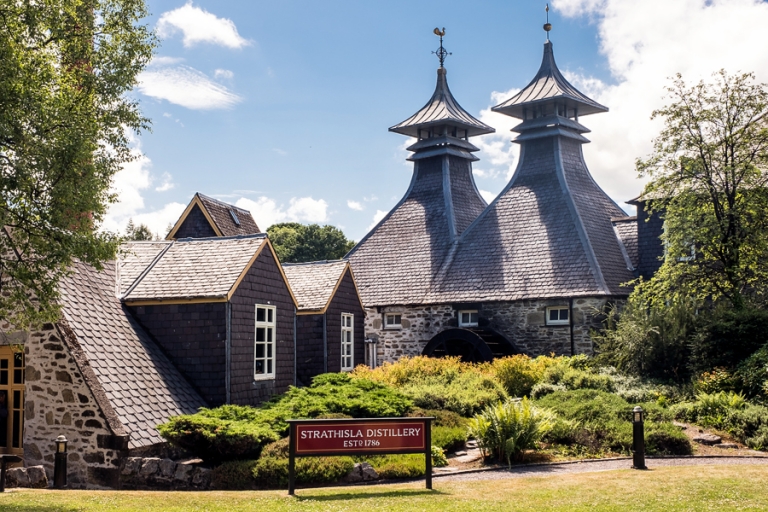 We ended our day with a tour and tasting at Glenfarclas, our first Glen (which translates to “valley”) of the trip. Look at those skies – how lucky were we with this weather?! And before you wonder if I was toured-out at this point, oddly the visits were different enough that I wasn’t bored with learning about whisky. I’m not sure what Chris’s threshold is, but eight distillery visits (five full tours) ended up being a good amount for me. 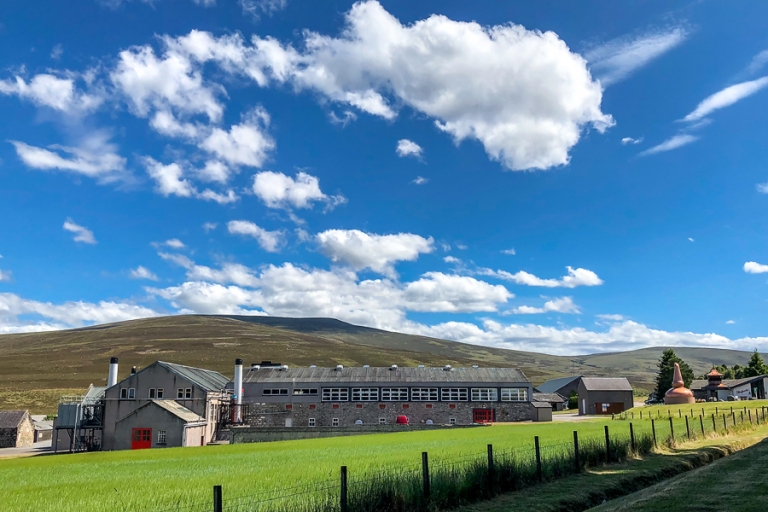 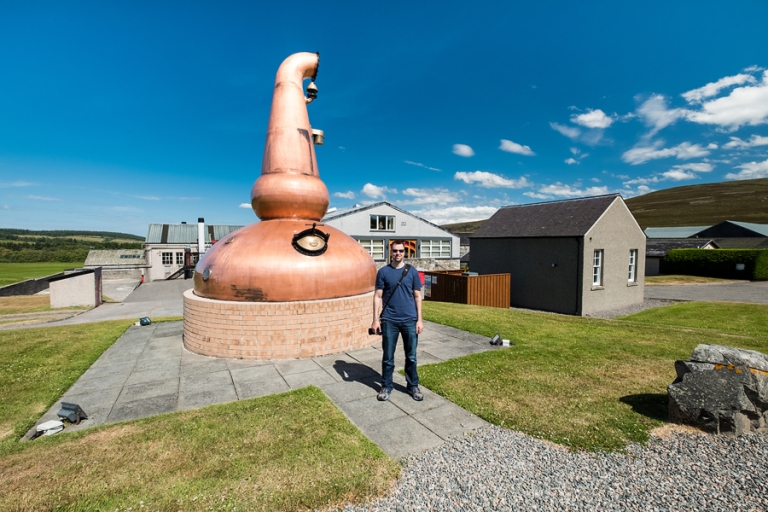 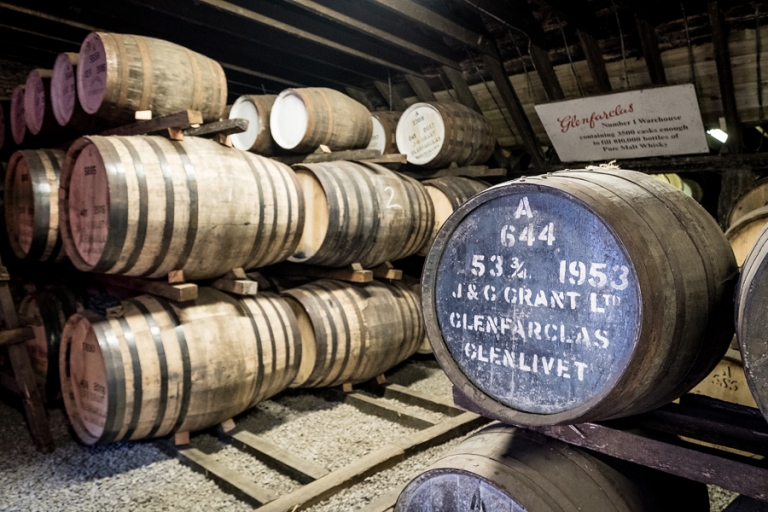 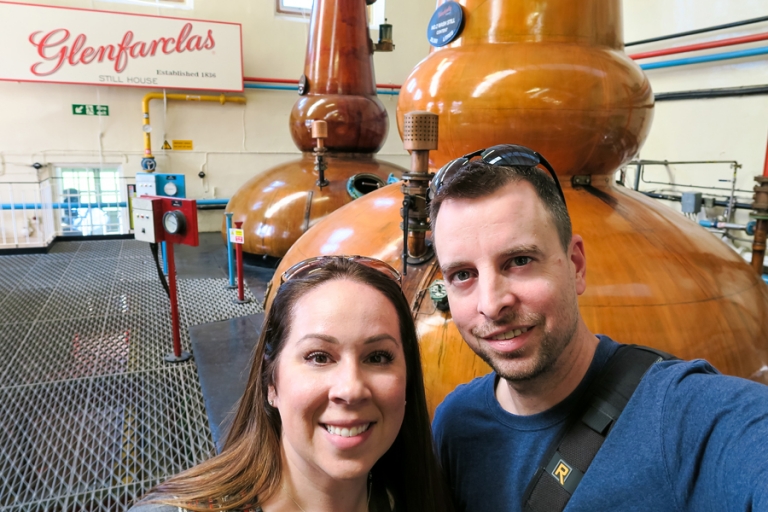 Not only for the convenience but also for the delicious food, at the end of Day Two we ate dinner at our hotel again, which is rare for us. We normally like to try as many different places as possible, but the restaurant at The Station Hotel is fantastic.

Since this post seems long enough already I’m going to stop here – stay tuned for the second half of the story! It’s a jam-packed Day Three with the remaining four out of eight distilleries.