From Höfn to Húsavík: The Eastern Fjords and Mývatn

So far on our road trip we were treated to an incredibly rich variety of landscapes including farmland, lava fields, glaciers, mountains, a black sand beach, and terrain that I can only describe as spongy moss-covered hills. On Ring Road Day Three, we spent the morning weaving in and out of the eastern fjords along the Atlantic, and in the afternoon, the mysterious landscape of Mývatn couldn’t have looked any more different than if we were actually on another planet. I’ll get to that, but first the east coast.

This was the longest day of driving for us with over 400 km between our overnight stays in Höfn and Húsavík, so we didn’t get out to stop as much. Not as much just means every half hour or so instead of every ten minutes. Actually for the drive through the eastern fjords we mostly just enjoyed the view from the car, and what a gorgeous view indeed. You can also see from the photos below that we were gifted with perfect weather! I even had to wear my sunglasses that day. 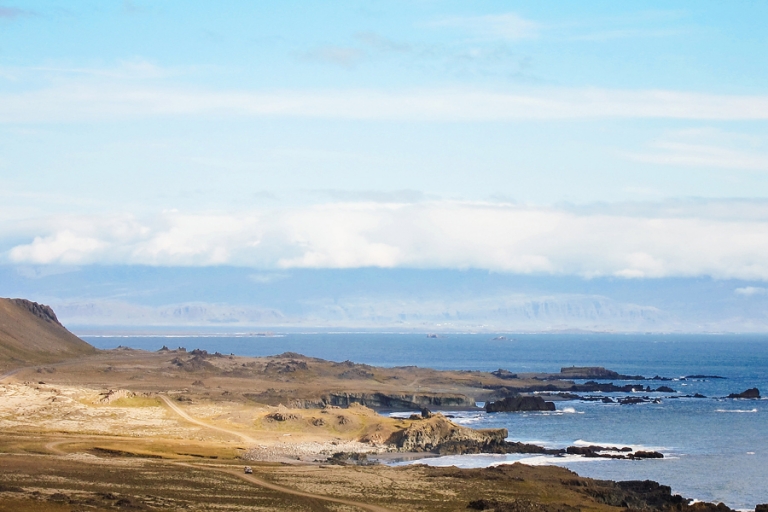 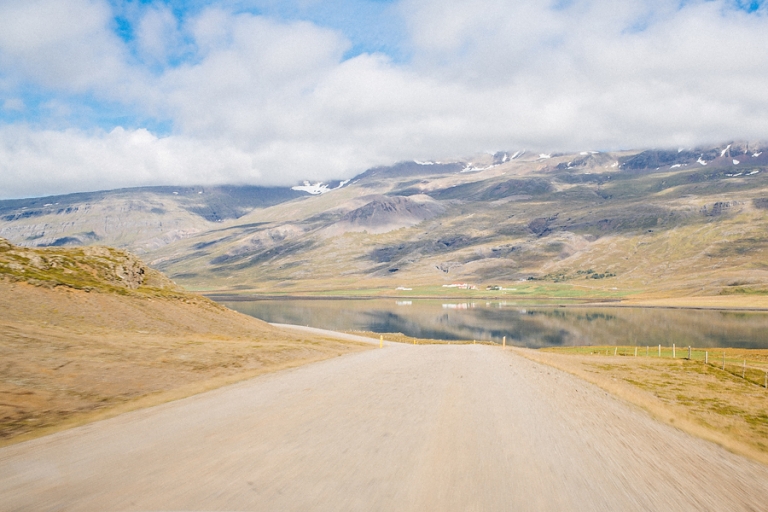 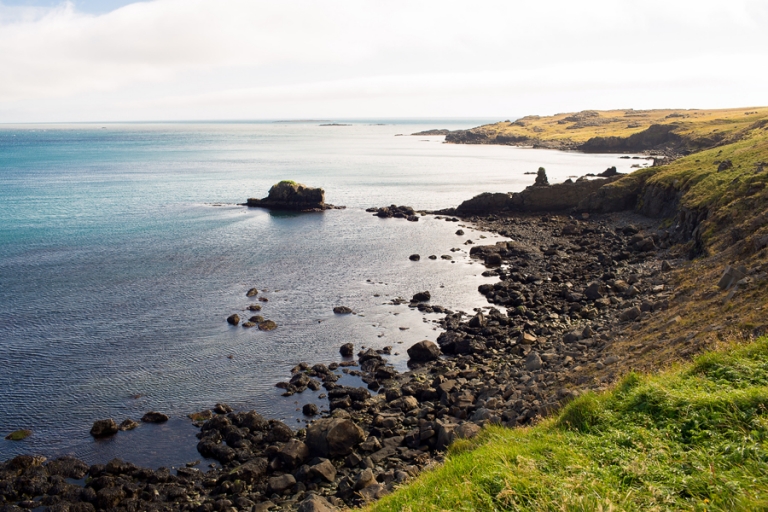 It did take several hours to trace along the edges of the fjords, so we stopped mid-day for lunch in a cute harbor town called Reyðarfjörður (population: 1102). And as I mentioned, in the interest of time we were really trying not to stop too often so that we would arrive at Mývatn with plenty of time to explore, but when I saw this waterfall shortly after lunch we had to stop. I didn’t feel like I had a truly solid waterfall photo that I loved at this point, and with the weather behaving so nicely I couldn’t pass up the opportunity to try a long exposure waterfall shot one more time! The photo below of the lower part of the falls is one of my favorite images from the trip. I have no idea what the name is (probably something “-foss” right?), but it’s somewhere between Reyðarfjörður and Dettifoss and easily spotted from the road if that helps. It’s a very picturesque little place, and one or two other cars pulled over to join us while we were checking it out. 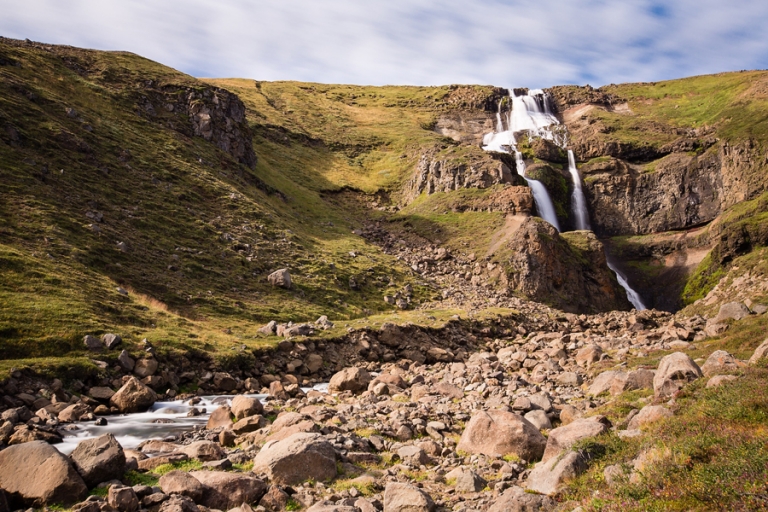 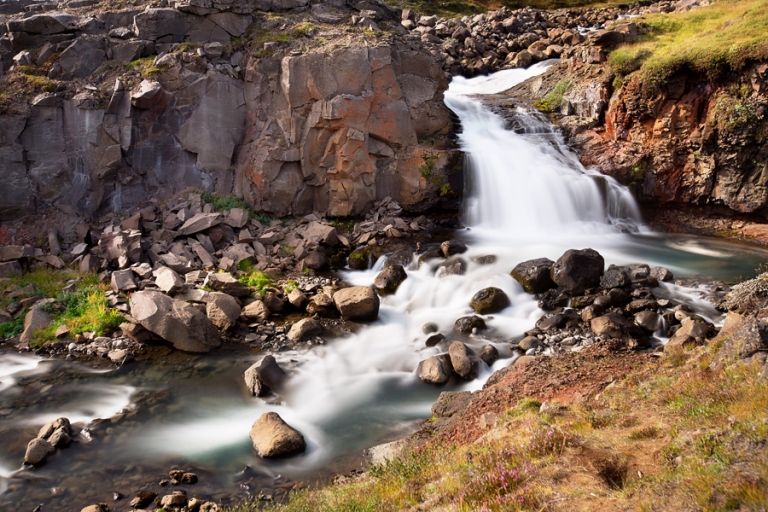 Speaking of Dettifoss (or “dental floss” as Chris kept calling it), that was our next planned stop only we weren’t sure we’d be able to see it. Just days before our trip, Bárðarbunga showed signs of imminent eruption and the road to Dettifoss was closed as a precautionary measure. For that reason, I had mentally crossed the waterfall off of our list until we approached an open road with a sign pointing to Dettifoss! We figured if it wasn’t safe it wouldn’t be open, so we turned off Rt. 1 onto an unpaved very bumpy road and off we went to see the most powerful waterfall in Europe. 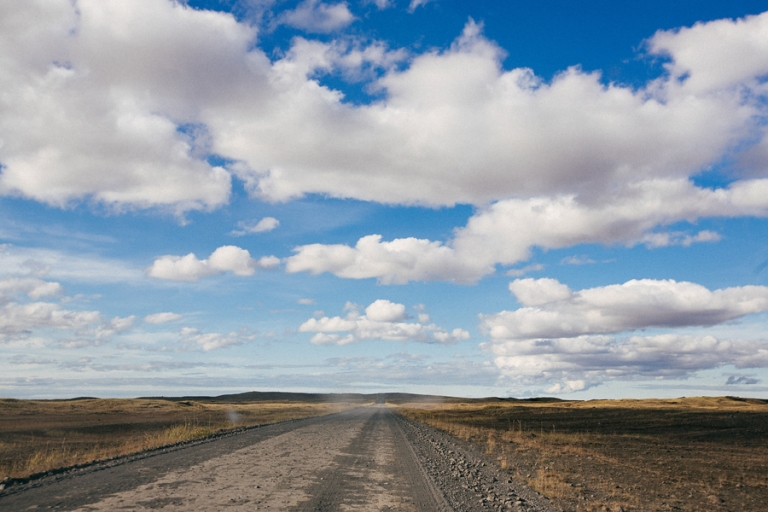 Dettifoss might be the most powerful, and it is pretty, but it perhaps it’s not THE prettiest waterfall on account of the muddy water. The massive amount of midge flies in attendance didn’t help either. I do like the shot below that Chris took of the spray with a few people in silhouette. I think if we had been on the other side, there was probably enough sun to result in a rainbow over the falls, but we were short on time. We were glad to see Dettifoss, especially since it played a prominent roll in the opening scenes of Promethius (a movie that Chris enjoyed; I did not), but the amount of time it took to get there might not be worth it to everyone. I suppose it just matters how much time you have to spare. The road on Google Maps looks like it’s about 20 minutes, but because of the pothole-y-ness of the road, it took us about 45 minutes. We kept driving and driving and wondering where in the world the waterfall was and if we were even going the right way. So if you go, just know that it takes a while to get there and that it’s slow going even in an SUV, but a fun ride nonetheless! 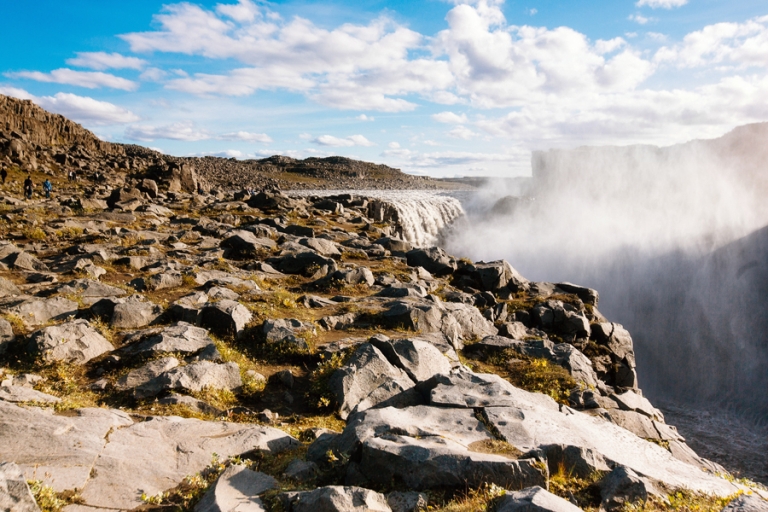 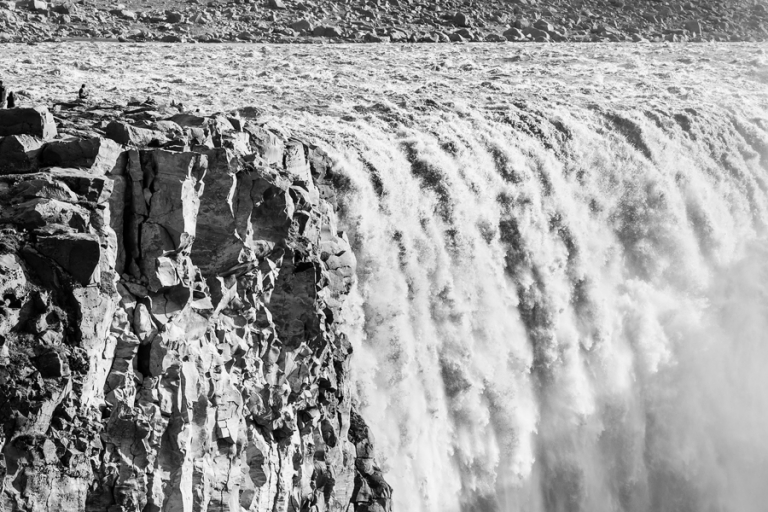 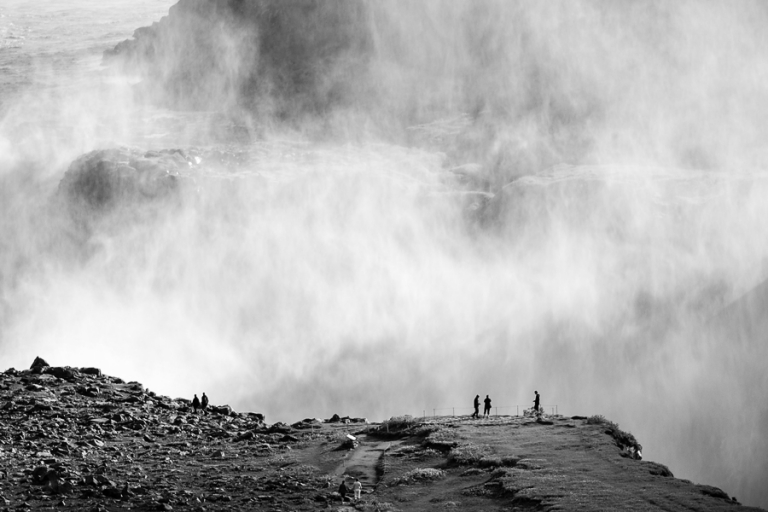 Once we were back on Rt. 1 after our Dettifoss visit, we immediately came across the road that leads from the north to Vatnajökull, the huge ice cap that sits on top of Bárðarbunga. F88 was definitely closed and is still closed at the time of writing this post. We spent some time there taking photos and I also used it as an opportunity to send some please-don’t-ash-up-the-sky vibes to Bárðarbunga.

As the day slowly transitioned into evening, the landscape changed as well albeit quite dramatically. We arrived in the Mývatn area around 7pm, but no matter – we still had plenty of sunlight thanks to the cooperative weather and clear skies. We smelled our first Mývatn-area stop well before we spotted it. The geothermal area of Námafjall Hverir provides a close-up view of steaming fumaroles and bubbling mud pots, as well as an olfactory experience I’ll never forget. The combination of a strong sulfur smell and the hoards of midge flies didn’t encourage us to stay very long, but I found the area incredibly fascinating and almost not-of-this-world. It was there that I felt like I was walking around on Mars! This spot is another must-see for anyone with a passion for geology. 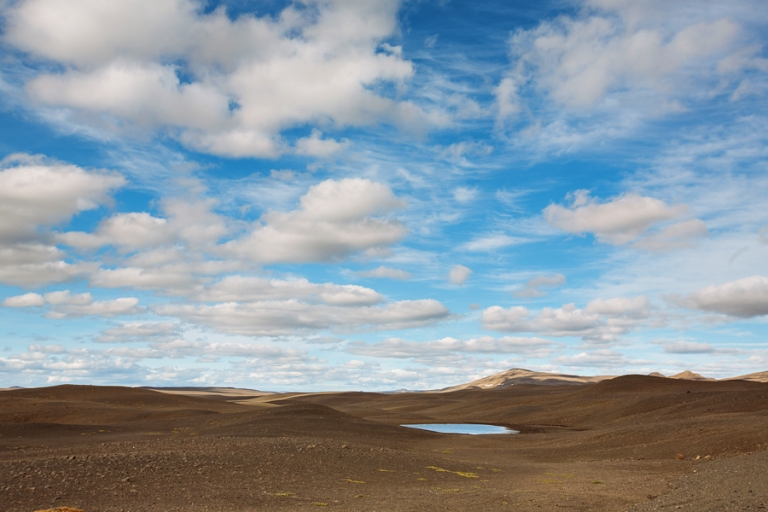 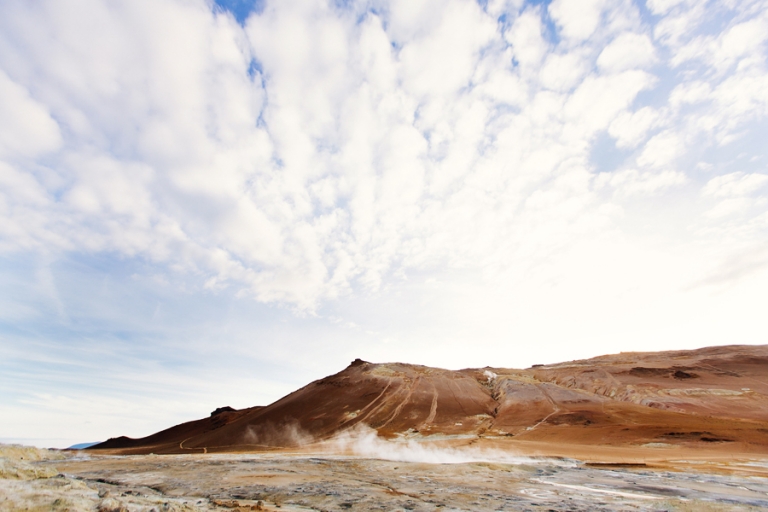 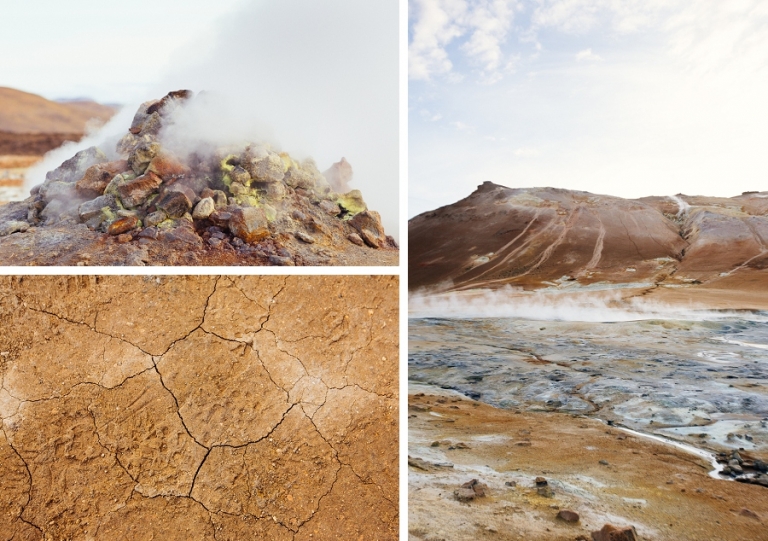 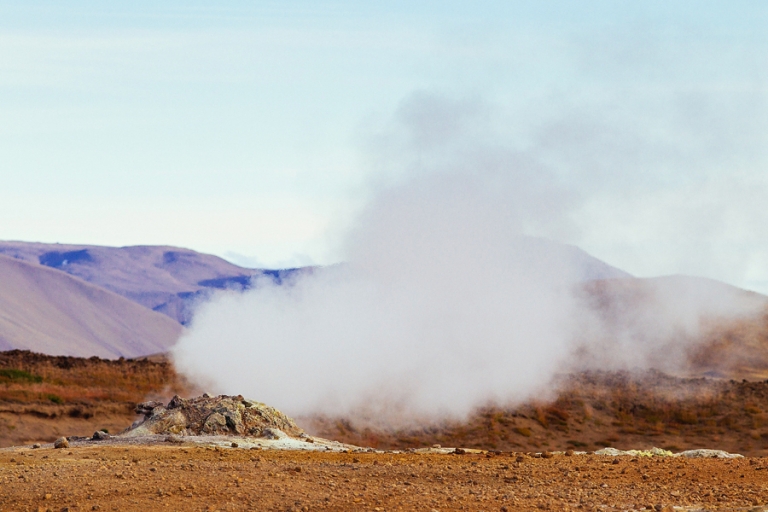 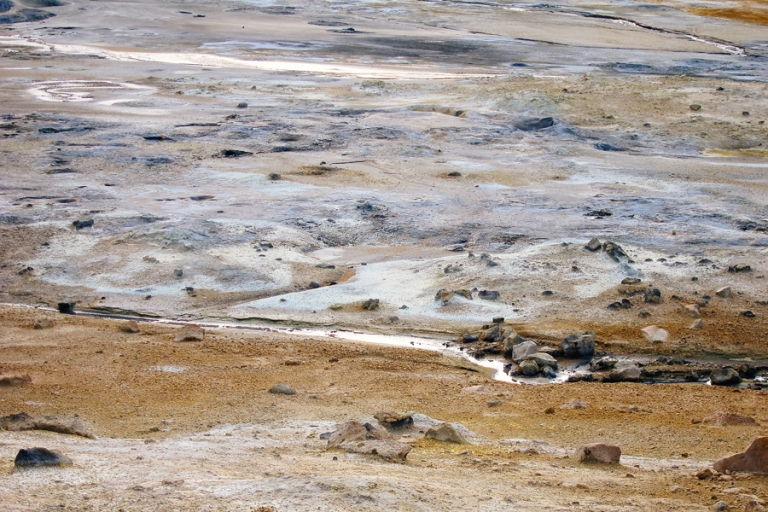 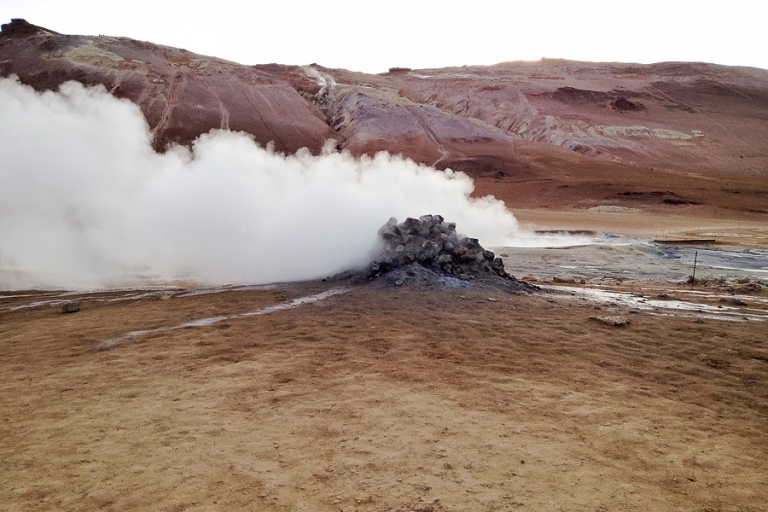 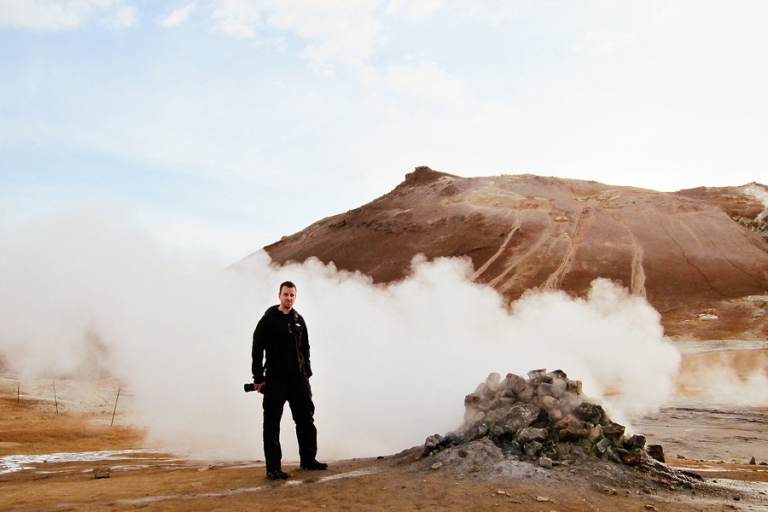 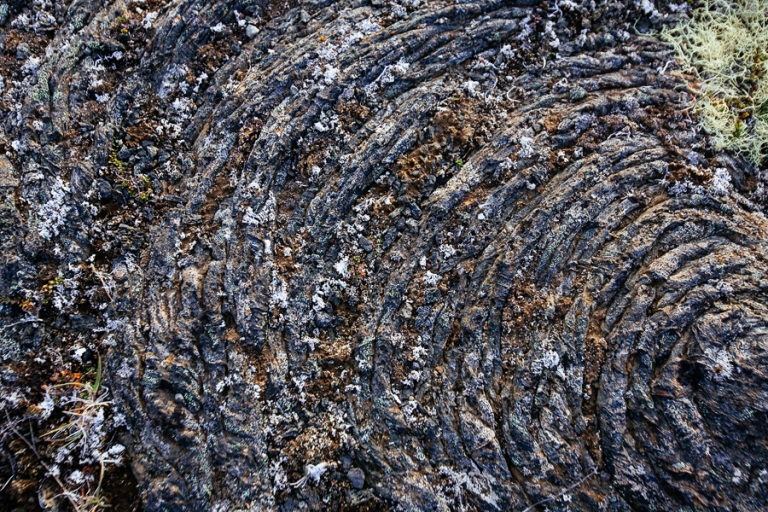 The last stop of the day before hitting the hay in Húsavík was this dark hole that I actually climbed into if you can believe it. Do you recognize it, Game of Thrones fans? It’s Grjótagjá, the small lava cave that was used in the Jon Snow & Ygritte cave scene. If you watch the show, you know the one. The cave houses a geothermal hot spring and my original plan was to take a quick dip here for posterity, but the sign outside the cave indicated that visitors are not allowed to bathe in there, and I am typically a sign-obeying kind of tourist. That, and once I was inside I pretty much wanted to get out right away. As you can probably guess, I am not all that fond of sitting in small, dark, enclosed spaces. We spotted some discarded undies inside the cave, so we do know that some rule breakers were here! 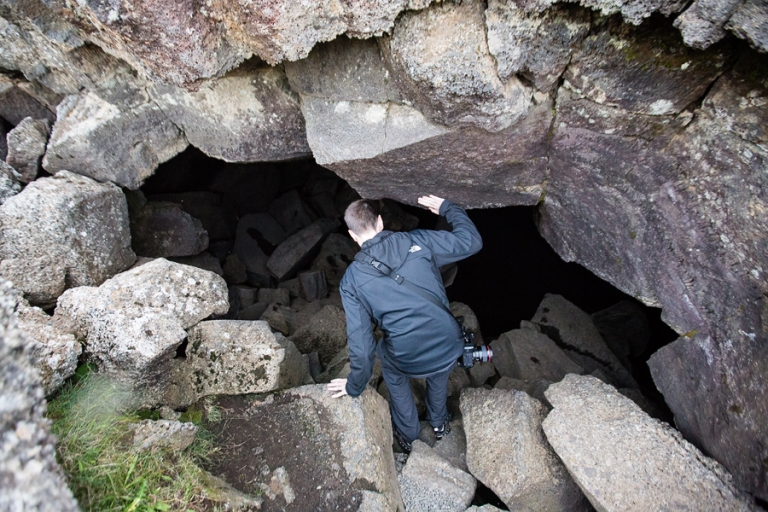 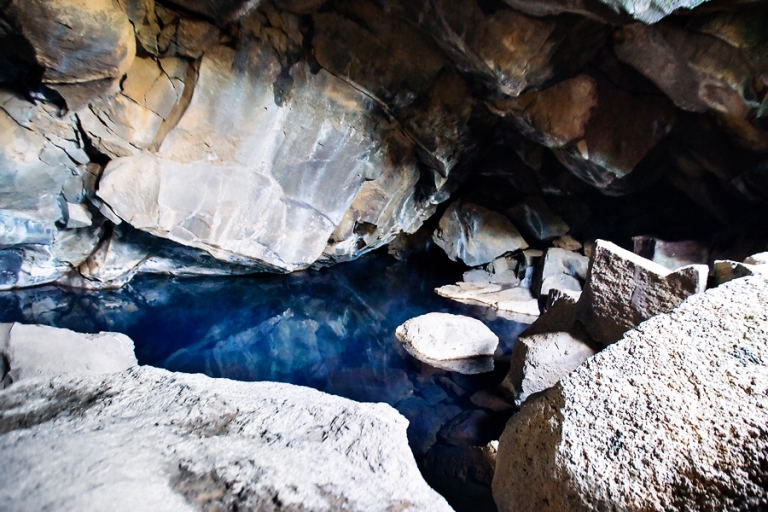 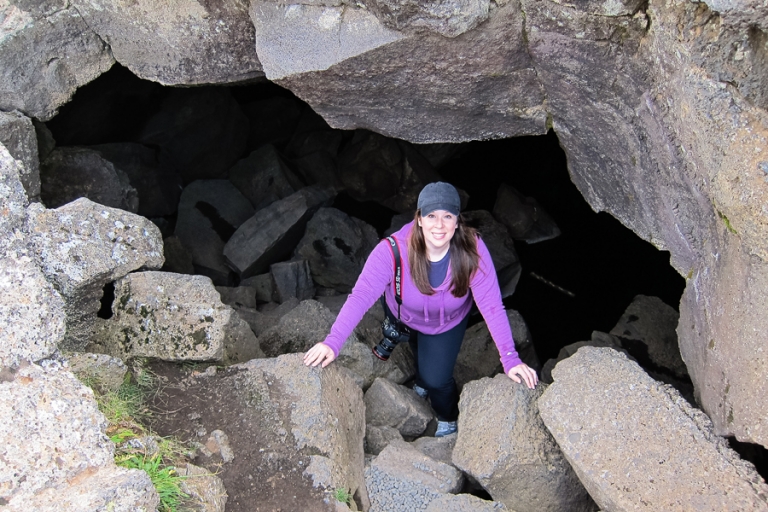 And just about twelve hours after our day on the road started, we ended it in Húsavík. The photo below was taken around 9pm with plenty of sunlight to spare! Gotta love those long daylight hours. Coming up: our fourth day on the road with a visit to Akureryi, nicknamed the Capital of North, and my first time ever horseback riding in Varmahlid! 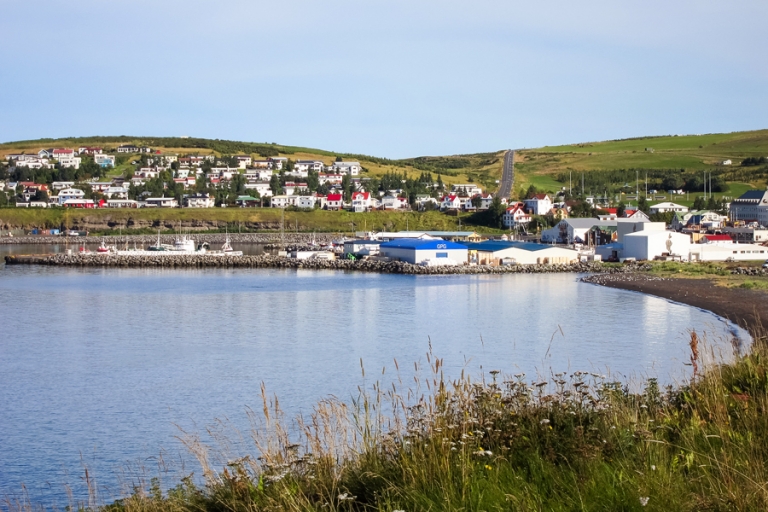