Chris and I just returned from a week on Grand Cayman, and we are smitten! What a beautiful, fun island. When we first started researching a year ago, we were looking for an island with good off-shore snorkeling. The Caymans kept coming up in my search for snorkel sites, so we decided to give it a try. We’re so glad we did! The whole island is beyond lovely, everyone we encountered was so friendly (we met people from England, Australia, France, and India), and I only ended up with two bug bites – a Caribbean island record for me! 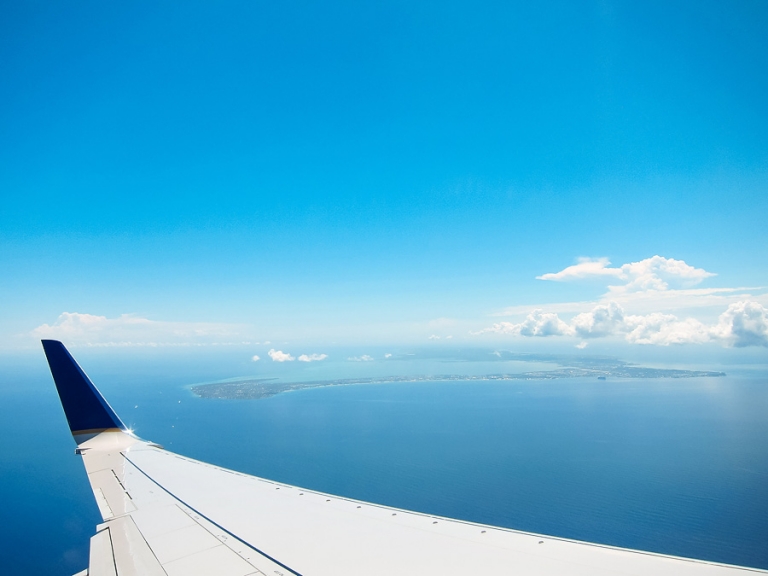 When and where it makes sense, Chris and I prefer to stay at a private rental if we can rather than a hotel for several reasons. I love having a home base where we can feel a little more like a local. We go grocery shopping for the week and eat a few meals at home instead of eating out all the time, so it’s a little more healthy. And most importantly, we enjoy having a quiet spot where we can enjoy the pool without listening to anyone yelling or screaming! And if you do some research, it’s not necessarily more expensive than a hotel – we tend to look just slightly into the shoulder season so that the rentals are much more affordable.

This time we ended up in an amazing villa in the North Shore area called Fish Bones. Long story short, the first two villas I picked were sold after I signed the contract, so we were offered a really great deal on this third choice. We couldn’t have ended up with a better house – the view of the ocean was mesmerizing, and we had an entry point into the water down some steps built into the cliff. Chris snorkeled there a few times and saw bar jacks, parrot fish, angel fish, various crabs, and we even saw an eagle ray and a southern stingray. I didn’t get in because there were a few spiny sea urchins hanging out by the steps and I’m clumsy! But I did spend quite a bit of time sitting on the steps, gazing at the water feeling peaceful. 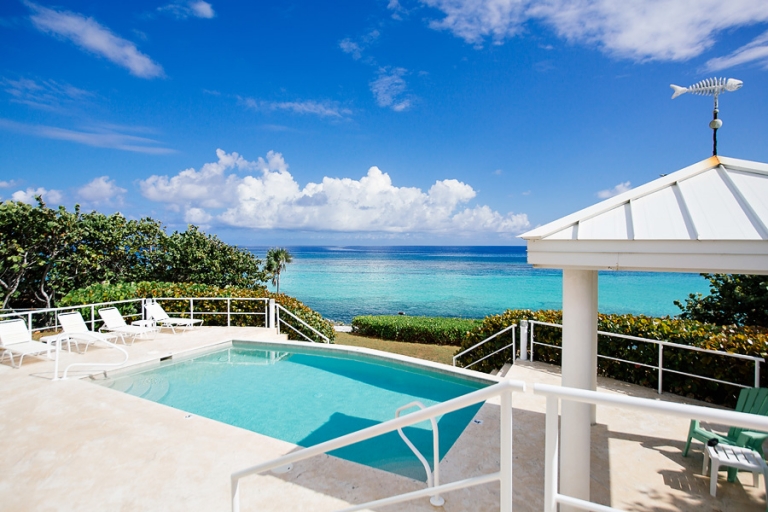 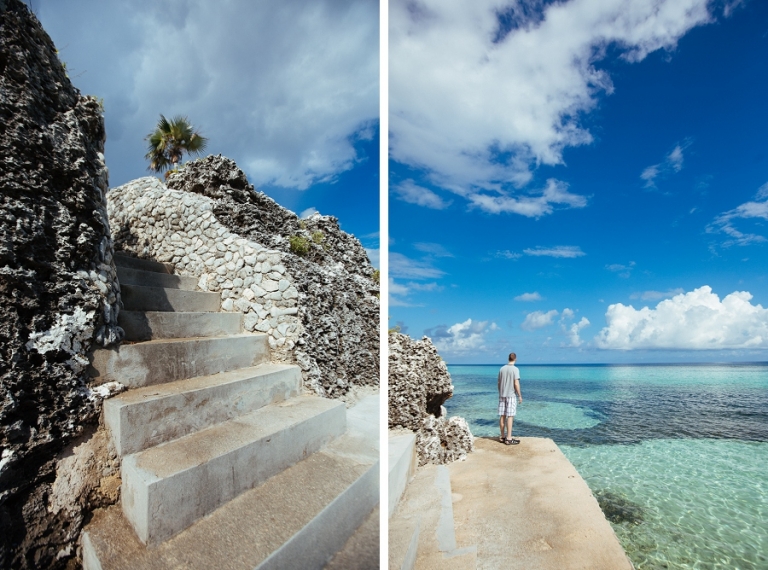 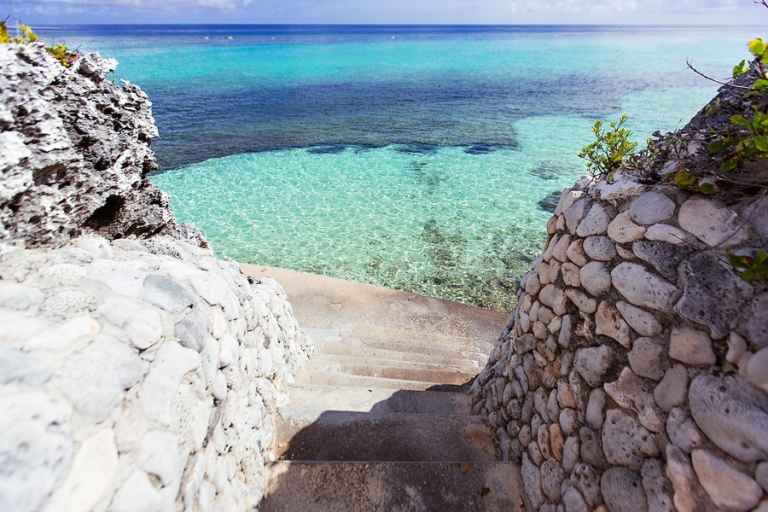 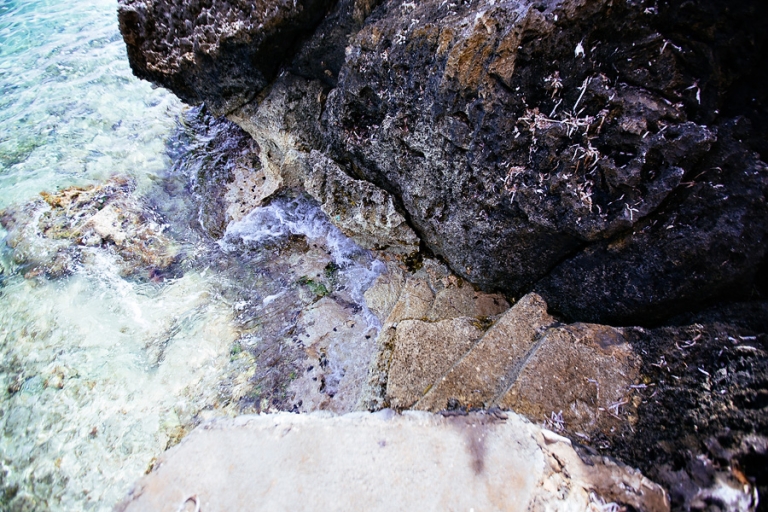 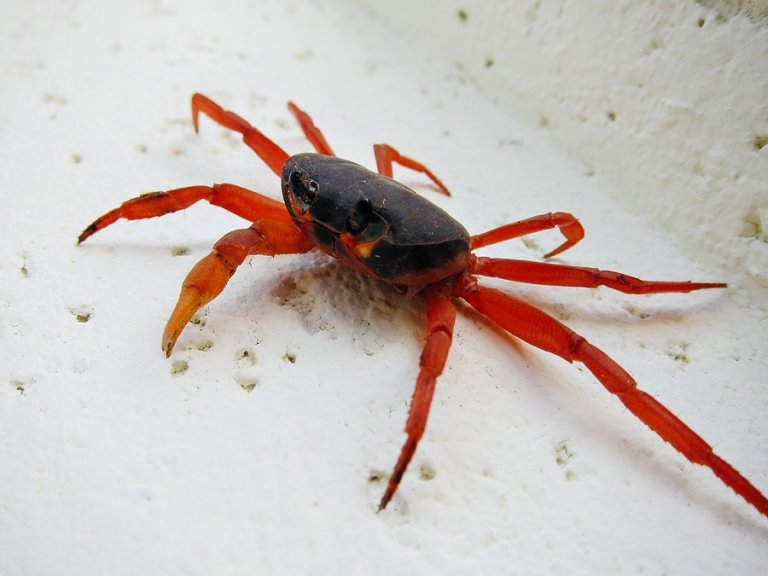 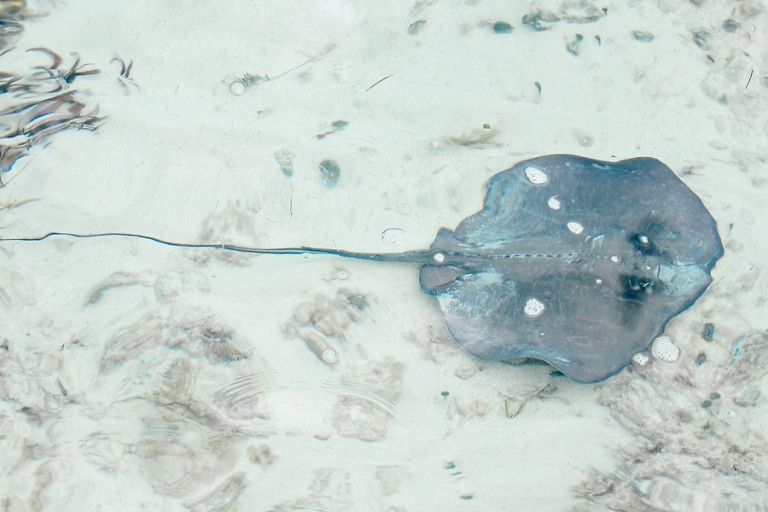 Staying on the east end of the island on the northern shore, we were pretty far from Seven Mile Beach (about a 45-minute drive), but we did go visit that side of the island a few times. If you’re looking for a hotel or resort situated on a gorgeous beach with access to lots of restaurants, amenities and activities, this should definitely be a major contender for you. We ate lunch on SMB one day and enjoyed the soothing ocean views and fish-watching. The tarpon are huge! We also hung out in George Town a couple of times and spent an afternoon in West Bay. 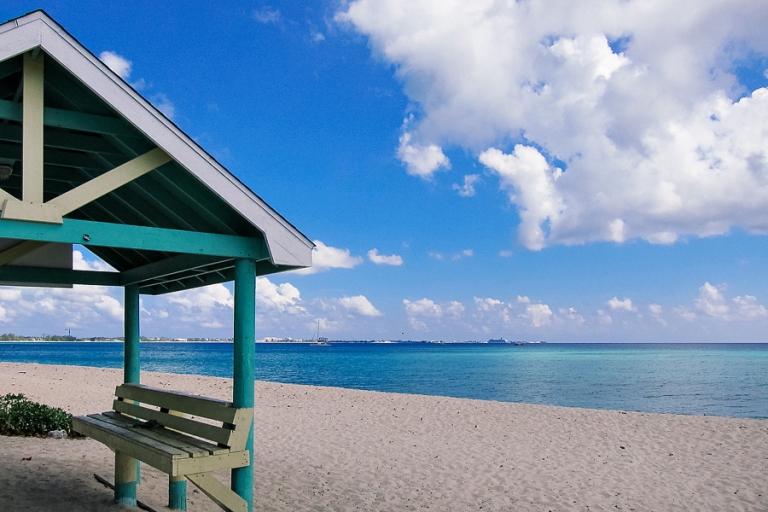 Sadly, on Monday Chris got really sick from something he ate – we narrowed it down to some tartar sauce that accompanied our fish & chips at a restaurant in George Town. We tend to share everything when we eat out, but I am NOT a fan of creamy white sauces and didn’t eat it, so we’re 99.9% sure that’s what it was. So unfortunately, we had to cancel our scuba dive trip that was scheduled for Tuesday. I had mustered up the courage to try diving and Chris was excited about it, too, so we were disappointed, but it’s not at all safe to dive while you’re sick so it was necessary to cancel and we ran out of time to reschedule. We fully intend to try again on an upcoming trip – we have Belize and Vieques trips planned for next year, so one of those spots might work!

Thankfully, Chris was feeling a little better by Wednesday so we could do some gentle island exploring including the Queen Elizabeth II Botanic Park to see Cayman parrots and blue iguanas. The parrots were adorable! The one blue iguana we saw was lethargic, but interesting nonetheless. 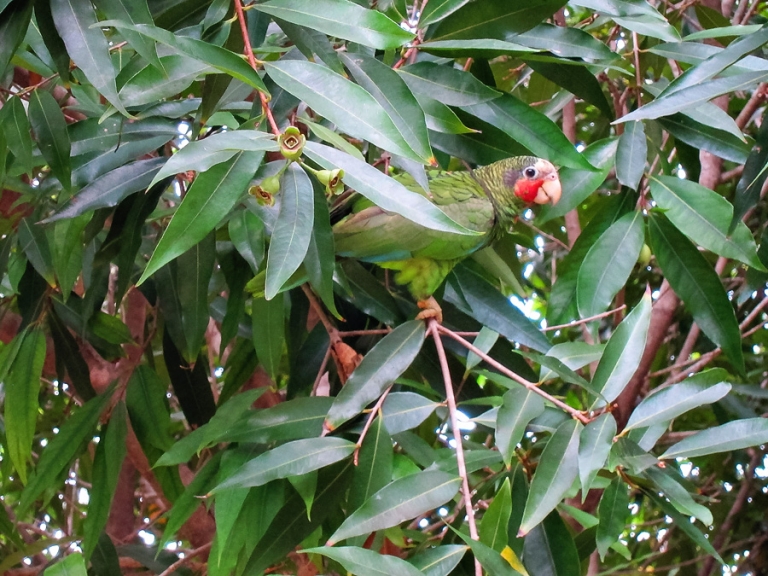 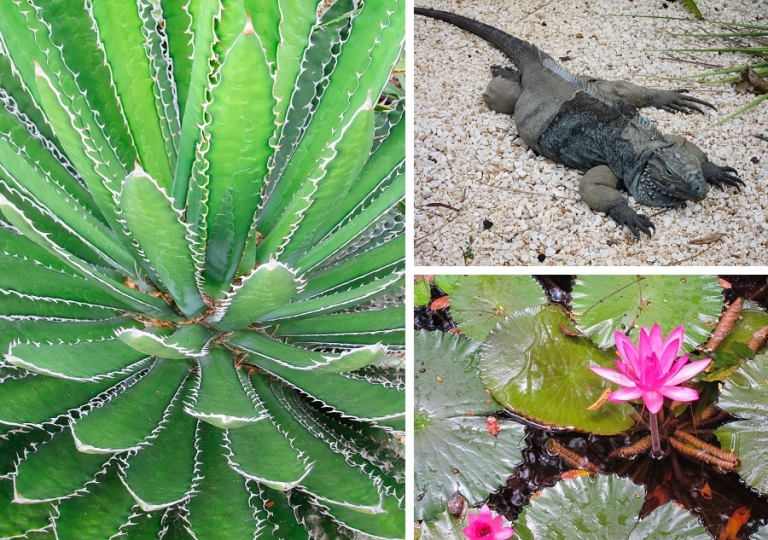 We also explored Starfish Point which was super cute – we saw about a dozen sea stars, sprinkled throughout the shallow area of a small, secluded beach. They’re fascinating little creatures! Unfortunately, their numbers are dwindling in that area because irresponsible tourists take them out of the water for too long or even take them home which breaks my heart. I picked one up very carefully and completely beneath the surface of the water for a few seconds to take a photo, then gently placed him/her (?) back in the soft sand. It was a really cool experience, and I’m glad we got to see them before they inevitably disappear. I almost wish someone could stand on the beach all day and tell people not to remove them from the water. (I would love that job.) 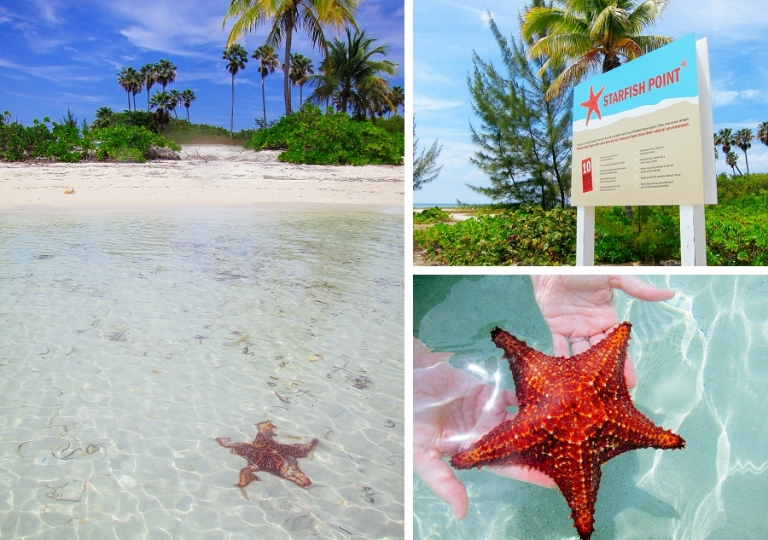 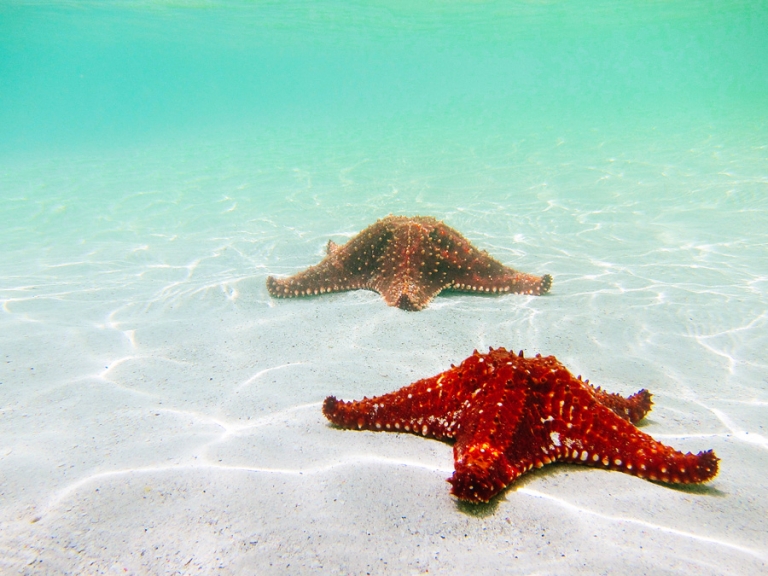 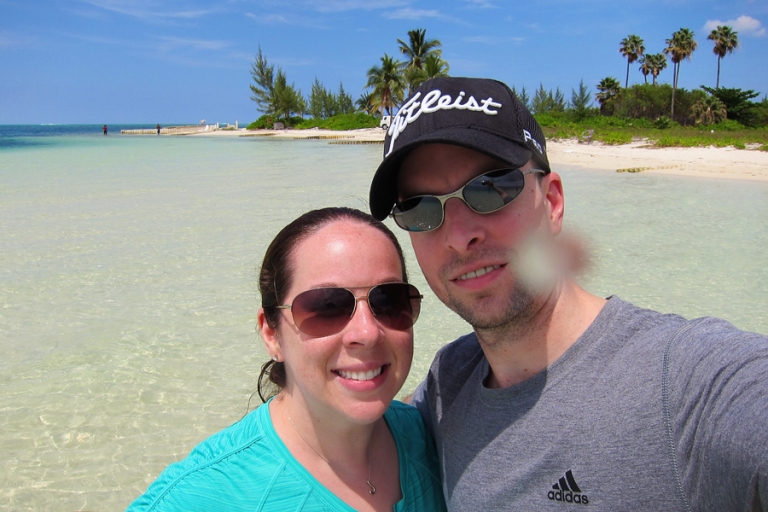 We actually ended up driving the entire perimeter of the island throughout the week, but most of our time was spent closer to home. We poked around a lot in East End, Rum Point, and Old Man Bay. (Side note: Chris did most of the driving since he’s better at driving on the left-hand side.) There was plenty to keep us busy all week in those areas – restaurants and bars, a sculpture garden, various historical wreck sites, and we also visited some fascinating blow hole sites along the southern shore only 10 minutes away. If we have the chance to go back to Grand Cayman, we would definitely stay in this area again for the peace and undisturbed natural beauty. 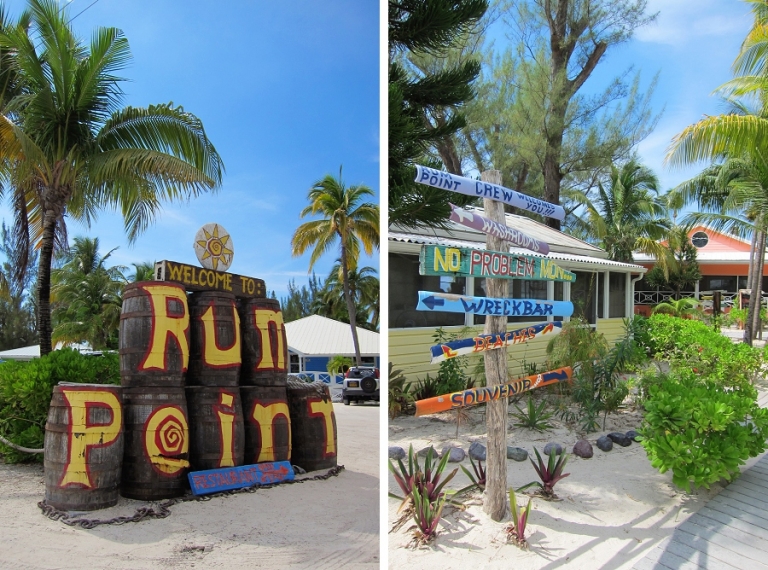 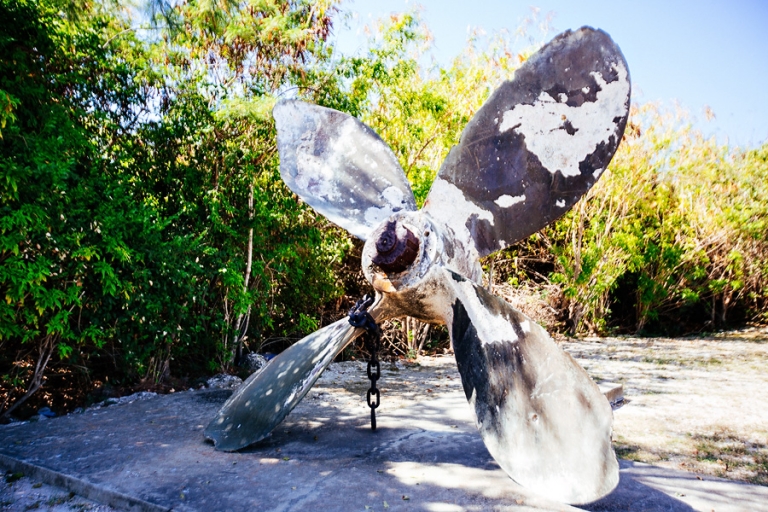 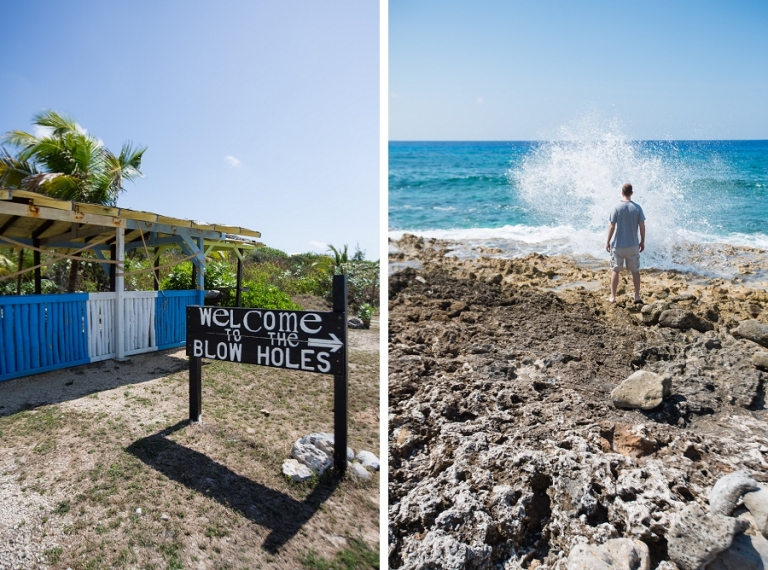 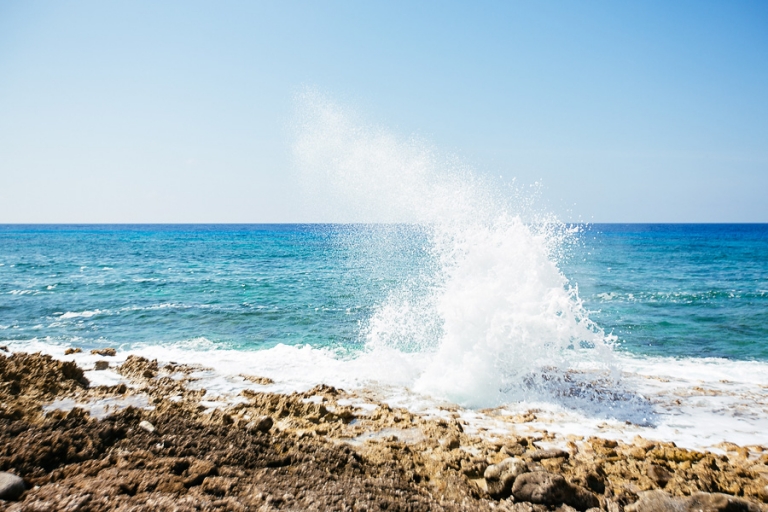 By Thursday, Chris had recovered and was up for some adventure, so we didn’t have to cancel our trip to Stingray City – yay! It ended up being one of the highlights of our trip. Fat Fish Adventures took us out on jet skis for a thrilling tour of the island – we rode through the mangroves, stopped at Starfish Point and the Stingray City sandbar, and we ended the tour with a bit of snorkeling in the Coral Gardens area of Rum Point. I have to admit that I was nervous about this whole excursion! I had only ever jet skied on a sound in Florida where the water was calm. I read reviews of this tour that said you ride in open water where the waves were generally pretty rough, so I envisioned being flung from the jet ski into the ocean where I’d immediately be surrounded by swarms of jelly fish, sharks, and barracuda. (I do know the sharks and barracuda in the Caymans are typically harmless, but in my imagination they are not.) Chris was an excellent jet ski driver though, and even hitting waves at 50+ mph we never tipped over, so I had a blast. 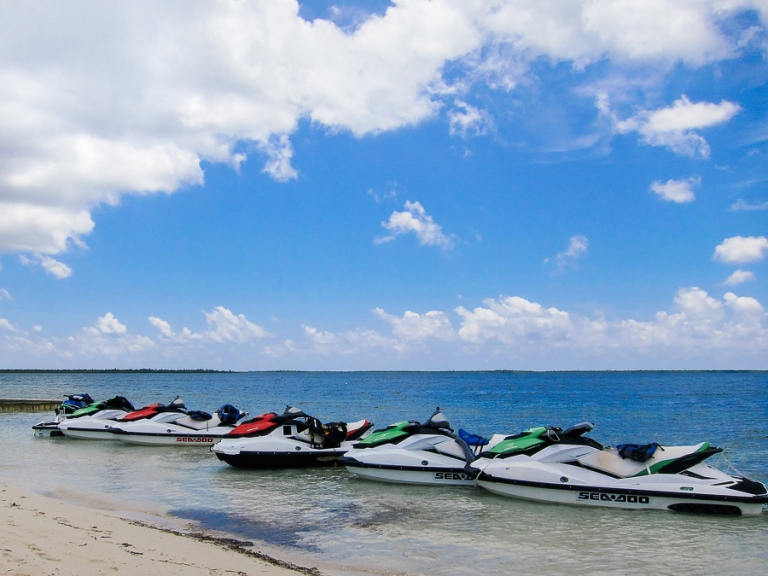 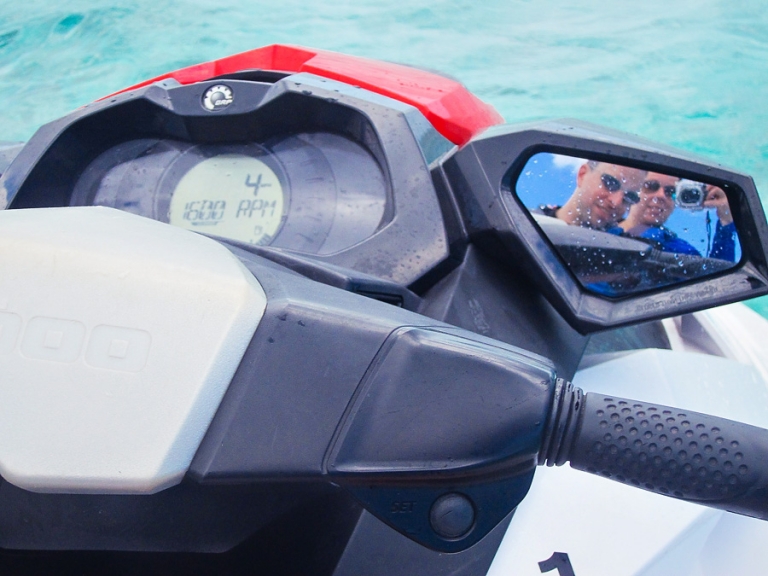 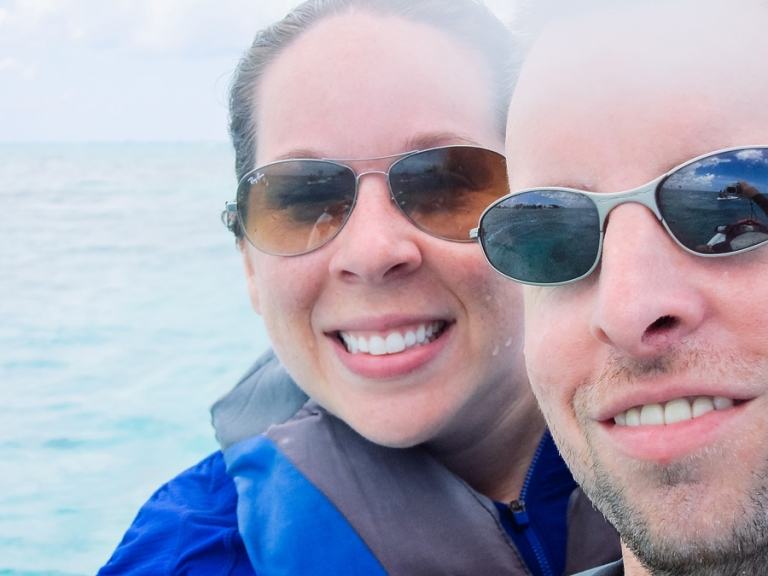 I had also never jumped off a boat or other watercraft into open water, and knew that I’d be expected to do this twice on the tour, so that made me nervous as well. As I’ve mentioned, I’m pretty terrified of the ocean! Or so I thought – I think I might actually be getting over that fear. When we arrived at Stingray City, we saw huge shadowy figures in the water and I was shocked at how big the stingrays were! But somehow I got in the water anyway, and instantly became fascinated. Cautious, but fascinated. I opted out of holding one or getting a “back massage” from one of these magnificent creatures because I just don’t feel like we were meant to interact with them in that way, but I did gently pet one. They were, after all, brushing up against my legs like sweet, friendly kittens. We also saw a cute spotted trunk fish (see below – Chris took a great photo of it). 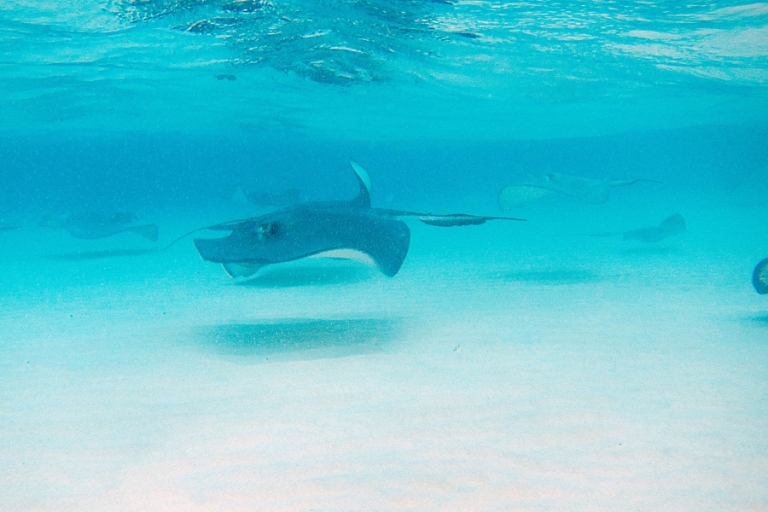 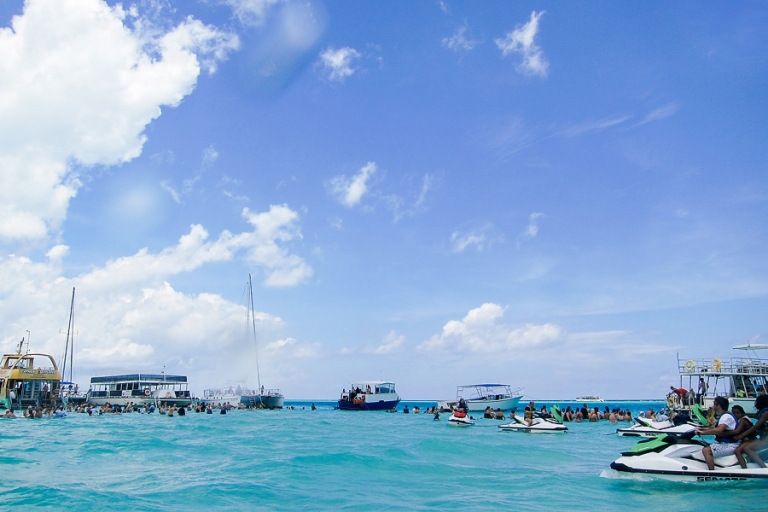 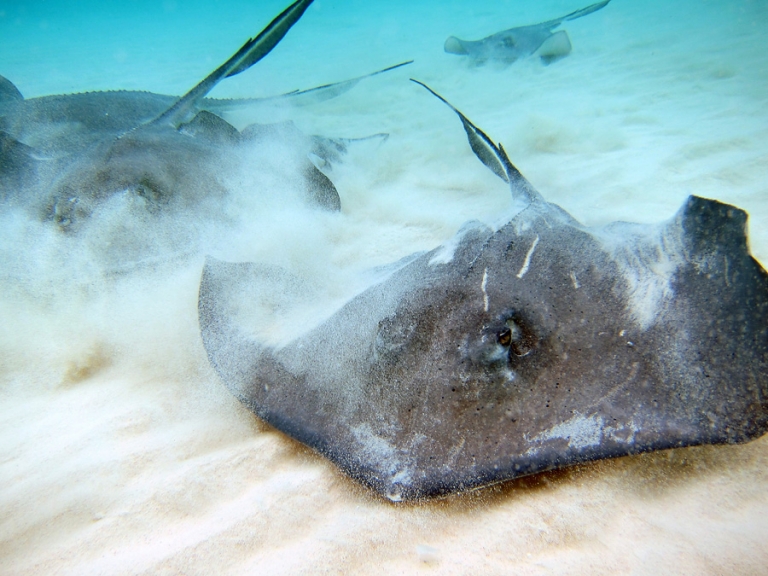 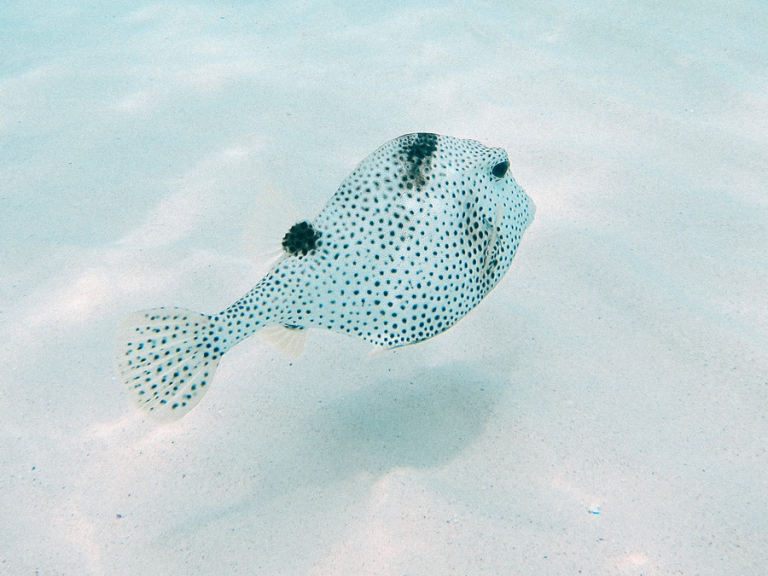 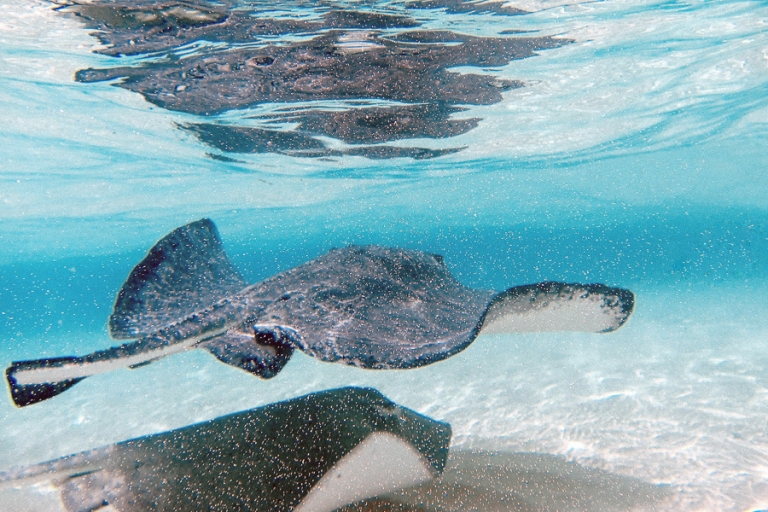 When our tour group got to the Coral Gardens site, I ignored my fears once again and just jumped in – I’ve never seen such a beautiful landscape underwater! The colorful corals and fish had me completely hooked, but we only stayed in that spot for about fifteen minutes. I wasn’t ready to leave and I ended up being the last one in the water.

We enjoyed the snorkeling so much that we decided to do one last adventure on Friday – we joined Tortuga Divers on a fantastic trip out to Sunset Reef where we snorkeled for well over an hour. I took more video than photos, but check out the trumpet fish below, and Chris’s stunning image of an angel fish! 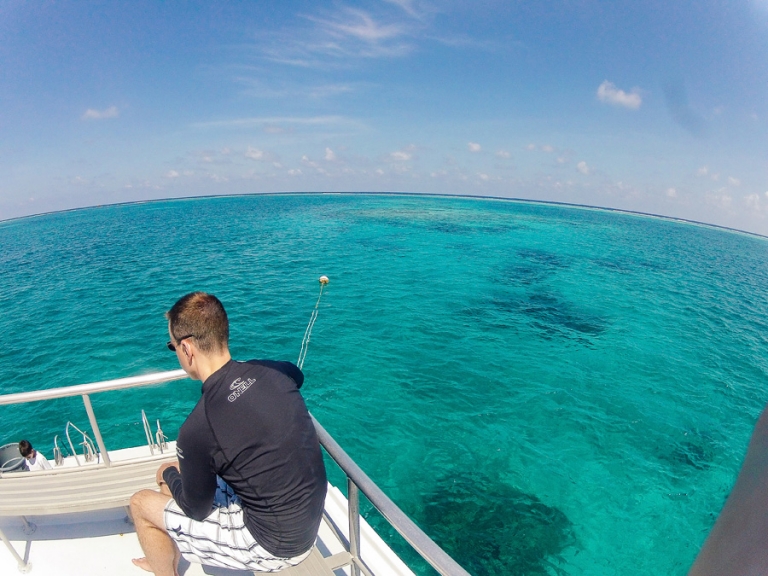 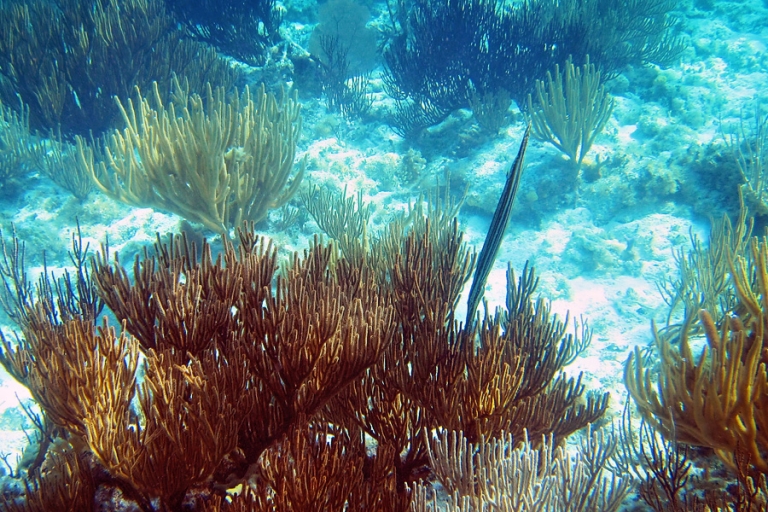 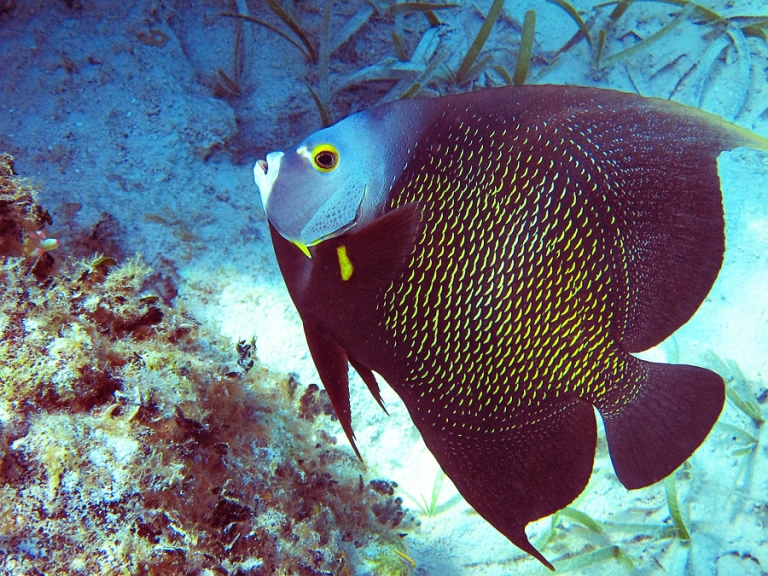 I took a ton of video on this trip, so I’ll work on putting together some of my favorite clips. Stay tuned! And finally, I’ll end with the traditional toes-on-vacation shot from the pool. I could have stared at that view all day long, and sometimes I did. 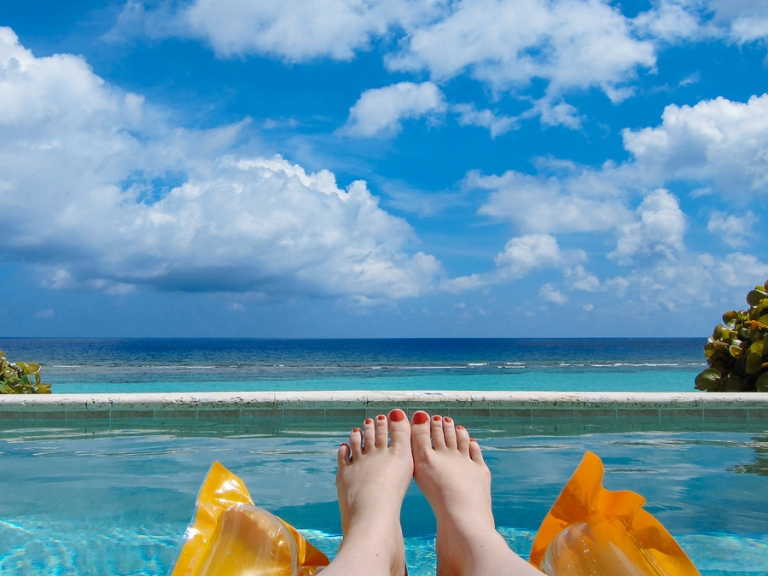 Update: I finished a little video of the trip and uploaded it here! Again, I’ll add a disclaimer that I’m not really a videographer (I barely understand frame rates and all that jazz), and I definitely need more practice shooting video and photos underwater. But you’ll get the idea, and Chris was able to grab some really cool scenes of the rays at Stingray City!