How to Drive the Ring Road in Iceland

Now that Chris and I have had some time to reflect on our trip, we have a few things we can share with anyone who is planning a similar trip to drive the Ring Road around Iceland. I hope these tips help!

First of all, let’s talk about the length of time it takes to drive the Ring Road, a stretch of highway that goes 828 miles around the island. Is it possible to do the Ring Road in a week (or even less) to see Iceland? Yes. It’s possible and I know that because we did it in five days! But I wouldn’t necessarily recommend it. If you’re dying to do this trip and you only have a week, it’s definitely feasible, but it also depends on what you want to see and do. There is so much to see in Iceland and there are several big attractions right along the Ring Road, but our most favorite experiences were off of the main road. Over five days (technically 4.5 days), we ended up driving the entire route in addition to several side trips, and we were constantly on the go. We got started by at least 9am every day, and most days we didn’t check into our hotel until 9pm so it did make for a long day. I sort of can’t believe how much we squeezed into our trip and we had a blast, but it wasn’t without a few aches and pains! We didn’t have much time to rest and relax on the road. We even had a full day in Reykjavik on both ends of the Ring Road trip, but that time was spent exploring the city and doing the Inside the Volcano tour. So if you don’t mind a bit of a hustle, yes it’s possible to do the Ring Road in a week. I would at least recommend spending a day in Reykjavik before you set out so you have some time to recover from any jet lag before trying to drive.

Also on the subject of scheduling, I would really recommend not over-scheduling activities/excursions unless they are must-do items for you OR if you have a longer trip with more flexibility. There were a few times where we felt like we couldn’t stop as much as we wanted to because we had to meet a tour group at a certain time (snowmobiling, horseback riding, and the volcano tour). Then again, we wanted to stop about every five minutes – there is so much to see! So the first day on the road we were actually a little relieved that our snowmobile trip was canceled due to bad weather because that allowed us to keep a more leisurely pace that afternoon. 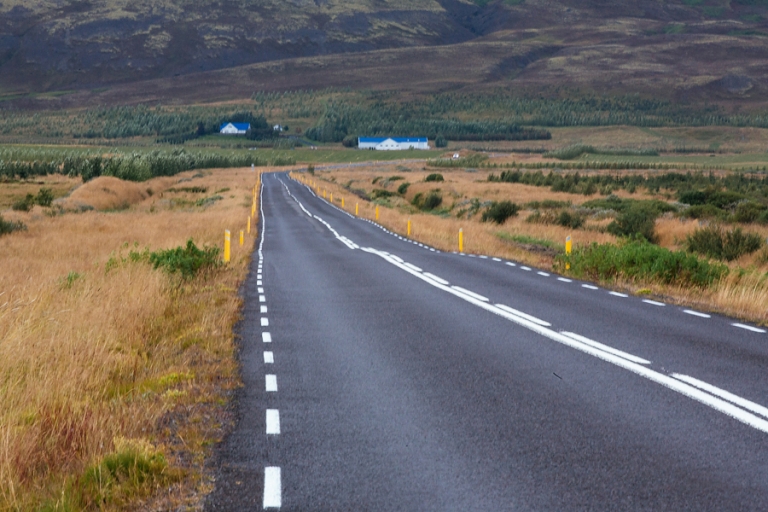 Because this was our first long road trip in another country with remote areas, I decided to book a self-drive tour with a company called Touris. Basically they booked all of our hotels, rental car, and a few excursions, and provided us with information about what to see along the route. Although I had already studied the Ring Road up and down and knew pretty much everything we wanted to see, I liked the idea of having 24-hour emergency support if something went wrong. I also thought it was reassuring that someone would know we were out there and expected us to arrive at our scheduled hotels each night. We didn’t run into any issues at all, but when we went through spots where my cell phone didn’t work (an AT&T international plan with good Iceland coverage) we had that extra comfort level that we weren’t going to break down and be stranded and no one would know where we were. In hindsight, we were often the only ones on the road as far as the eye could see, but we would eventually pass a car every now and then. It’s not like we went hours without seeing another human, so if we did have car trouble on the main road we would have had several chances to flag someone down. (On the more remote roads though, not so much.)

However, a huge extra major bonus of booking with Touris was that when our original departing flight was canceled late at night, Touris was hard at work re-booking all of our reservations for us while we got some sleep. When we woke up the next morning, everything had been rearranged and shifted by one day. If I was left to do all of that shuffling myself, it would have been a very very late night so that morning I was singing my praises for the team at Touris.

One of the things I failed to study before our road trip in Iceland was (duh) how to drive in Iceland. I just figured you drive on the right-hand side like we do at home in the States, so it should be easy peasy! It is, but here are a few handy things to know before you head out.

The route is fairly remote in many stretches. When you have a chance to fill up on gas, grab drinks & snacks, and use the restroom facilities, you should go ahead and do that. (I at least knew this before we left.) Oh, and a note on filling up at the gas stations – you can use a debit card or credit card at the pump, but for either card you need to know your PIN. 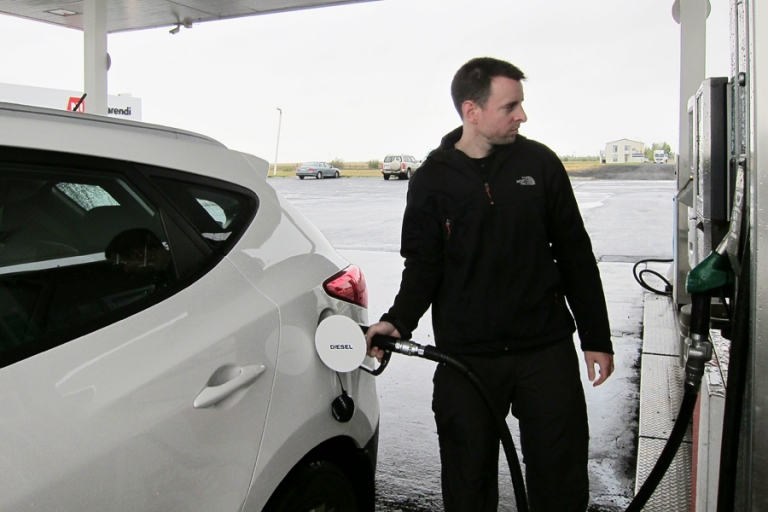 What I didn’t know was how many loose animals would be in the road. Our first near-miss with a sheep in the road was on the second night when it was getting a little dark. Keep an eye out – they are everywhere! There are signs for sheep and reindeer crossings, but they can be anywhere. That’s something we aren’t quite used to at home. 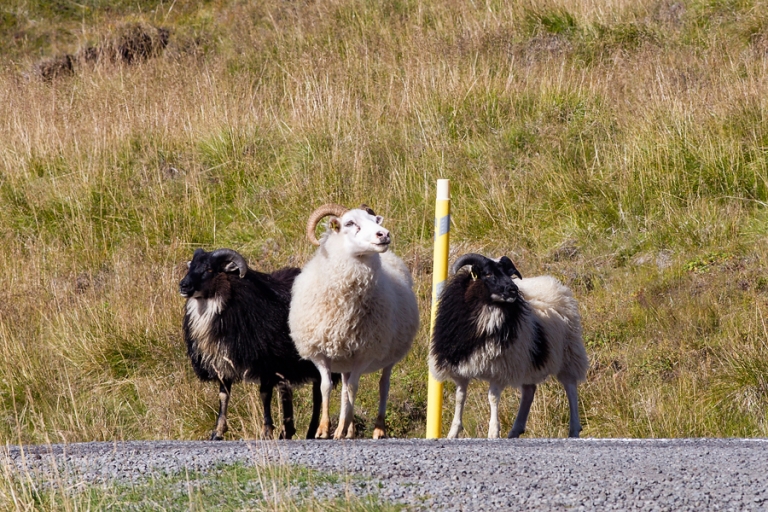 Be prepared for single-lane bridges where the car closest to the bridge has the right of way. Some of the longer bridges have spaces on the side to pull over, but the shorter ones do not. Slow down, and pay attention to who is approaching on the other side.

Keep your eyes peeled for signs indicating unpaved roads. In a few spots along the highway the road surface suddenly changes from asphalt to gravel, and if you don’t slow down you’ll risk popping a tire or dinging up your rental car’s paint job. (We took out the additional gravel insurance on the car just in case.) Our rental also had some reminders and tips for us as seen in these giant can’t-miss-them stickers on the dashboard! We didn’t have the opportunity to ford any rivers in the car and we didn’t encounter any sandstorms, but we did drive on gravel roads pretty frequently. 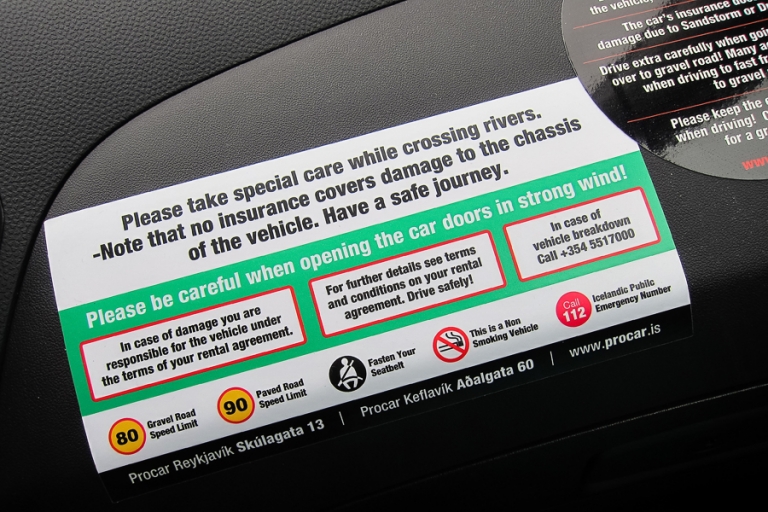 Chris and I received a Garmin GPS from the car rental company as part of our package, and it was loaded with Iceland maps and an Icelandic keyboard. We used it to navigate off the main road a few times, but it wasn’t always 100% reliable. Sometimes coordinates worked best, other times we needed to use the attraction/town name instead. I also had to Google step-by-step directions on my iPhone for a few places. And many times we just relied on a good old-fashioned paper road map for reference. I would recommend having a couple of options for navigation because often times there won’t be anyone to ask if you needed to stop for directions. I went old-school and used the paper map quite a bit!

Things are also more spread out than they appear on a map, and sometimes it takes longer to get to a spot than you think. I had everything plotted out on Google Maps with estimated times to get there, but where Google said it would take 25 minutes to drive from Rt. 1 to Dettifoss, for example, it actually took twice that long because the road was unpaved and incredibly potholed. We were in an SUV, but smaller cars had to take it even slower, so you have to take that into account.

We stayed in Reykjavik the first night, and then our subsequent overnight stays were in Hella, Höfn, Húsavík, Borgarnes, and another night in Reykjavik. All of the stops were fairly convenient, but the distance between Höfn and Húsavík meant that we had about five hours of driving to get to the north, and there was a lot to see in the Mývatn area so we felt a bit rushed that evening. In contrast, the distance from Borgarnes to Reykjavik was very short, so it almost felt like we didn’t need to stop there although I’m glad we did since that’s where we saw the Northern Lights. If I could do it all over, I’d add an additional day in the south and an additional day in the north. Of course if time was no object, I’d also take a couple of days on the Snæfellsnes peninsula in the west before returning to Reykjavik. I’ll write a little about our hotels in a separate post, but just wanted to mention the logistics of where we stopped each night.

So those are my tips! Let me know if you’ve been to Iceland and if you have any additional tips to add. Or if you’re planning a trip and have any questions, feel free to ask away. I’d be happy to try to assist, and I’ll also be really excited for you!

« Only in Iceland: Inside the Volcano Tour and the Blue LagoonPhoto Friday – Husband at the Harpa »