Only in Iceland: Inside the Volcano Tour and the Blue Lagoon

Our fifth and final day on the road! And on that last road trip day we experienced perhaps the biggest highlight of our Iceland trip – the Inside the Volcano tour where we hiked out to Thrihnukagigur volcano and descended 120 meters down inside. Fun facts: Þríhnúkagígur, meaning “three peaks crater,” has been dormant for 4000 years, and it is the only volcano in the world where you can go inside the magma chamber. The opportunity to see the inside of a volcano is fairly new; this is only their third summer running the tours. More people have climbed Mt. Everest than have been inside a volcano, so it’s a very special experience! And for anyone who wants to try saying it, the pronunciation is sort of close to, “three-nuke-a-GHEE-gur” (ghee like the butter, not gee like ohemgee).

The moderate-level hike out to the volcano is about 2 miles/3 km (so 4 miles/6 km round-trip) over lava fields, but there is a path of loose rocks most of the time to mark the way. Sometimes the terrain was uneven and tricky for those of us who are more clumsy, but it’s not particularly strenuous. It might be slightly tiring though if, for example, you’re already sore from horseback riding the day before, and lacking energy from staying up waaay too late photographing the Northern Lights. There is a helicopter ride option as well if you’re not up for the hike and/or if you want what I imagine are spectacular views. I liked being on the ground for this though – Chris and I had fun exploring the cavernous lava tubes along the way that really showed us the extent of the volcano system. Not to mention we easily burned off the calories of the previous night’s meal and the chocolate bar that followed it. 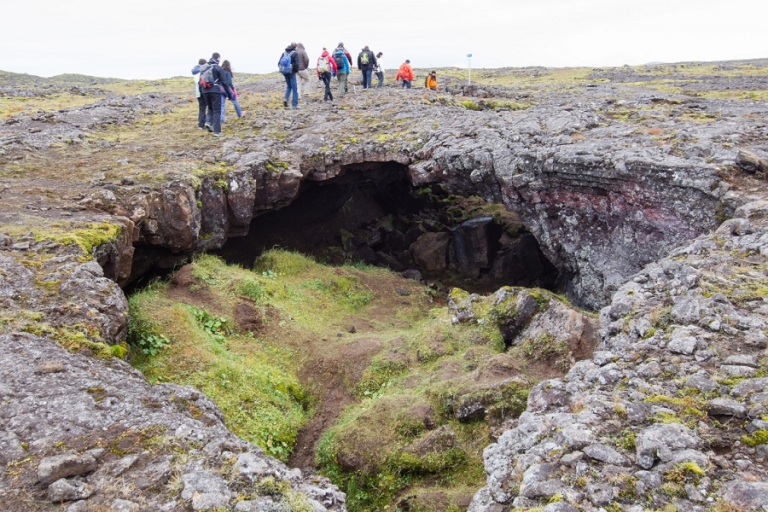 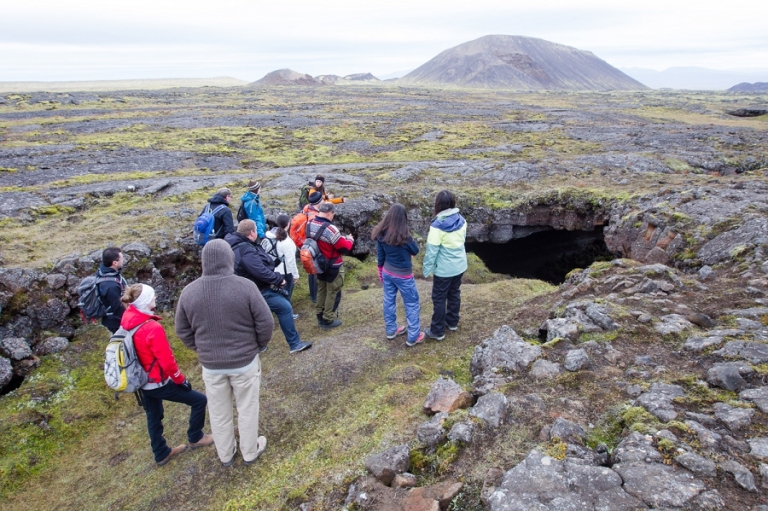 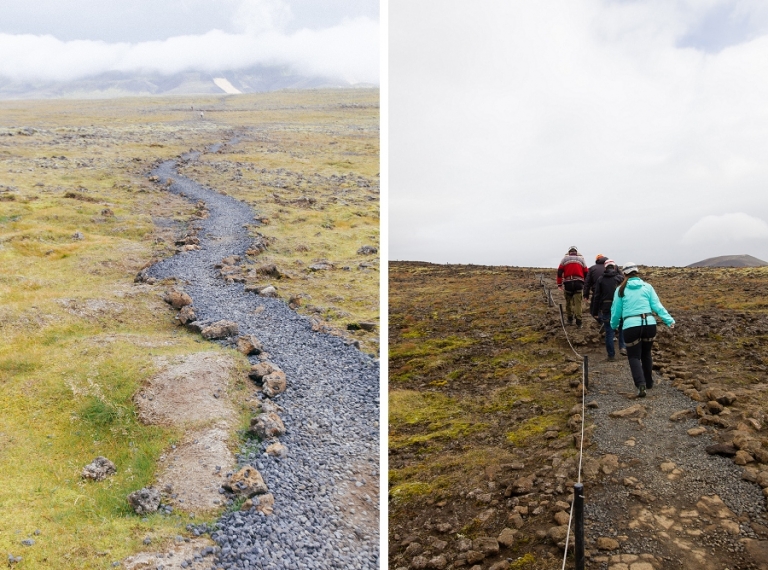 That’s Thrihnukagigur in the background. (I’m squinty because of the bright white sky.) 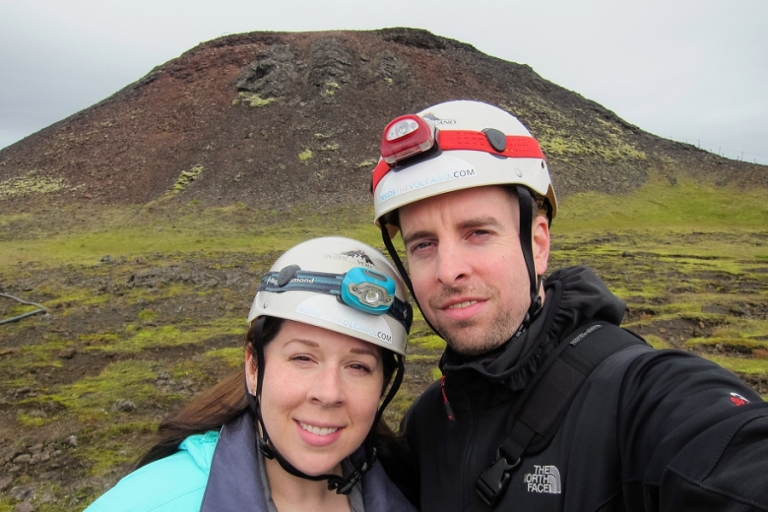 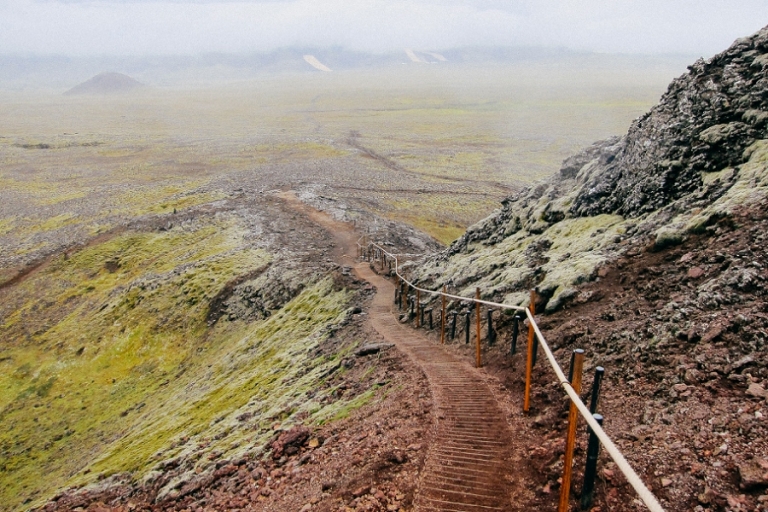 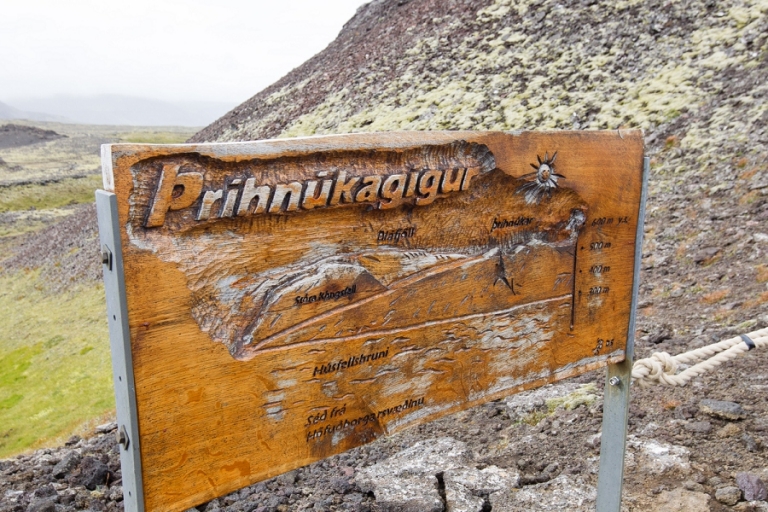 Built by German engineers, an intricate lift system lowers visitors down into the chamber and more importantly, brings them back up. The tour operators hooked us into the walkway and lift system via carabiner and harness for extra safety which I appreciated since we essentially walked a plank across a hole that plummets over 400 feet below. When Árni B. Stefánsson originally discovered the volcano, he simply rappelled into the crater hole without knowing that it was a volcano or what was below! 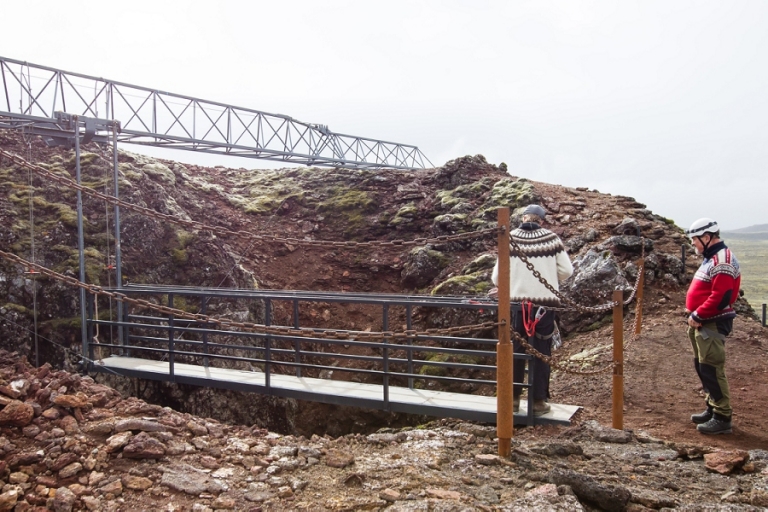 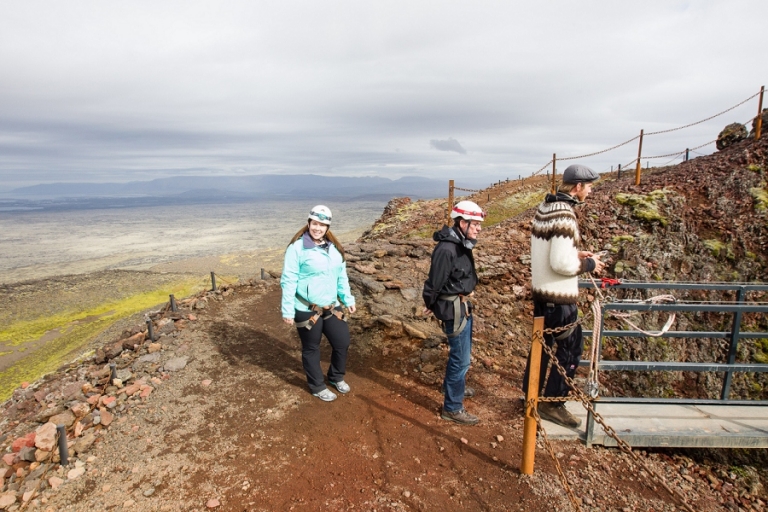 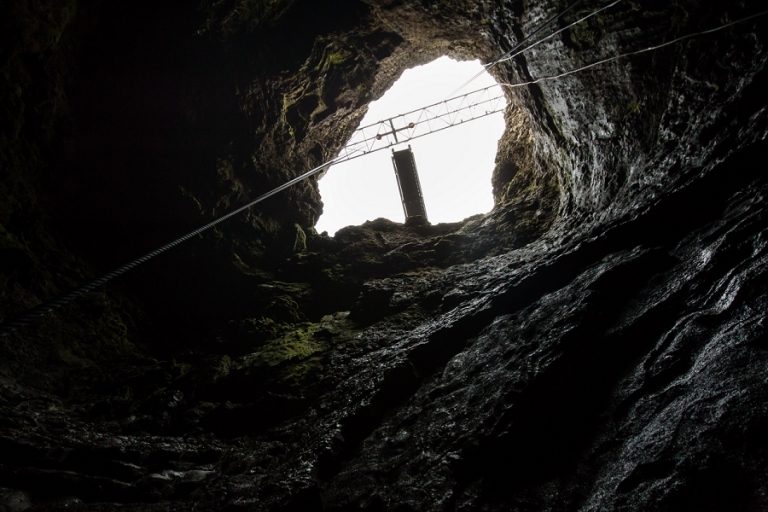 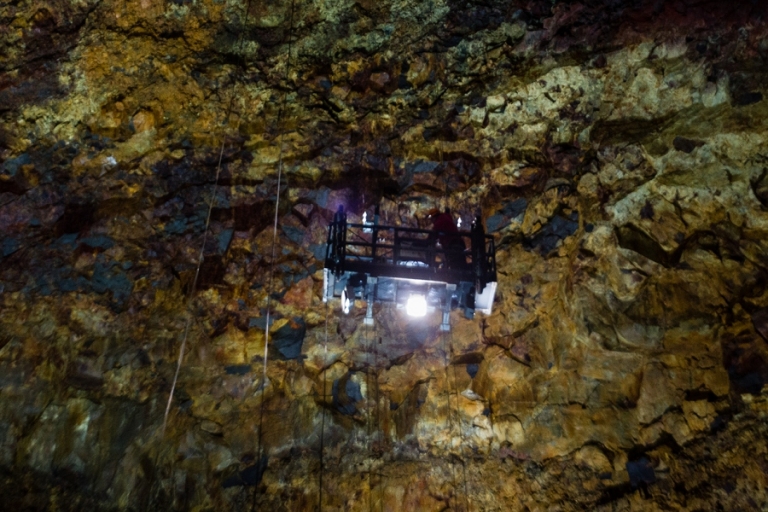 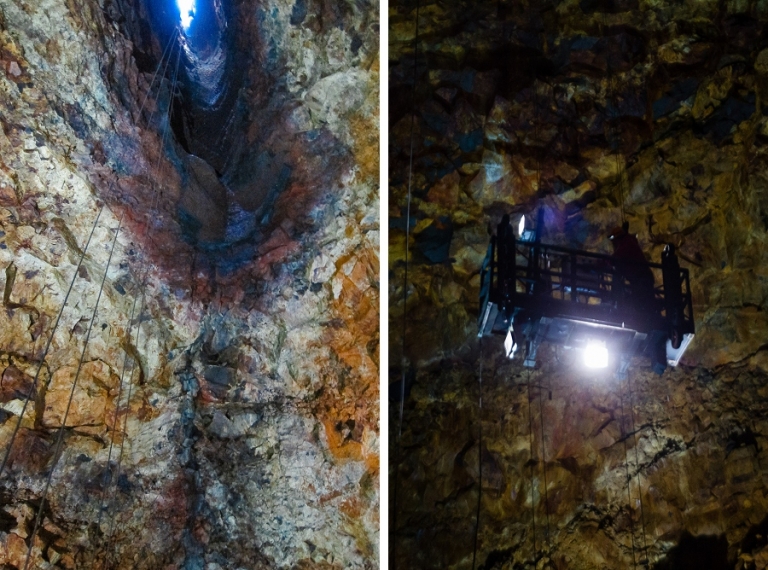 Once inside, our guide gave us some additional history and info about the volcano and we were set free to explore. Note that while lights have been added for easier touring and an orange rope marks off the no-access areas, no other amenities have been added to the interior. The paths remain completely natural with loose rocks and there are no stairs. Walking around was tricky, but it felt like a true adventure that way. To add to the adventurous spirit, when I signed up for the tour I didn’t realize that the dormant Thrihnukagigur still has the potential (though very unlikely) to erupt. What an interesting scenario to imagine while we were in the magma chamber! Upon hearing of our upcoming tour, a local in Akureryi told us the day before that if we “start to get hot, go up.” That was good advice and it made us chuckle, but it was a cool 6°C (43°F) inside and also a bit wet and drippy. The colors of the chamber walls, quite simply put, were stunning. And the walls were expansive! It was hard to capture the enormity of the space on camera, but to give you a comparison, the Statue of Liberty would fit comfortably inside the magma chamber with plenty of room to spare. 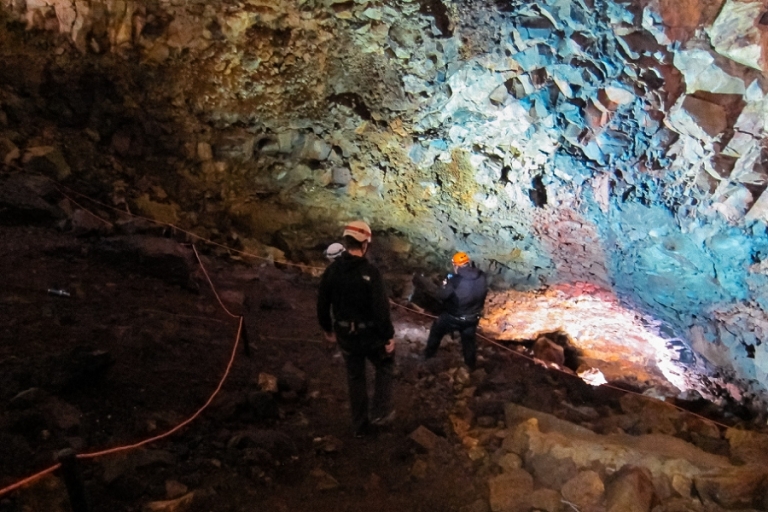 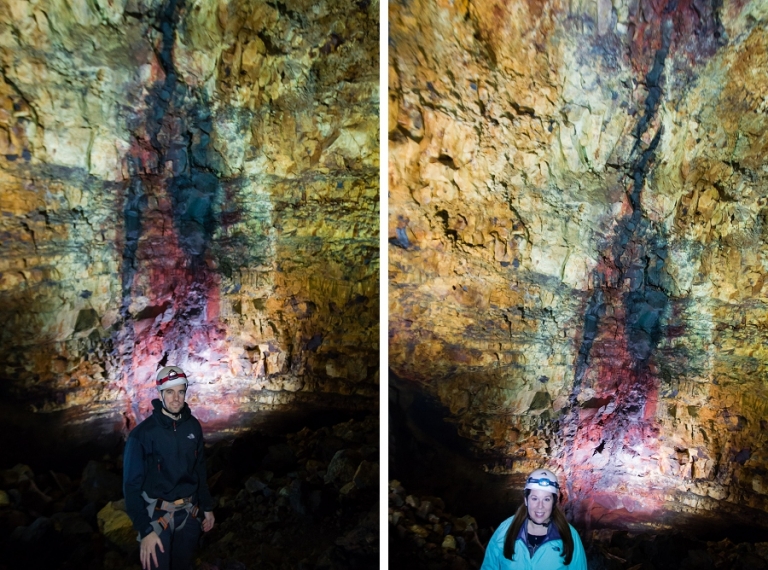 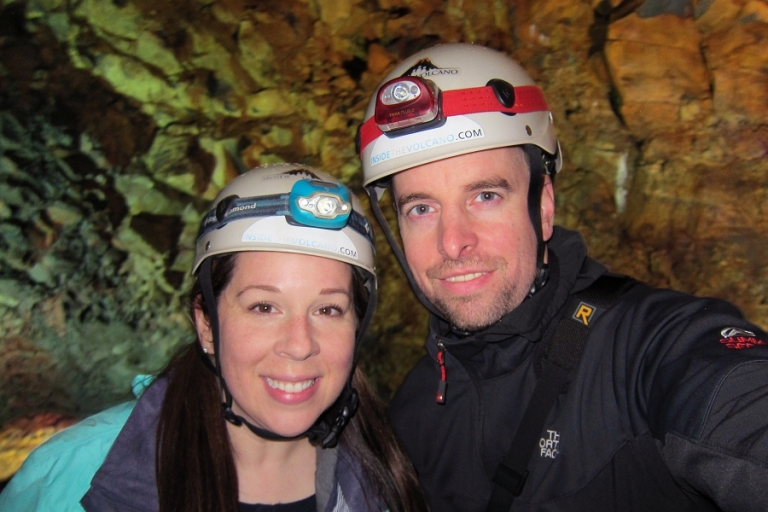 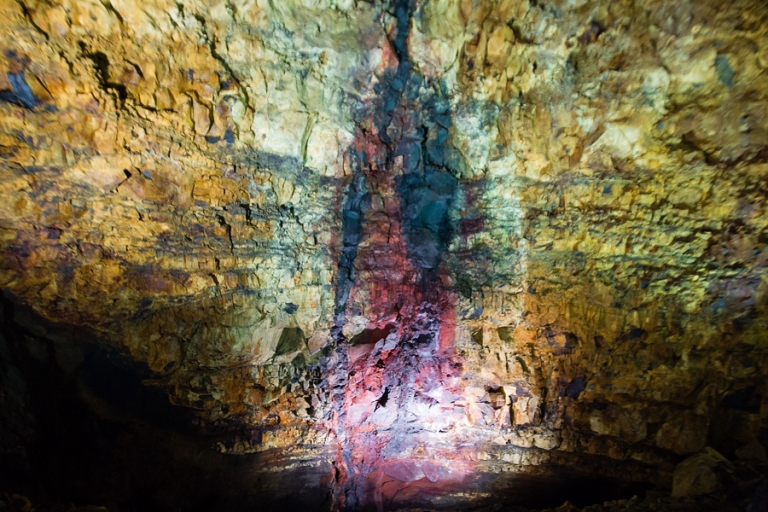 After the 4-mile hike on top of already-sore muscles from horseback riding, we were ready for some chillin’ out, maxin’ and relaxing in the Blue Lagoon so we headed out to the Grindavík area to get our geothermal spa on. Side note: the Blue Lagoon is about a 40-minute drive from Reykjavik. Grindavík is actually closer to Keflavik airport than it is to Reykjavik, so most people seem to work the spa trip into their itinerary on arrival or departure day. Bus transfers to and from the airport make it easy to do just that. If you’re navigating on your own, the Icelandic spelling and the listing in Garmin GPS is Bláa Lónið and they provide GPS coordinates on their website. The signage on the way there is good though.

Through the cold mist and gray clouds, we were happy to see the milky blue lagoon and steam rising in the distance indicating the warmth of the water. Oh, how I wanted to truly feel warm after our chilly morning! 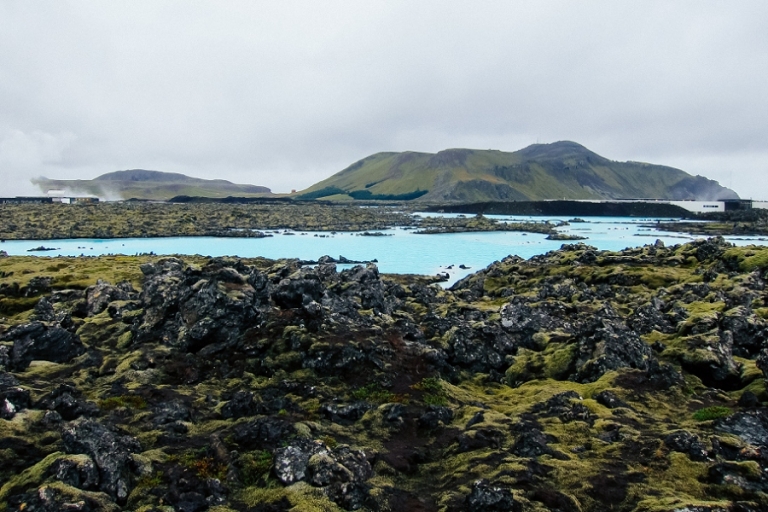 Upon arrival, the hectic vibe of the locker room left something to be desired, but I think that was due to our timing. We arrived at about 5pm on a Friday evening when there were so…many…people…and the locker room felt pretty packed. I did read that opening hour is the best time to avoid crowds and while that was our original plan, things got shifted when our first flight was canceled. Oh, and if you’re shy or modest, it’s probably best to visit during non-peak hours if possible – you are required to shower in your birthday suit in open shower stalls. After you have washed up with a focus on the parts they deem most important as indicated by signs (!), you can put your bathing suit on and head to the lagoon.

Once we figured out the locker/bracelet system (all purchases and your locker are connected to a bracelet that you wear in the water) and exited the building out to the lagoon, we were able to enjoy the setting. Despite the amount of people at the spa that day, the lagoon itself is so expansive that people aren’t sitting on top of each other. I was also worried that the water wouldn’t be warm enough, but it is, and there are different sections that are warmer than others. We had fun wading around finding good hot spots. Did you know the Blue Lagoon isn’t a natural hot spring? The surrounding land is natural, but the mineral rich water is a result of geothermal run-off from the nearby plant. People just started bathing in it, discovered that the water has healing properties, and a spa was born. I’m not so sure I would’ve been amongst the first people who said, “Hey look! Milky blue geothermal run-off water from the plant…I’m going to get in that,” but I did end up paying 40 Euro to get in now that plenty of other people have tested it out. 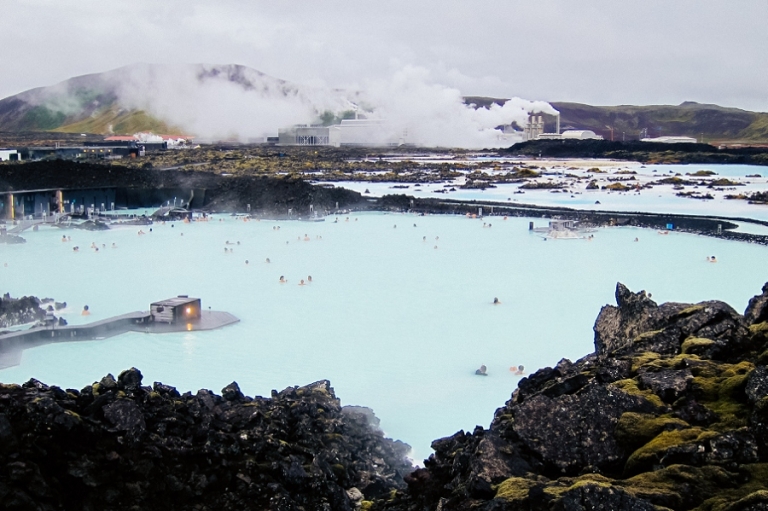 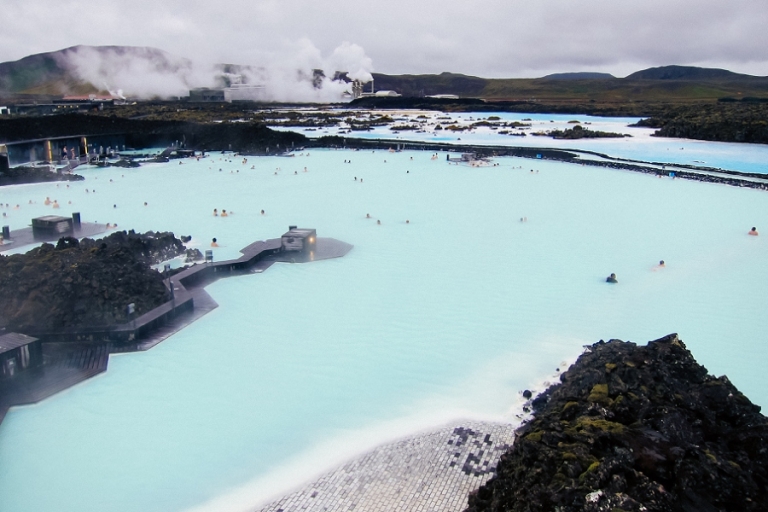 Chris took advantage of the in-lagoon bar and I thoroughly enjoyed access to containers of silica mud stationed around the pool. I followed the advice from other bloggers about keeping my hair healthy by combing lots of conditioner through my hair and leaving it in while we soaked in the lagoon (each shower stall provides dispensers of shampoo/body wash and conditioner). I put my hair up in a slick knot and didn’t have any of the issues that can be a result of minerals drying out your locks. I didn’t put my head underwater though, so that might also be part of the equation. As for the effect on my skin, I can report that the silica mask did seem to make my face feel very soft and smooth, though not ten years younger as I had hoped. Maybe we needed to stay longer.

One more thing of note based on our visit – I knew ahead of time that towels weren’t provided so we just planned on renting towels for convenience (though the fee was fairly steep at about $13 for two of us), but someone actually swiped our towels while we were in the water! Our towels were hanging in a designated spot outside as assigned by our locker number, but there really isn’t any method of preventing people from taking each other’s stuff. Thankfully the lagoon provided us a second set of towels at no charge and no one walked off with our flip-flops. For that reason I’m glad we didn’t bring towels from the hotel or our own travel towels – we would have never seen them again. Crowds and logistics aside, this is still a must-do in Iceland and I’m so glad we experienced it. 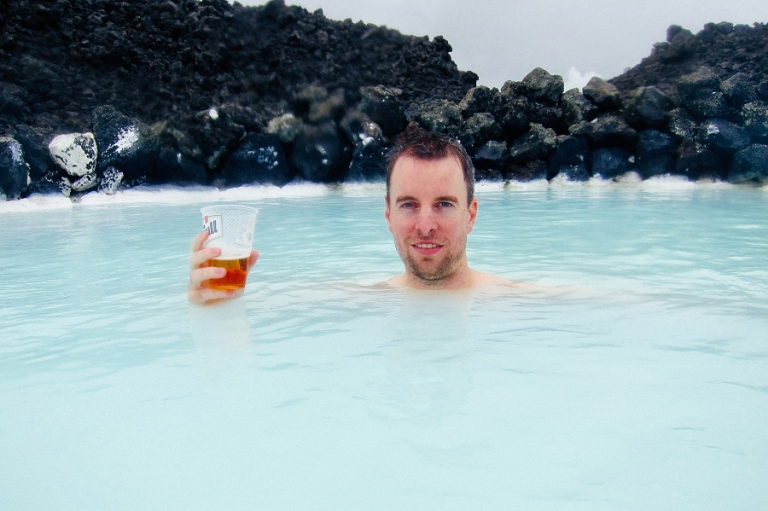 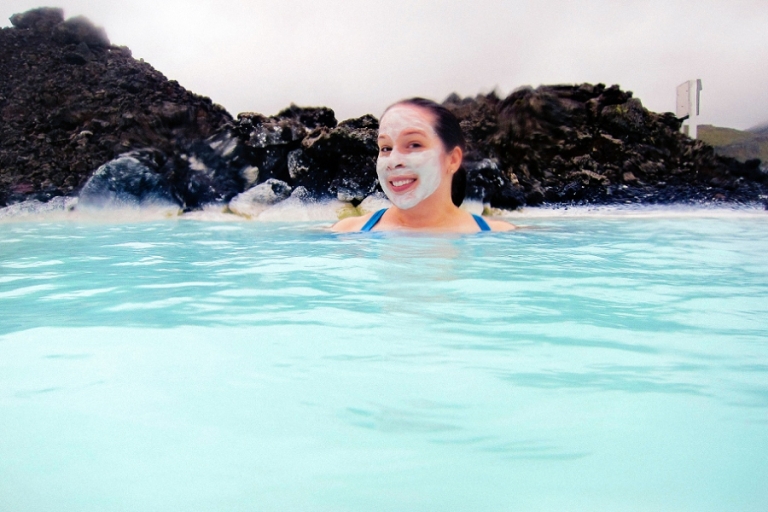 Whether it’s because I was exhausted from the past few days’ activities or because I was truly relaxed from the lagoon, I slept so great that night. The next day, Chris and I took a Flybus shuttle to the airport just after lunch, and we headed back home. I’m not quite done talking about Iceland though! I have a few more posts coming up including my new tradition of doing a “snapshot” post where I round up the superlative bits of the trip (best meal, funniest moment, favorite hotel, etc.), and I’ll also write some posts with tips to help anyone who is planning a similar trip. So if you haven’t gotten your fill of Iceland from me yet, stay tuned!

Oh! And I also put together this little video from the point-and-shoot clips we took throughout our whole trip. I’ve confessed to you before that I don’t consider videography to be in my wheelhouse at all, but Chris and I enjoy looking back on our trips in video form (even if they’re amateurish in production value) and I might as well share it here, right? Voilà:

Iceland 2014 from Susan Marks on Vimeo.