When we arrived at our first port of call, Ketchikan, it was a drizzly day, but since we planned to be on the water most of the day kayaking with Southeast Sea Kayaks we figured a little rain wouldn’t bother us. We brought our waterproof jackets exactly for this occasion and for the unpredictable weather in Alaska. It turned out to be the only rainy day of the whole trip, but we were glad we packed them! 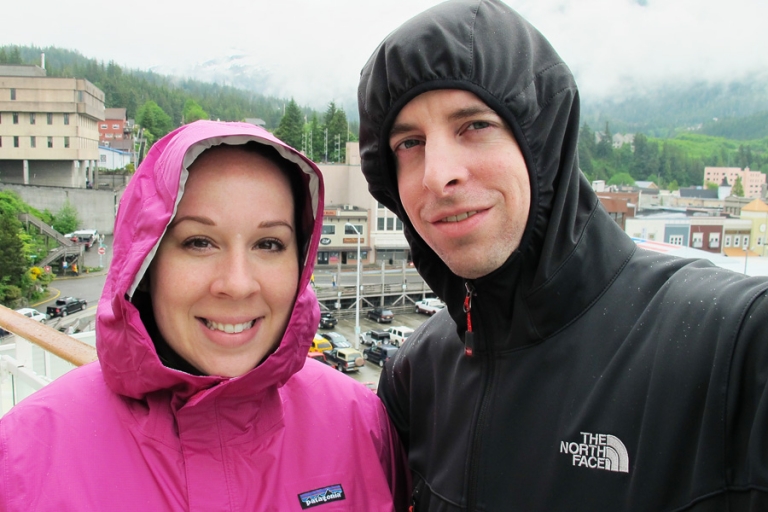 We met the Southeast Sea Kayaks van at the famous liquid sunshine gauge in town outside of the visitor center, about 10 minutes before our 9am tour start time for the Orcas Cove tour. 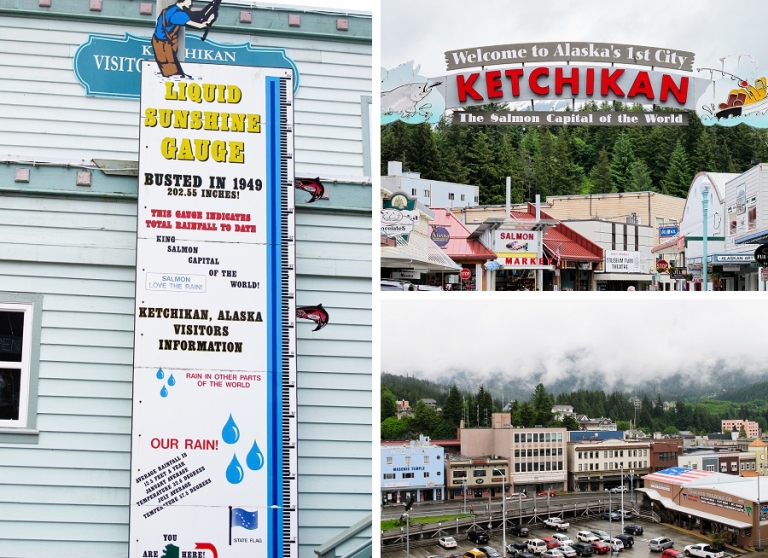 The van took us to the office where we were outfitted with spray jackets, rain pants and life jackets. We opted to wear the spray jacket for the extra protection – the wrists sealed better and tighter than our own jackets. Underneath, we were each wearing a light hoodie and a t-shirt. Chris wore hiking pants and I wore jeans, and both of us were comfortable the whole time for a June morning. We were also given a large dry bag for our camera, which worked great. The only other thing I wish I had brought was bug spray. I ended up with some really itchy bites on my hands and one above my eyebrow since my hands and face were the only skin exposed!

My head-to-toe blue outfit reminds me of a certain scene from Charlie and the Chocolate Factory. “Violet’s turning violet!” Points if you remember that moment. 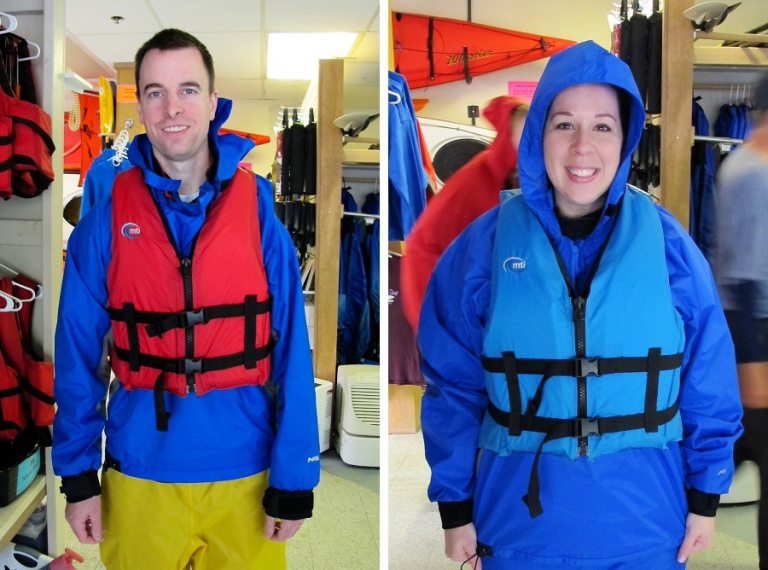 From the office, we boarded a boat for a scenic 20-minute ride to a larger boat moored at Orcas Cove. Once on board, we listened to instructions on sea kayaking and paddling. Of course at that point, I began to get nervous. When I peered over the side of the boat, I could see tons of medium-sized jellyfish bobbing about in the water (later I learned they are a non-stinging variety), and I thought for sure I was going to tip our kayak and end up going for a swim with the jellies. 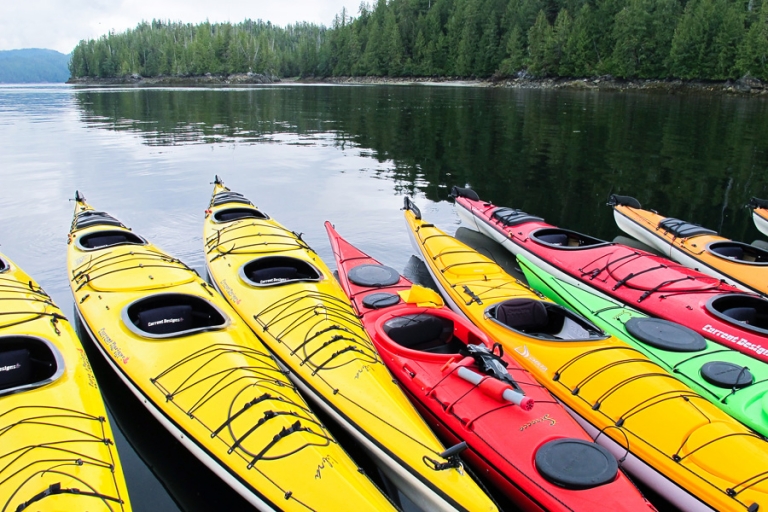 It wasn’t terribly difficult to get into the kayaks (our guides provided assistance), and I was relieved to be safely in the water in a sturdy tandem kayak with Chris. Our guide, Alex, took us around the cove to get used to the mechanics of paddling (for those of us who were new to kayaking), and then eventually he gave us free rein to explore the area. He also offered to take photos of us, which was such a nice gesture, especially for two photographers who don’t get to be in the photos very often. 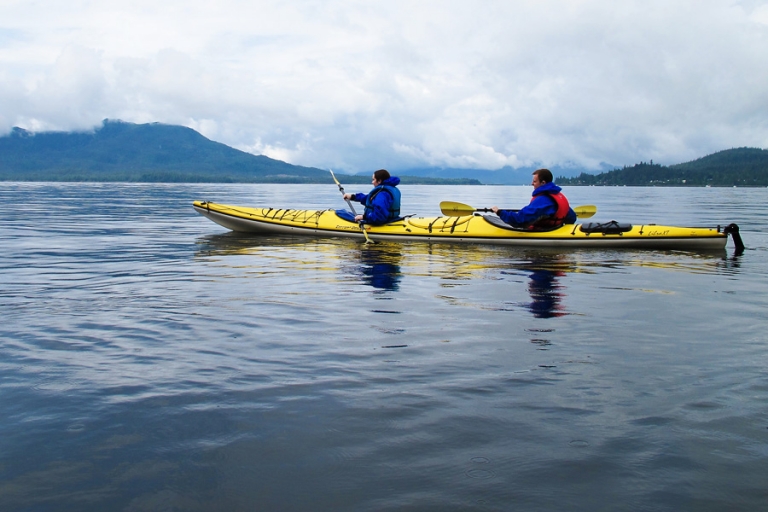 After a few minutes on the water, I relaxed and became comfortable with the kayak enough to take some photos. I didn’t pack the waterproof housing for this trip, but the wrist strap on my point-and-shoot provided enough security that I felt like I could use the camera without accidentally flinging it into the sea. And actually, I could have even brought the SLR for this trip – the dry bags were certainly large enough, and my camera’s neck strap would have been plenty secure for shooting on the water (unless we tipped over!). 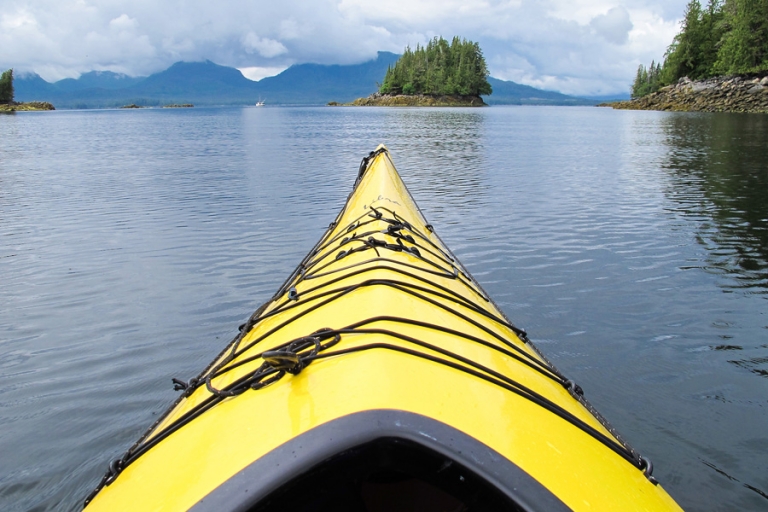 We enjoyed exploring for a couple of hours. I was even brave enough to paddle up to these sea stars for a closer look and a photo. Alex kept plucking random sea creatures out of the water (including one of the non-stinging jellyfish) and asking if I wanted to HOLD one. Um, no? Clearly he just met me.

We didn’t see any Orcas or Humpback Whales, but I was actually a little relieved not to – I imagined being capsized either by my own excitement over seeing them, or because one of them accidentally tipped me over. We did see a Bald Eagle though! It was really far away and of course my little point-and-shoot doesn’t quite do the job for telephoto images, but it was neat to see the eagle in the wild. 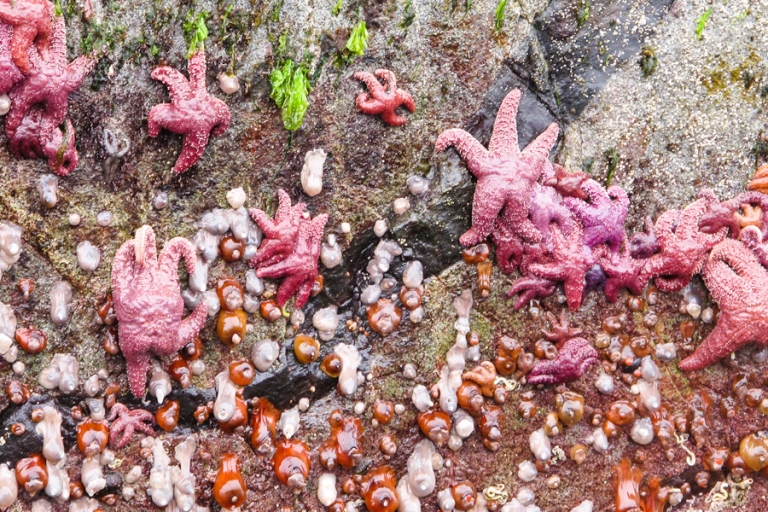 After we worked up an appetite kayaking, we were treated to a little snack picnic back on the boat where we sampled smoked salmon on crackers and cheese. It was nice to relax and chat with the guides and crew for a bit before returning to the dock. The whole tour from booking to return trip was awesome and wonderfully organized and I can highly recommend Southeast Sea Kayaks! I hope we get to explore on the water with them again someday.

Oh, and just a quick side-note – if you need a lunch idea for after the tour, try the little Alaskan Surf Fish & Chips stand in Ketchikan. It was one of our most favorite (and least expensive) meals of the whole trip! There is always a long line apparently, but it’s totally worth the wait. Our food was hot, fresh, and so yummy. We tried the fish & chips and the coconut shrimp and shared everything. I wish we could have eaten there more than once! Also, there’s a fantastic candy store just a short walk away called Ketchicandies where we happily stocked up on sweets like chocolate-covered Oreos and pretzels for the rest of the trip. 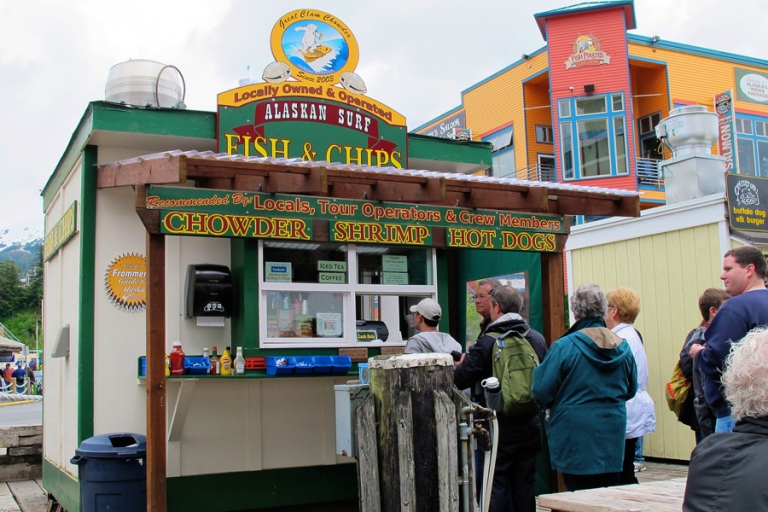