On April 27th of this year, Chris and I found ourselves celebrating King’s Day in Amsterdam completely by accident! Since my main goal for visiting The Netherlands was to photograph the tulips, I only took tulip season into consideration when booking the dates for our trip. I selected the week right in the middle of blooming season, which happened to overlap with Koningsdag 2016, a huge festival to celebrate King Willem Alexander’s birthday. Lang zal hij leven! (Long may he live!) 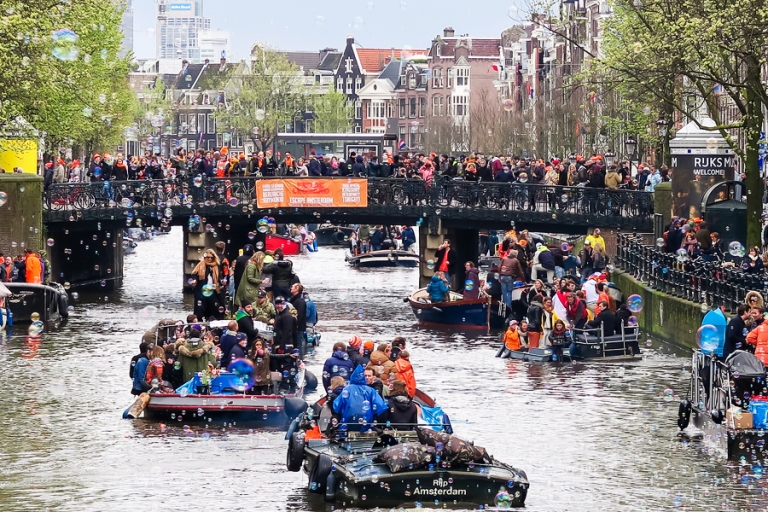 Up until three years ago, the Dutch celebrated the birthday of queen mother Beatrix, but she has since abdicated the throne. We didn’t know anything about a day for the queen or king until after I booked the flights and accommodations. And now that I think about it, if I had known about the nationwide all-day party that draws millions of people out into the streets at once, I might have scheduled different dates since I’m not usually a fan of huge crowds.

But with everything set in stone, I decided to go with the flow and I even packed a shirt in the official royal family color orange. We ended up having a really cold and sometimes quite rainy day, so my orange shirt ended up buried under several layers, but it’s in there. And I bought a $7 pair of orange sunglasses before we left even though I wasn’t sure I’d need them. We did get a bit of sun, so I briefly put them to good use. 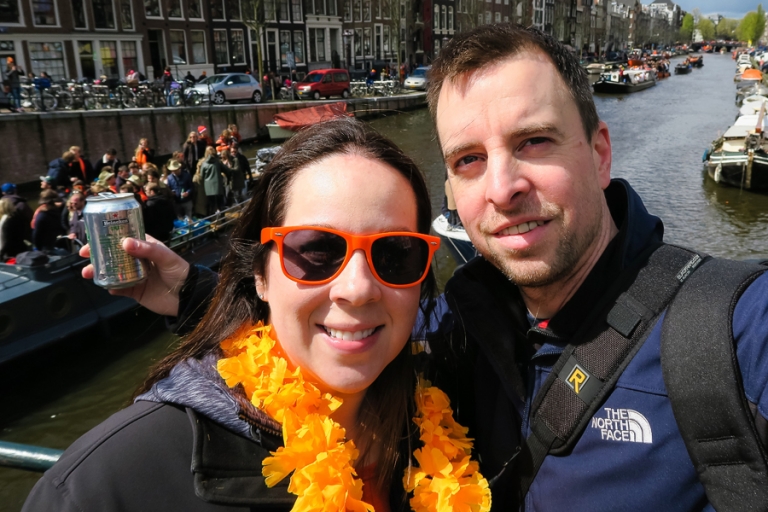 Locals and tourists alike donned orange outfits and accessories (and then covered them up with coats and scarves). The city gets dressed up, too, with orange accents. 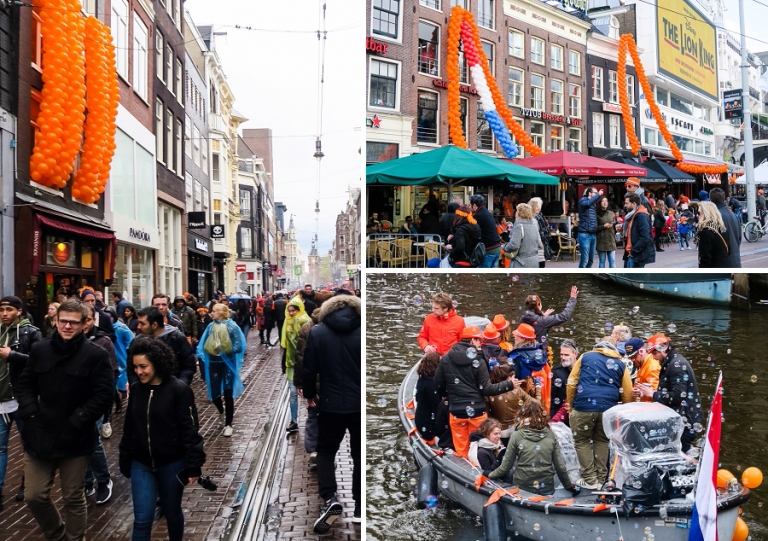 After I found out about King’s Day being in the middle of our trip, I looked into the best ways to spend our time celebrating. Thousands of merrymakers choose to spend most of the day on the canals in the party boats. That option sounded like a ton of fun, but we didn’t want to restrict so much of our first full day in the city to a specific schedule. We decided to simply enjoy wandering the streets to partake in the various food and drink stalls, the vrijmarkt (basically a city-wide flea market/swap), and watching the boats from the bridges. Being on foot also gave us the added bonus of being able to duck inside when it started to rain. 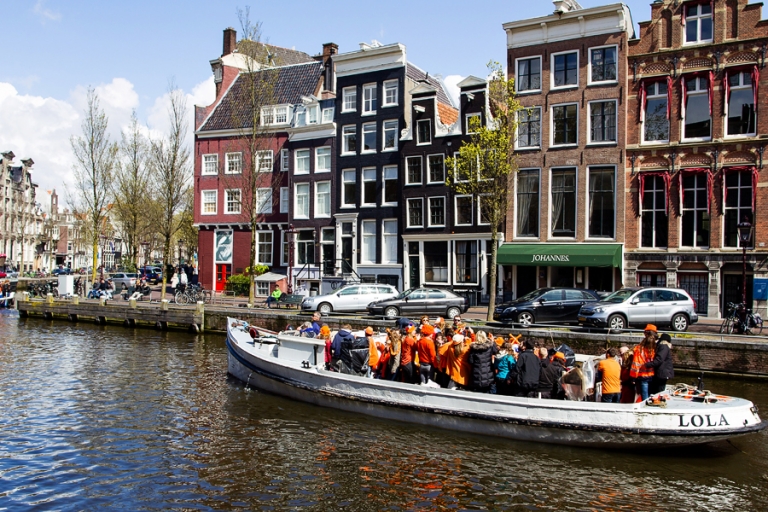 Despite the chilly and occasionally wet weather, we found ourselves in crowds so thick it was nearly impossible to navigate through the streets. We shimmied and danced our way around, combining sightseeing with the festivities. 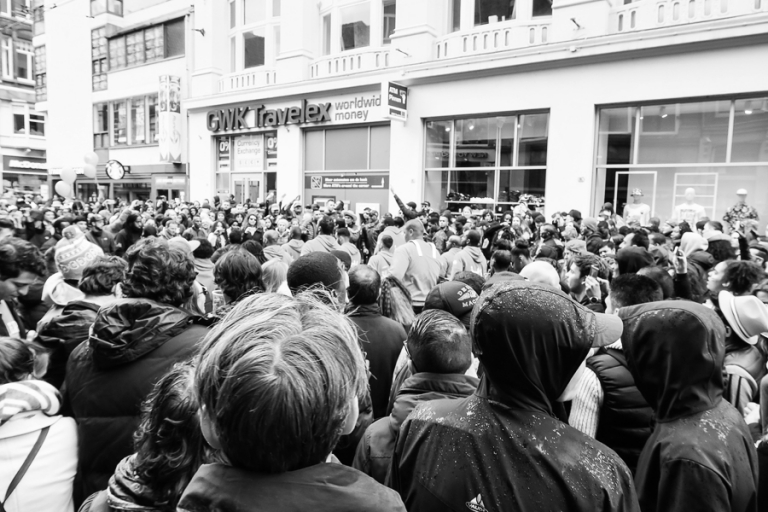 During one of the gray and rainy moments, we stopped by the Heineken Experience for a self-guided tour of the original Heineken brewery. Most things are closed on King’s Day, but several of the museums and major attractions do have open hours. (We also fit the Anne Frank House into King’s Day evening since that was the only date we were able to get tickets online.)

The Heineken Experience was the perfect way to spend some time staying dry and I got to try Heineken for the first time (gasp). Dare I say I actually enjoyed this tour more than our time at the Guinness Storehouse last year (gasp again!). I liked the layout, the interactive stations, and the multiple beer samples. While the view of Amsterdam perhaps wasn’t quite as spectacular as the Storehouse’s 360 view of Dublin, Heineken’s rooftop bar had plenty of room for seating, standing, and dancing. And plus they gave us hats! 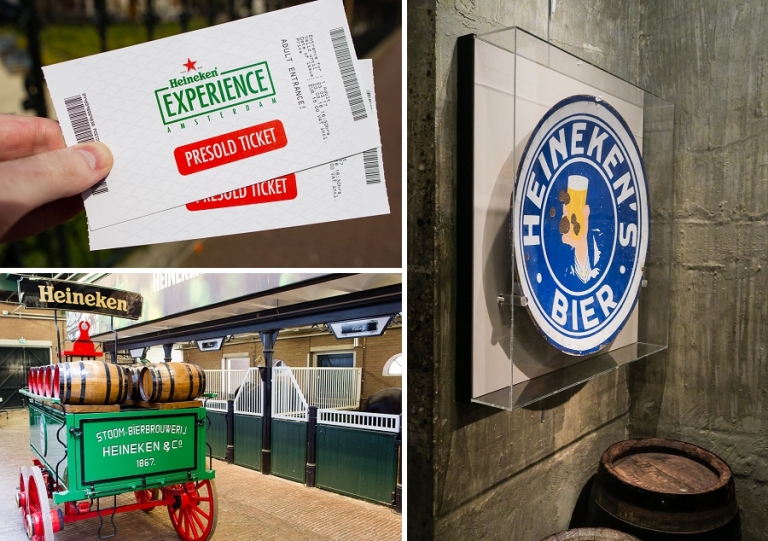 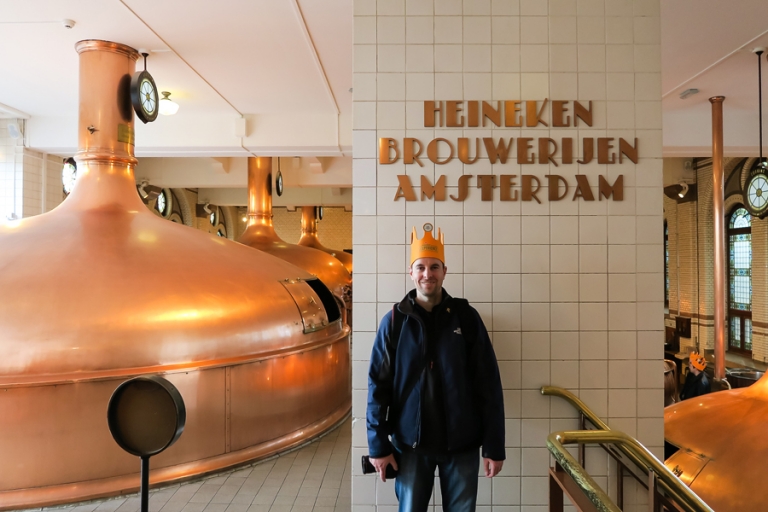 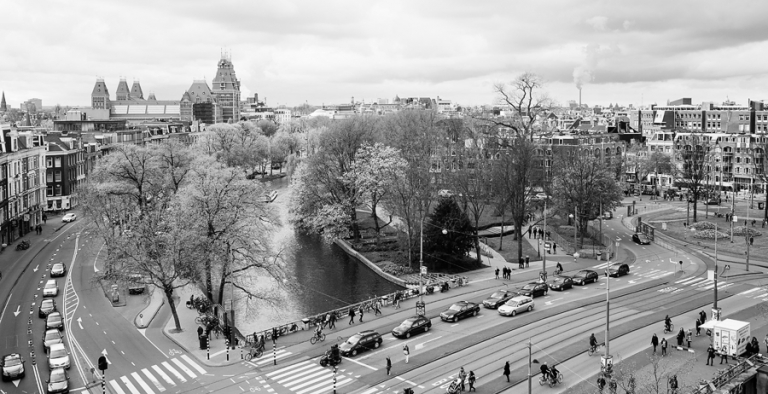 We heard from a few locals that this year’s Koningsdag was pretty tame compared to years in the past. The weather probably contributed a bit, and some new regulations restricted the party to certain areas, but I still felt the crazy energy and loved the people-watching opportunities. What’s more fun than walking around with beers and seeing a city on a day where everyone is in a great mood? 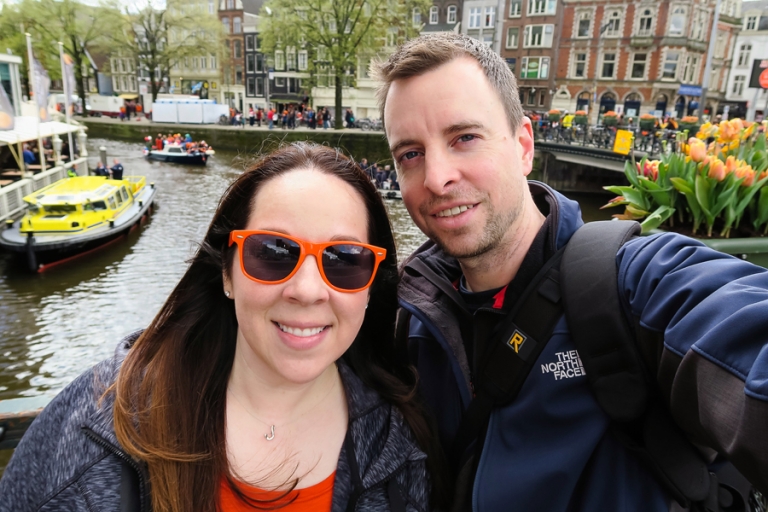 What I Packed for Ireland and Scotland in Late Summer
Bruges According to the Weather
A Little Do-Re-Me in Salzburg
Scotland 2018 Snapshot
Tags: breweries, Europe, The Netherlands

« I AmsterdamTiptoeing Through the Tulips in Holland »