Chris and I are playing a virtual game of Travel Snafu Bingo. We have marked off the squares for the ordinary travel misfortunes like lost luggage, food poisoning, and canceled flights, but we’ve also checked off tropical storms, hurricanes, a volcano eruption, a virus outbreak, a parasite that required cryosurgery, and a couple of other mishaps. After our trip to Peru, we get to cross off local protests/strikes! (Note to the Universe: I am in no way trying to jinx ourselves or ask for additional troubles to occur.)

And I’m certainly not complaining – we have been incredibly fortunate to weather the storms and setbacks safely and have avoided any true disasters during our adventures, knock on wood. We have also learned some valuable lessons and life skills along the way! (Always wear bug spray in Central America.)

When we arrived in Peru to the rumblings of a teachers’ strike in Cusco, we didn’t think it would really affect our travel all that much. But as details unfolded and as the strike grew in intensity, we learned that the impact to travel might be quite significant since large groups of protesters were blocking streets and train tracks in and out of the region. Sure enough, as we arrived by van outside of Ollantaytambo on Day Six, we were stopped in the road before we reached our destination in town. 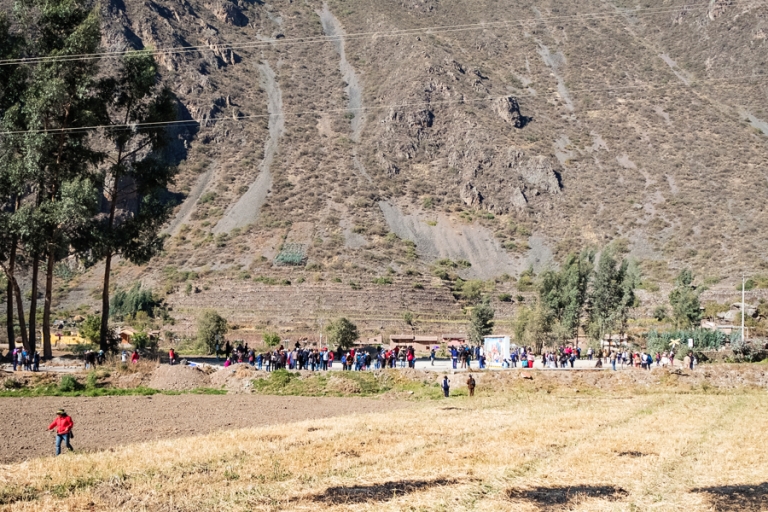 With beautiful weather on our side and our destination only a mile away, we were able to simply hop off the van and successfully carry all of our bags and belongings on our backs and hoof it up the hill into town. From there, we made our way over to the day’s archaeological site – the Sun Temple ruins of Ollantaytambo. 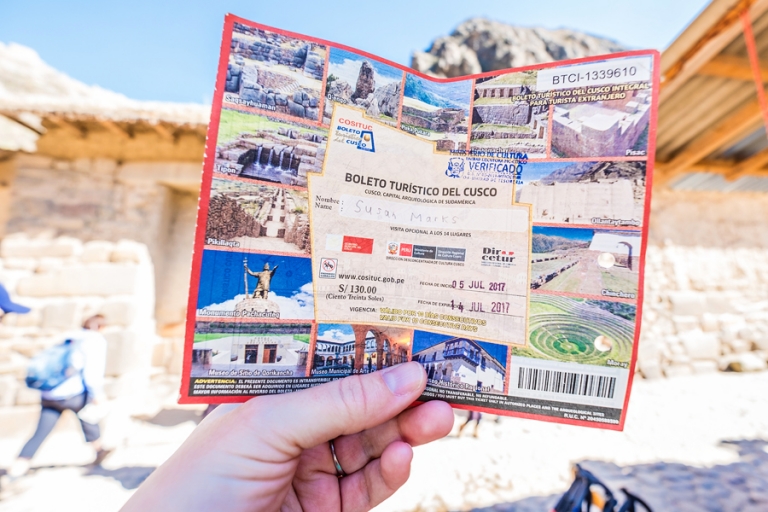 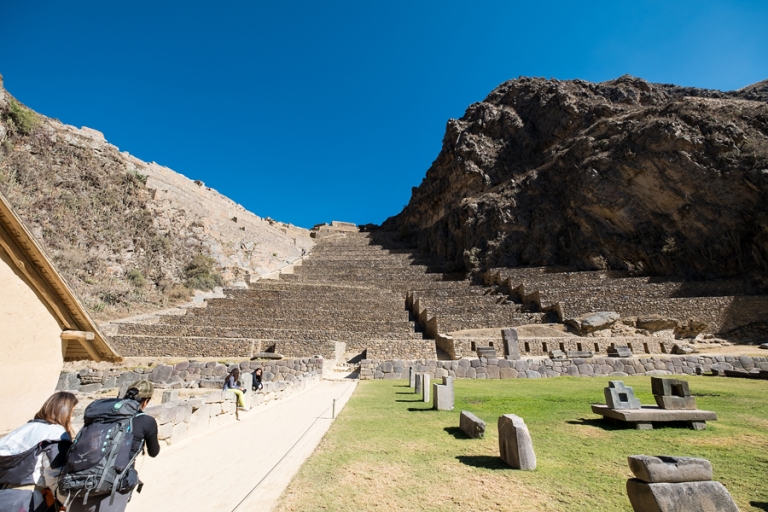 Apparently climbing that hill into town was just a warm-up for the steps of the Sun Temple. More evidence of how fit those Inca people must have been! 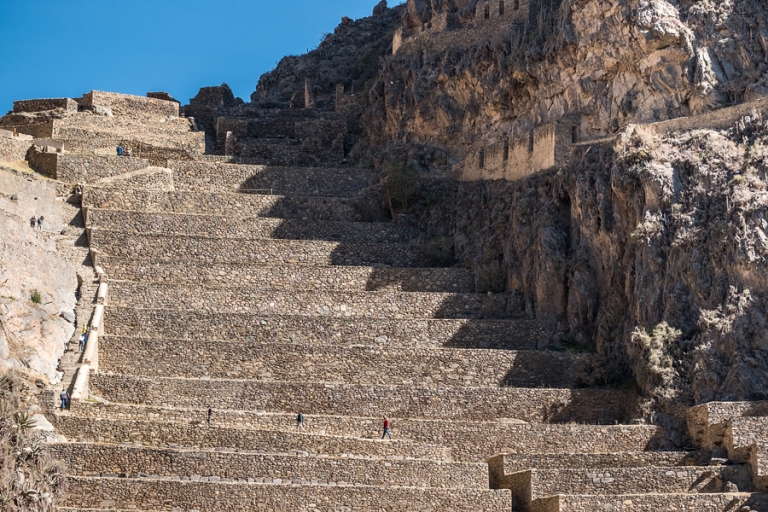 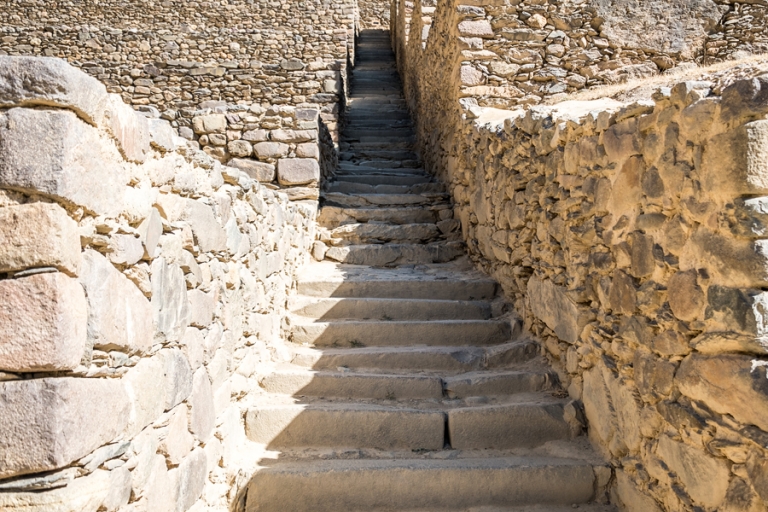 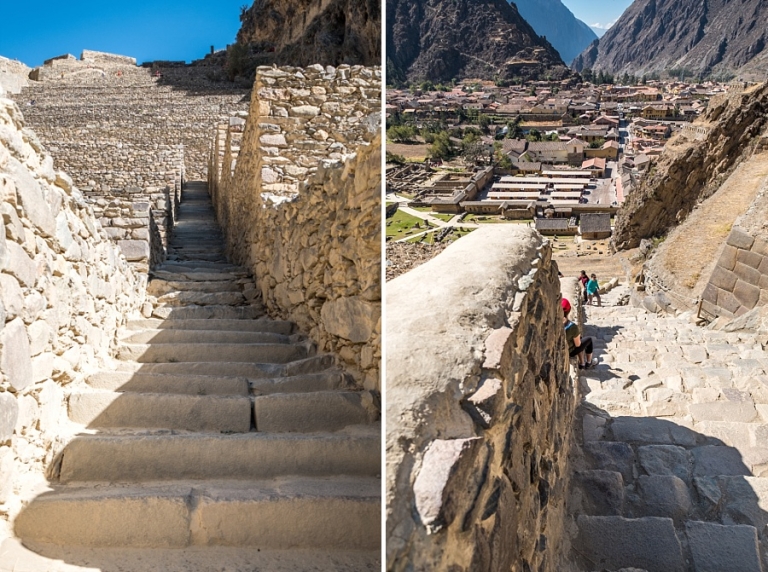 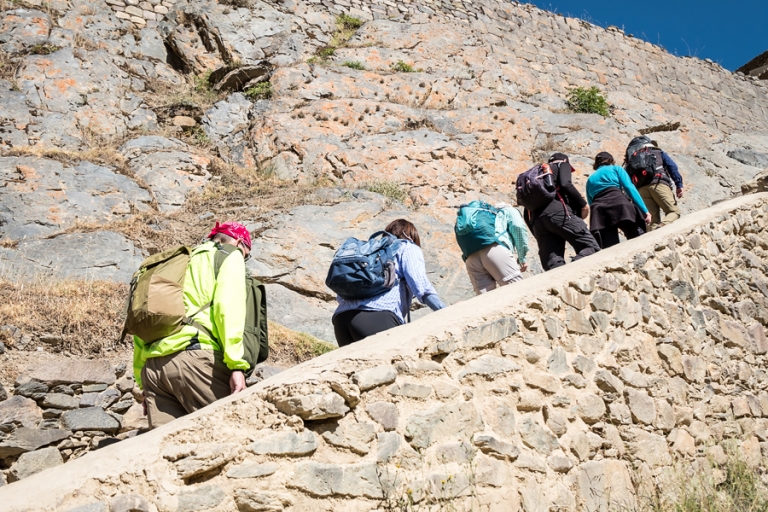 We explored the ruins and enjoyed views of the town from various points on top of the temple, which we learned was also used as a fortress to where Manco Inca retreated during the Spanish conquistador siege of Cusco. Stopping to take photos of the town also served as an excuse to catch my breath after several flights of stairs. Ollantaytambo sits around 9160 feet and wasn’t the highest part of our trek of course, but it’s still enough elevation to make one huff and puff a little after 200 or so steps. 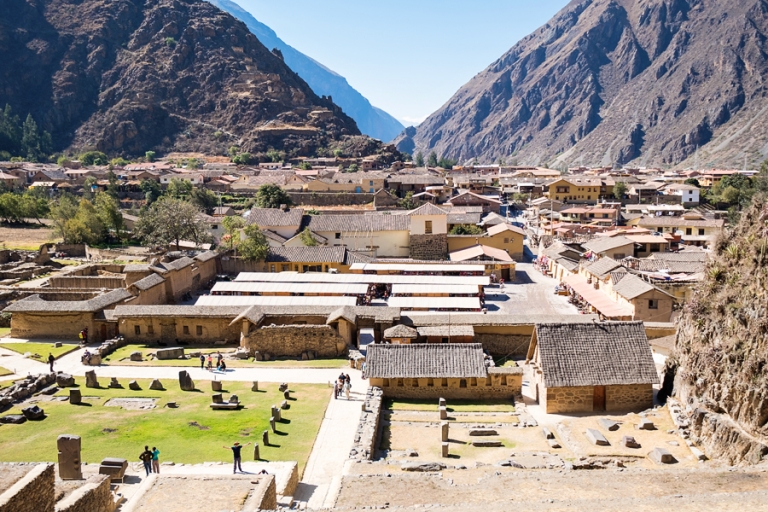 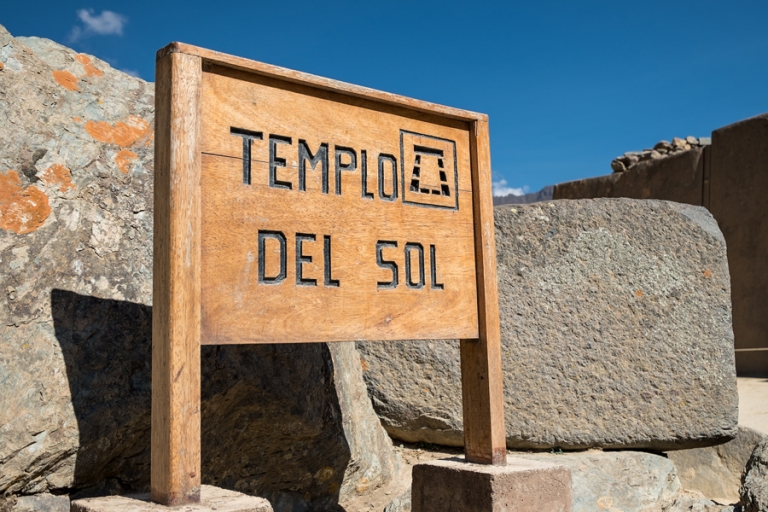 Chris is taller than the average Inca. 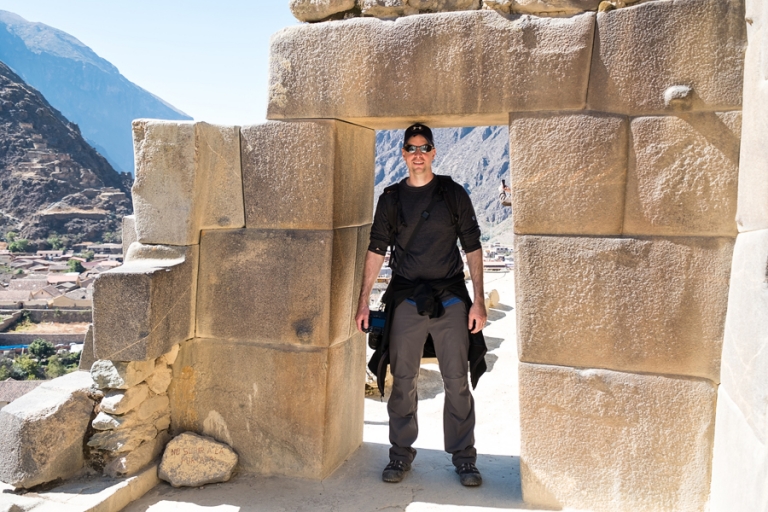 After touring the ruins, we climbed back down and headed straight for the railway station in order to catch our 11:15am train to Aguas Calientes. The only problem was…the trains had all stopped running. Protesters sitting on the tracks that day managed to successfully block all trains coming in and out of Aguas Calientes, the gateway to Machu Picchu. 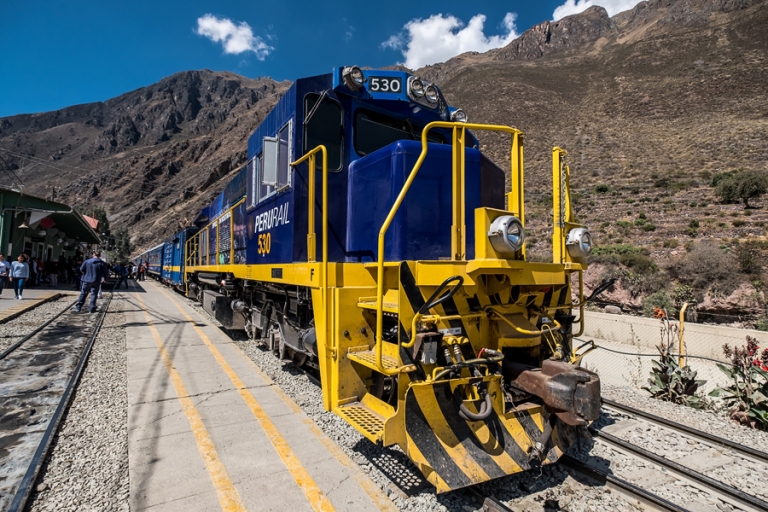 So our patient and hopeful group crossed our fingers, piled our bags in the covered shelter area of the train station, and we waited for news on the train service. We ate our boxed lunches, drank the complimentary coffee, and shared sympathetic smiles with other stranded travelers all worried about the prospect of not being able to reach Machu Picchu.

Over the next several hours, hundreds of additional passengers joined us on the platform to wait for the Little Engine That Could even though it couldn’t. A group of school children performed cheerful songs and dances in the grassy area behind the shelter. All of this was going on while our faithful guide, Eddie, paced the tracks and stayed on his cell phone to keep informed about the current situation. 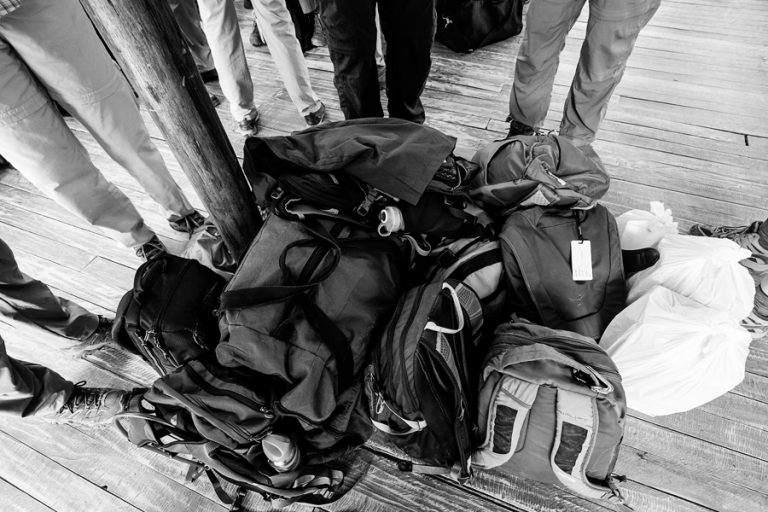 He found out from his sources that no trains were able to run, and that some trains were stopped along the railway with passengers on board. We heard reports of the protesters ripping up parts of the train tracks and becoming violent, including throwing objects, rocking cars, and starting fires, which is one of the reasons why it wasn’t ever feasible for us to walk the 20-ish miles along the tracks to Machu Picchu.

Thankfully we also eventually received news that the Cusco police arrived to the scene and were able to step in to remove some of the demonstrations blocking the tracks. Track repair happened at an impressive rate, trains slowly began to move again, and after over six hours at the station we finally boarded a train! We were lucky to be the first group in line for the next train and to arrive safe and sound (albeit much later than expected) to Aguas Calientes. We read heartbreaking stories on social media of people who were completely cut off from reaching Machu Picchu, or who were stranded without accommodations.

The demonstration drama actually continued to be an issue for us on Day Seven and that blog post is next, but spoiler alert: we totally got to see Machu Picchu, the Big Finale to our Sacred Valley adventure!