Okay, so let’s get cooking! This is the first of my Learning To Cook posts, and I’m a little late in getting started. When I first created my lessons list I intended to do one lesson a week (in no particular order) throughout 2013. Well, unfortunately the first two weeks of this year I was battling a cold, and who wants to cook while sniffling, sneezing and coughing? But I’ll do my best to play catch-up. I’m starting this weekend with an easier lesson – oats.

In the search for a breakfast that meets my challenging array of dietary restrictions (lactose-intolerance, wheat-intolerance, and an egg allergy), I have finally grown to like oatmeal which I actually used to detest. I found this clean-eating recipe for Slow Cooker Sweet Potato Oatmeal and thought, well that’s different. I’ve never had sweet potato anything for breakfast. And I’m not super skilled at making steel-cut oats, so I figured this should be good practice.

I gathered my ingredients and followed the directions word-for-word. I used the correct size slow cooker, I measured everything exactly, and I gave it the proper amount of time to cook. By the end of the 2.5 hours on low, it was still incredibly liquidy. The oats seemed cooked even though they were all afloat in there, so I ended up just putting the whole batch through a fine mesh strainer to drain the extra liquid. The remaining oats were the consistency I prefer, so this recipe turned out fine in the end! Can I chalk this up to developing good instincts in the kitchen?! Or maybe some people just like liquidy oatmeal. The original photo does look soupier than mine.

Short of draining the liquid after the cook time was up, what else could I have done? Should I have let it cook longer? Was there a way for me to know from the start that this was too much liquid? I suppose if I make it again, I will try cutting the milk and water in half, or maybe just leaving out the water altogether.

This will be good with some walnut pieces mixed in. Chris also suggested marshmallows (like in the traditional sweet potato side for the holidays), but I think I’ll keep it clean and wholesome. Well, okay…I did sprinkle a little brown sugar and extra cinnamon on top. Lesson complete! 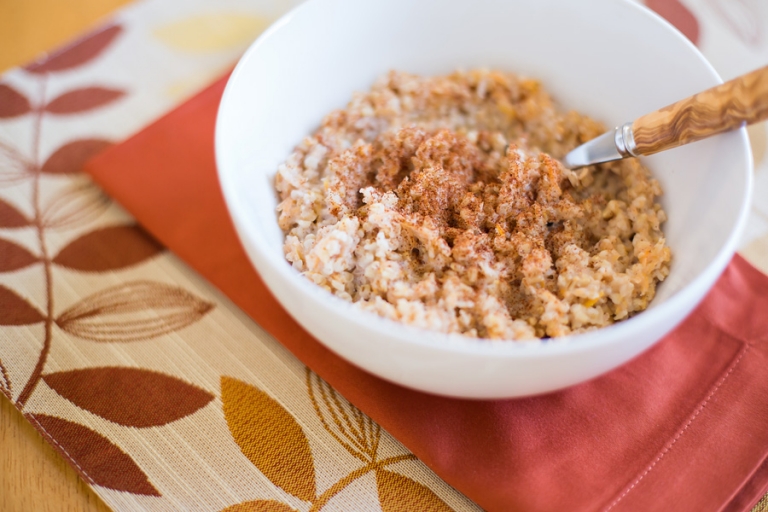