It was (almost) around this time last year that I started to learn how to snowboard! It’s something Chris had tried a few times before and he wanted to get back into it, so I thought I’d give it a try so it could be something we could enjoy together. Though I admit I was pretty scared to try it – having both of your feet stuck to one board that you can’t easily detach (like skis) while barreling down a slope seemed like a bad idea to me.

The first time I went was in Colorado where we signed up for a private lesson with one of the instructors at Eldora Mountain Resort. I was warned ahead of time that the learning curve is quite steep, and that’s an understatement! But I was immediately* in love with it, despite also being so frustrated with how HARD it is. I think it took me about five snowboarding trips and many many bruises before I really “got it.”

*Edited to add: Chris just reminded me that I wasn’t quite immediately in love with it. I was pretty flustered with the first few hours of the lesson. Our instructor had us practicing on a small hill, where we’d ride down and then climb back up with the heavy board strapped to one foot. It’s probably the most exhausting thing I’ve ever done! So actually, I think I said, “I hate this,” when we were on break. 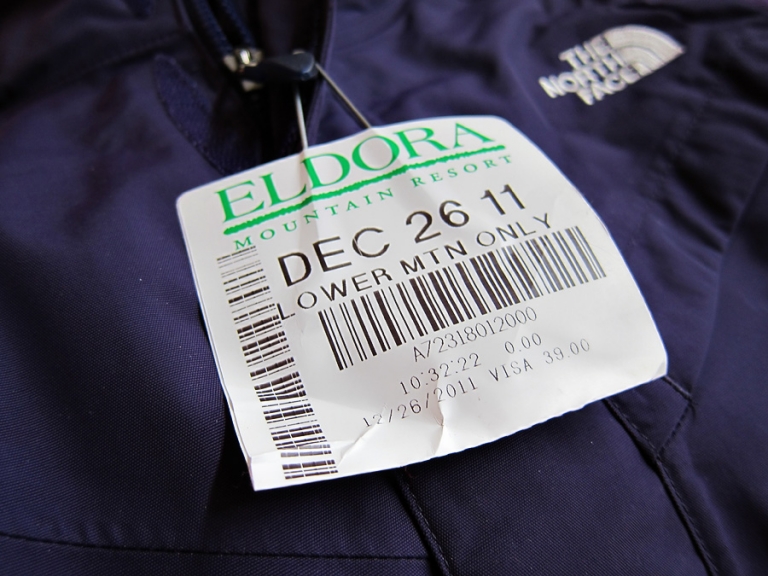 Our instructor, Amir, was awesome. He was patient and really focused on the basics and a good foundation. He pushed me to challenge myself, but not too far past what I was comfortable with, alhough I did take a hard fall at the end of the day when he let me go down the bottom of the trail by myself. I’ll never forget laying on the ground looking up at the sky when Amir rushed over and said, “That was AWESOME!” Apparently I had linked turns a few times at the end of the run (by accident) right before I fell. Okay, awesome, but painful! My tailbone still isn’t quite the same.

I left with a few skills under my belt (and a very bruised tailbone), and once we were back home I immediately went out and purchased my own board, bindings, boots, helmet (critical!), and goggles. 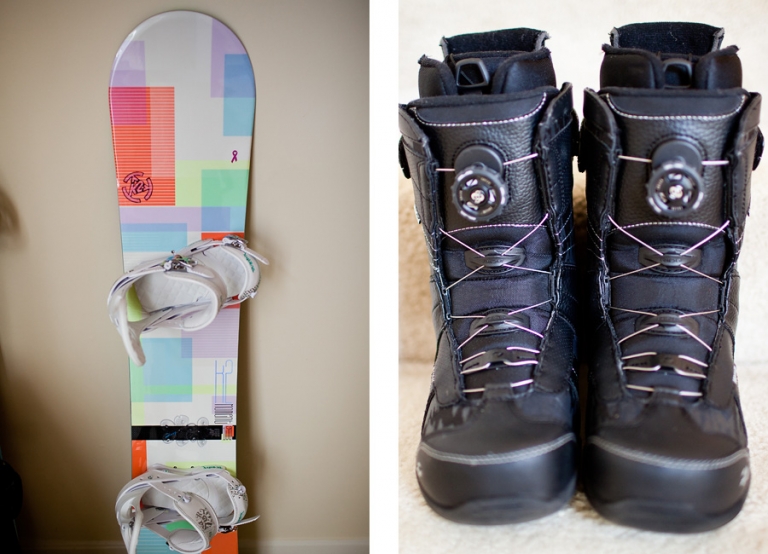 We went nearly every weekend to Whitetail Resort in Pennsylvania to practice, practice, practice. Thank goodness for the small hills and gentle slopes of a PA mountain, unlike the “real” mountains of Colorado. Much better for a beginner! Though we don’t have much in the way of real snow here – it’s mostly man-made snow over a hard layer of ice, so there are pros and cons. (Falling on ice is a major con.) 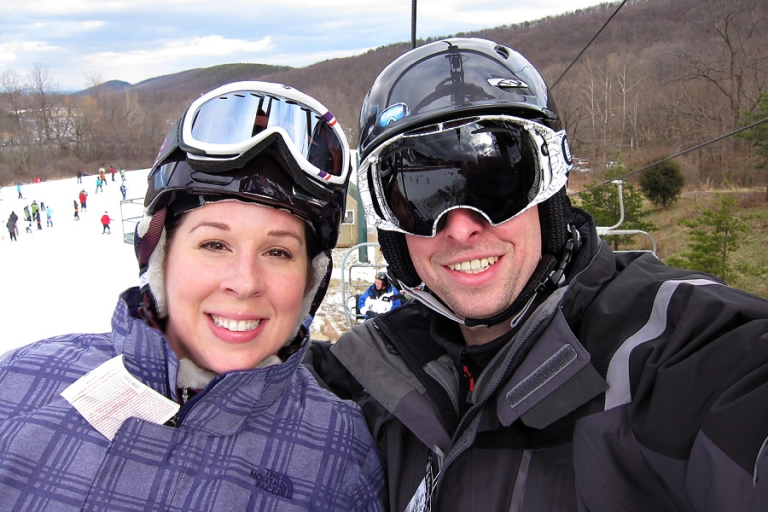 Here I am taking a short break on the side of the beginner trail. In addition to the learning curve, snowboarding as a beginner is exhausting! Thankfully all those waterproof layers allow me to sit in the snow off to the side and rest every once in a while. 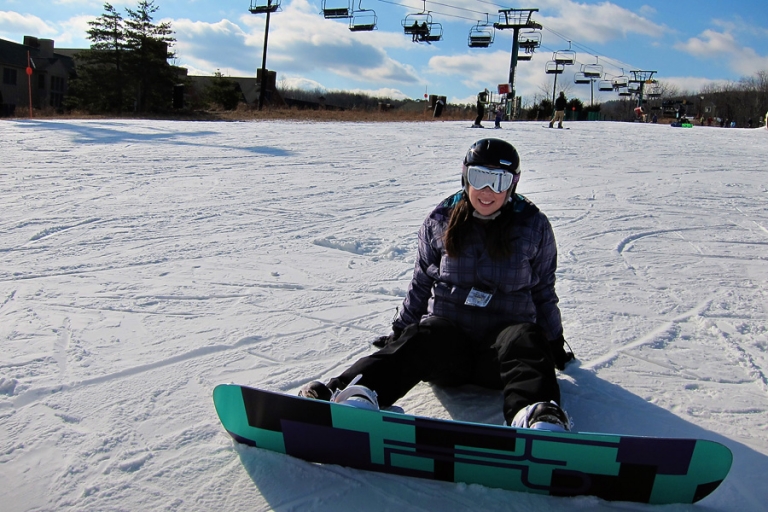 I finally learned to connect everything together once I actually got OFF of the bunny trail, and went to a more difficult but less populated green trail. Look how crowded that bunny hill is! So many people to run into. Once I had a little more room, everything just clicked, and I started linking turns – this time on purpose. Yay! 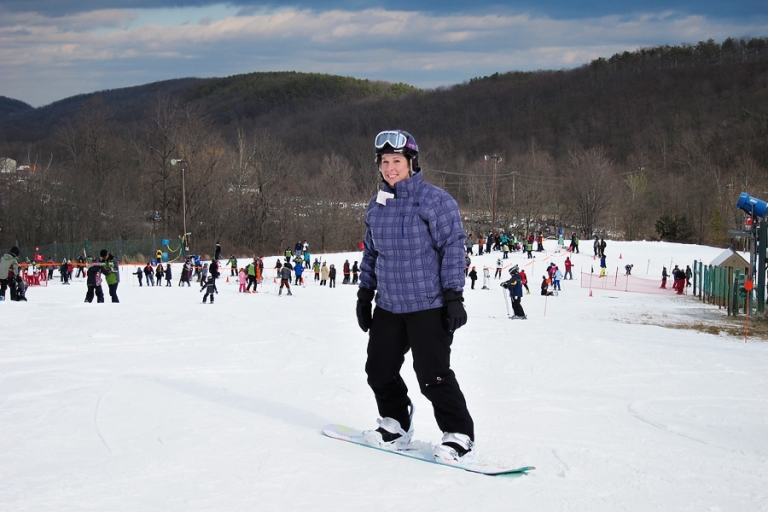 And with that, I crossed off #49 on my old 101 in 1001 list for prosperity and to you know, keep it official. I’m really looking forward to our second season, hopefully with fewer bruises! P.S. We don’t really say, “shredding the gnar” except to joke around, but snowboard slang is pretty fun. “Sweet cherry cherry pow-pow” means fresh, untouched snow (powder). And there were a few occasions where I “scorpioned,” meaning I fell face-first downhill with my board overhead. There are no pictures of that, thankfully. 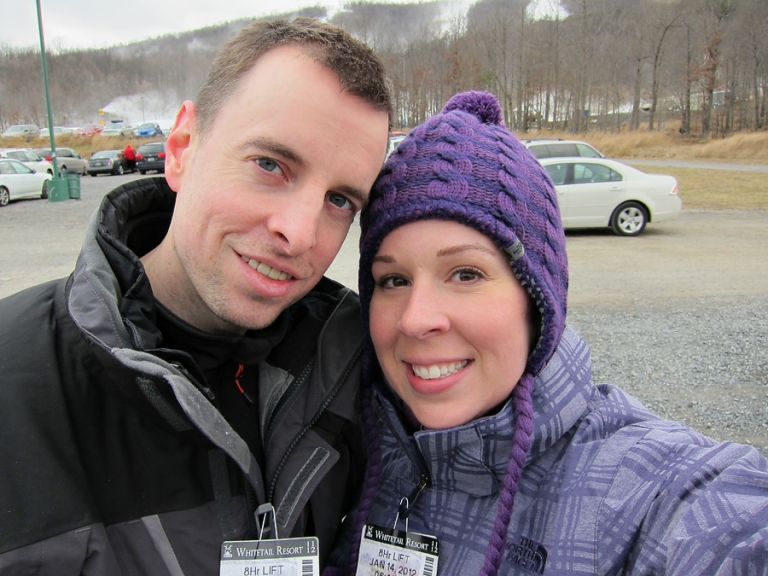 So what about you? Are there any new hobbies you want to try? Want to give snowboarding a try?! It’s (apparently) one of those things that you have to push through no matter how hard it is at first, and if you’re patient (and stubborn) enough, everything will just click and it gets really fun! Let me know if you decide to try it! And if you need any advice on protective crash gear, I’ve done TONS of research on pads, helmets, wrist guards, etc. And I’ve done lots of crashing, so I can vouch for what works. 🙂