Snorkeling the Reef in Belize

Underwater photography makes me feel like I’m starting at square one as a photographer. I find that both refreshing and frustrating as hell. Trying to capture a skittish fish on the move while I’m bobbing around with the current reminds me of being a complete newbie behind the camera. It doesn’t help that I’m also used to working with a single lens reflex system that has instant capture capabilities instead of a point-and-shoot with considerable lag time. But I like a challenge and I am determined to practice and hopefully get better. I might even be willing to plop down the cash to buy a housing for an SLR if we get into diving. One thing at a time though, and notice I said “an” SLR – there’s no way I’m putting my baby (Canon 5DMIII) into the water. The images below are taken with the Canon PowerShot D30 waterproof point-and-shoot. Trust me, for every image that turned out, there are about five shots of a blurry fish, my leg, or the bottom of the ocean.

I had several opportunities to practice my underwater photography skills in Belize. Chris and I snorkeled all over the water along Ambergris Caye and towards Caye Caulker. We started with one of the most popular spots, Hol Chan Marine Reserve. Thanks to Ernesto and an early start to the day, we had the entire park to ourselves with not a single human in sight other than the park ranger. Yes, there’s a park ranger on the water tethered up for the day to take park entrance fees from the touring groups – what a cool job, right? But when we pulled up, not a tour group was in sight. (For reference I think we arrived around 7:30am.) And right when we jumped into the water, we were treated with the number one thing I was hoping to see in Belize – sea turtles! Two of them, in fact. 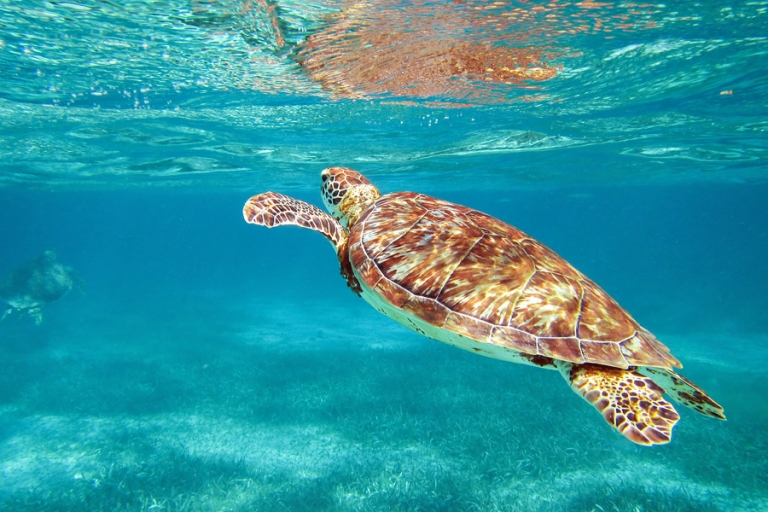 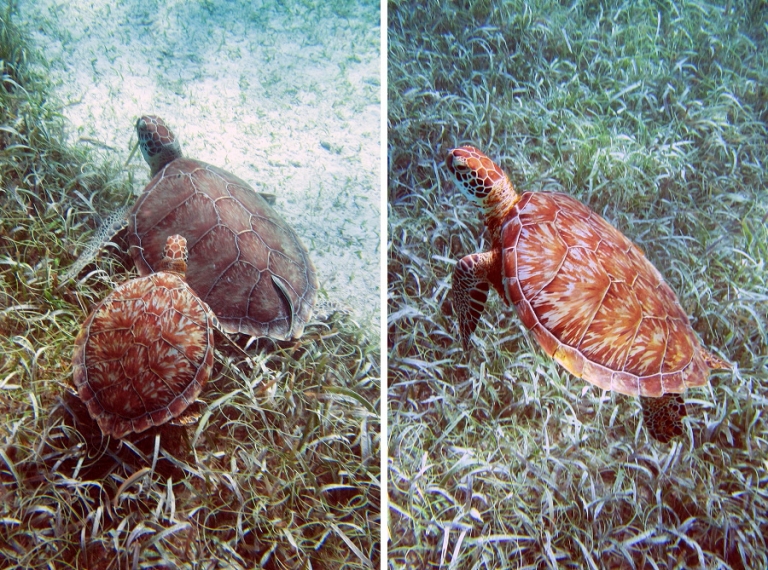 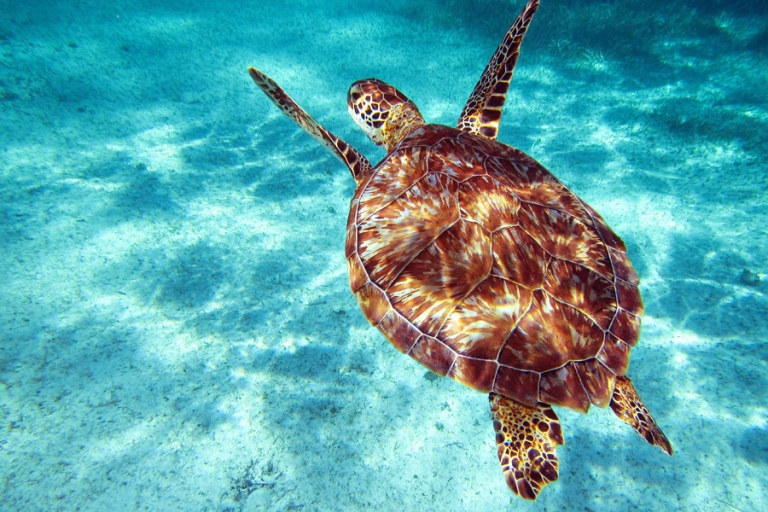 I couldn’t believe the health of the massive coral system (Belize is home to the second largest reef in the world) and thus the abundance of sea life at Hol Chan. We swam through a huge school of horse eye jacks, and I actually had my own jack following me the entire time we were at Hol Chan. Every single time I looked over to my right, there was my curious friend tagging along. Hi, Jack! 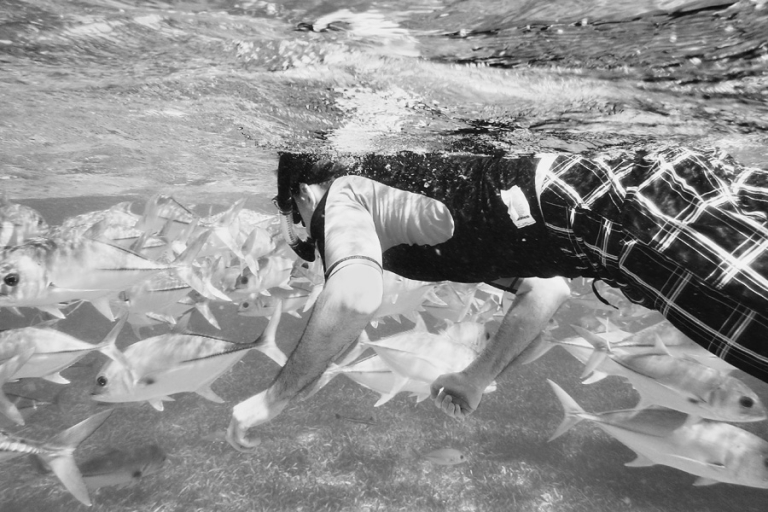 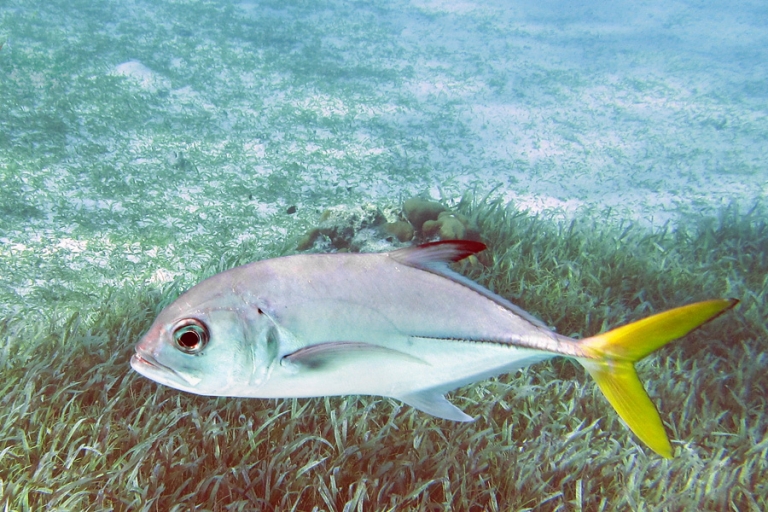 We got to see some fish species we had never seen before, including this gorgeous queen triggerfish and a bunch of needle-nose fish that gathered near the surface. 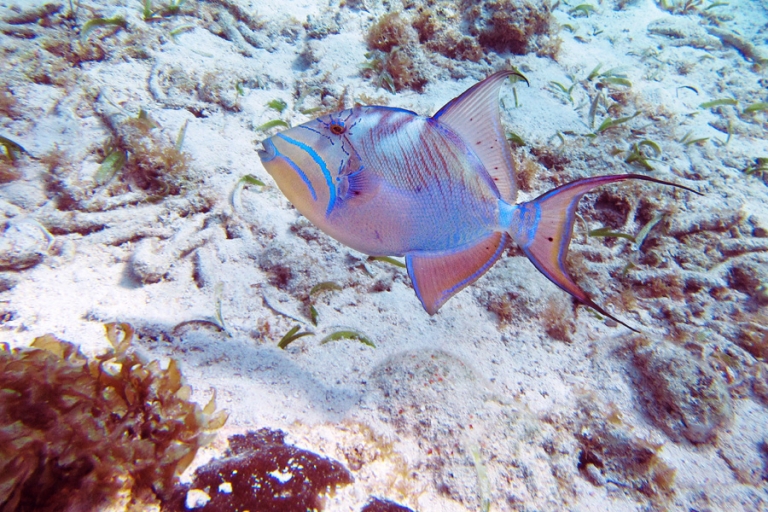 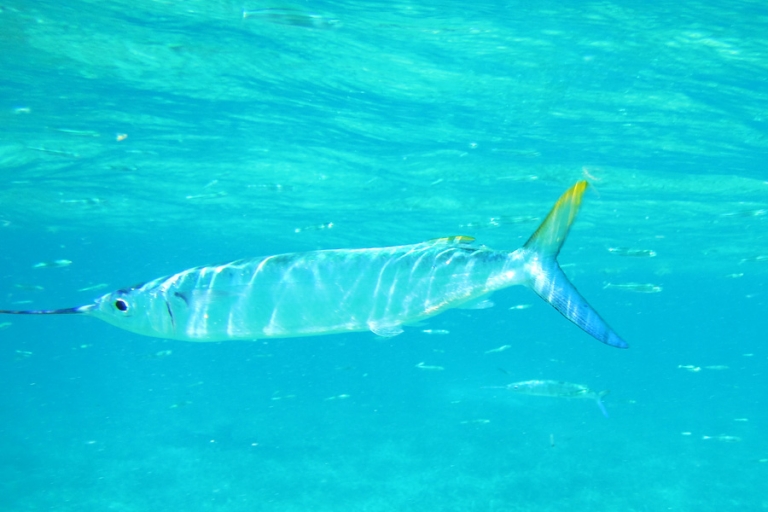 But perhaps the most thrilling part of Hol Chan was the presence of some larger creatures that we hadn’t swam with yet. We saw our first nurse shark here, sleeping at the sandy bottom near the coral. It was about eight feet long, and didn’t seem bothered by us. We also spotted a great barracuda – Chris was in charge of photographing that one while I tried to stay as far away as possible. They’re fascinating, but it’s creepy how they just hover…staring at me. 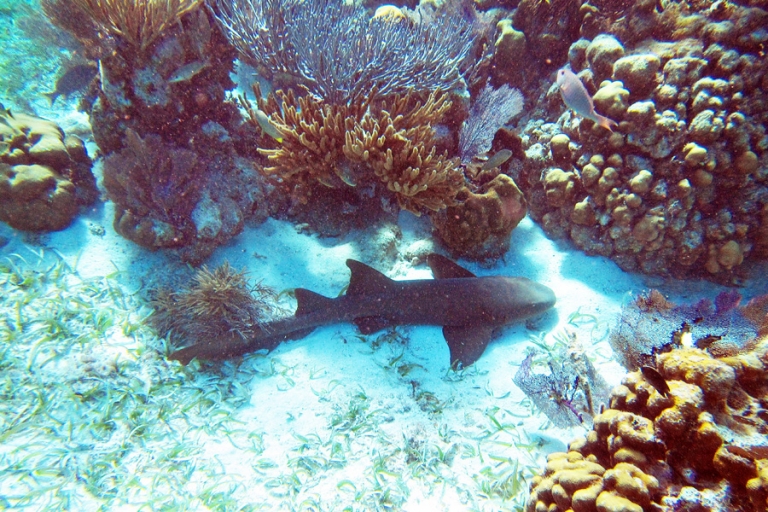 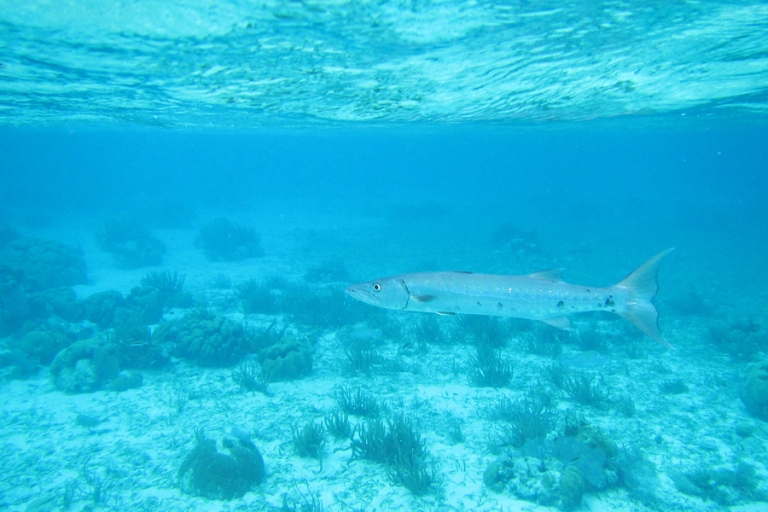 My other favorite moment was watching this majestic spotted eagle ray glide through the water. I’ve only ever seen them from above the surface (we spotted a pair while on a boat in Grand Cayman) and could have followed it all day. I know they have venomous barbs, but for some reason rays don’t bother me. This one had a wingspan of about 4-5 feet which seemed huge to me, but they can get up to 10-feet wide. 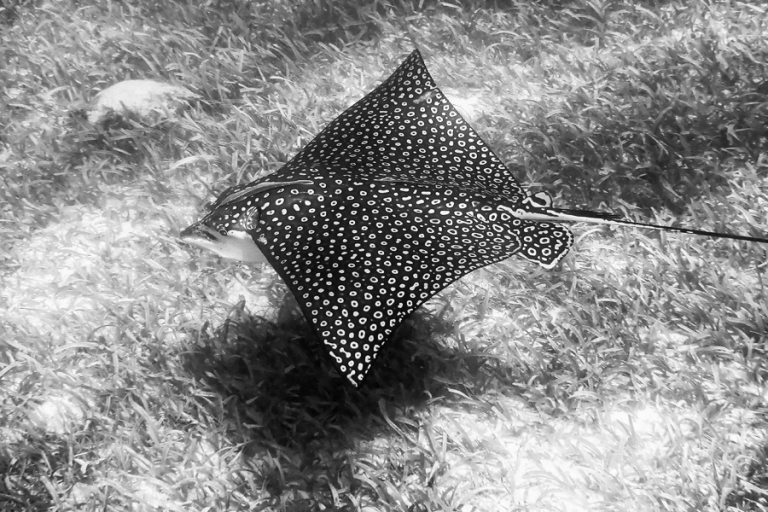 A short boat ride south of Hol Chan Marine Reserve lies Shark Ray Alley. Not more than a few minutes after we arrived, we noticed large shadows looming in the water circling our boat. The sharks had arrived. They heard the motor on our boat and came begging for food much like the stingrays at Stingray City in Grand Cayman. The phenomenon is quite similar actually – the site became active with hungry sharks and stingrays many years ago when fisherman used to clean their catch here and the sharks and rays learned that this was a reliable location for food. So, while I’m not crazy about the idea of intentionally feeding wild animals, this is an experience not to be missed while in Belize. We only saw one variety of sharks, the nurse shark, and we were reassured that as long as we don’t stick our hands into the mix of the feeding frenzy, we were perfectly safe. I obeyed and kept my limbs in check while I swam with these beautiful fish. The largest shark we saw stretched to twelve feet long and none of them seemed to give us much notice.

And again, we had this area all to ourselves as well since Ernesto had the forethought to bring us here early enough to avoid the crowds. If you’re able to take a trip to Hol Chan and Shark Ray Alley (they’re often combined into one excursion), opt for the earliest shift. As we were leaving, we saw several boats coming in, and Ernesto assured us that the crowds would thicken as the day continued. 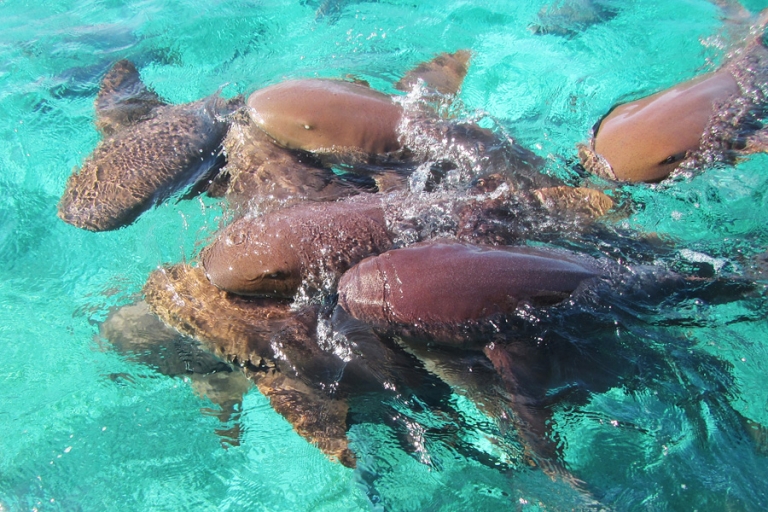 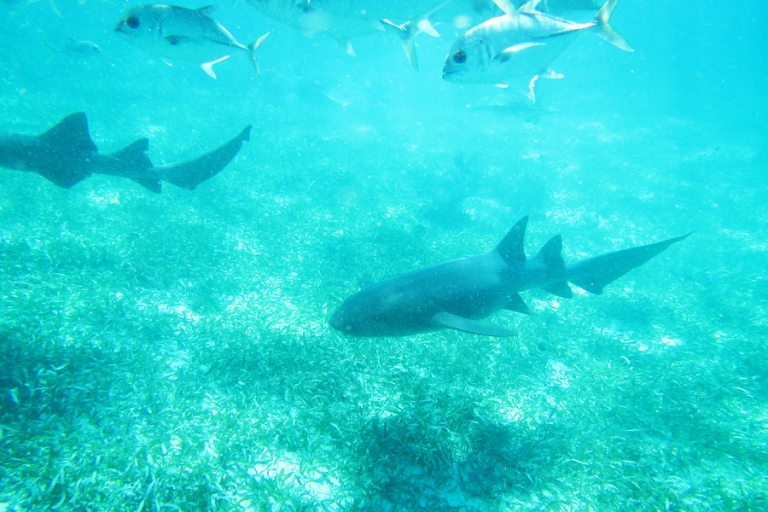 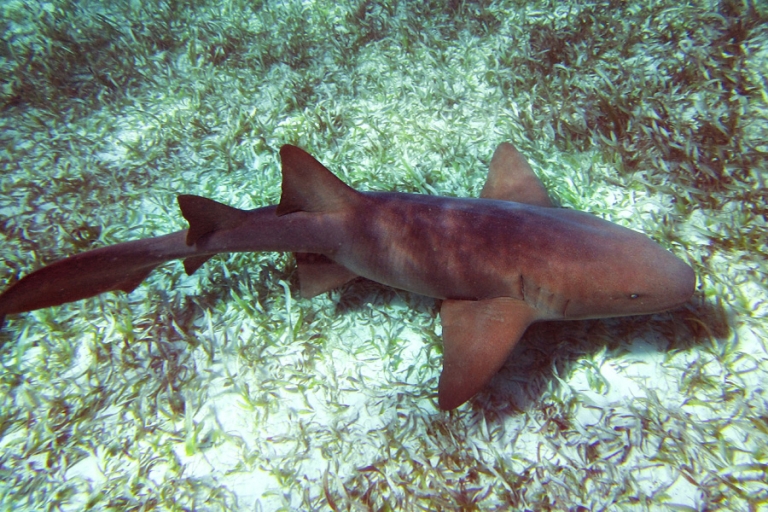 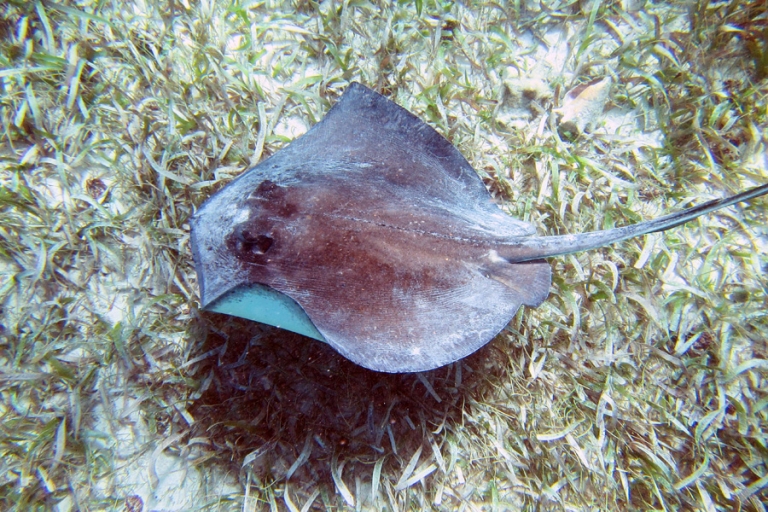 Our third day of snorkeling included a couple of spots. We started near a dive site called Robles Canyons for my favorite kind of snorkeling – shallow waters and lots of smaller coral heads. I love to relax and float above a coral formation and just gaze into the nooks and crannies, trying to spot every detail of life underwater. I got to see a flamingo tongue snail for the first time, but darn it if I couldn’t get a photo of that tiny thing. The photography was still so tricky despite having better lighting in shallow water. The waves made it difficult for me to stay still, but I enjoyed exploring this area. 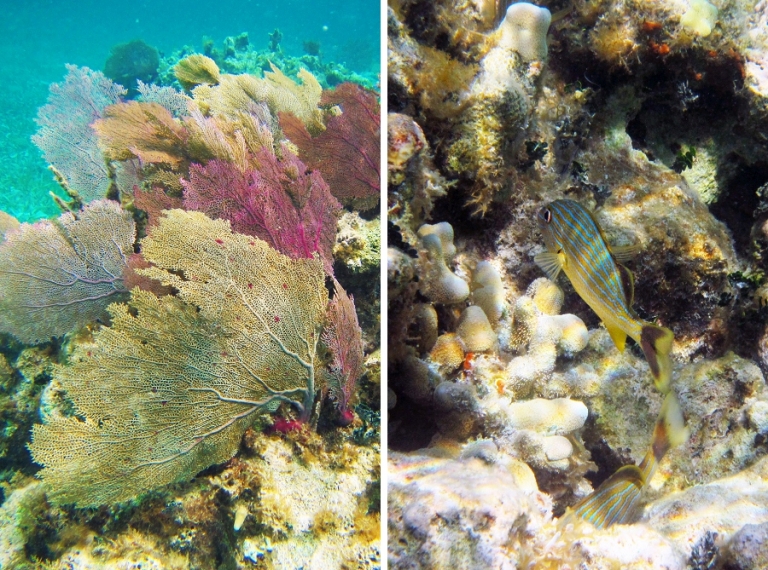 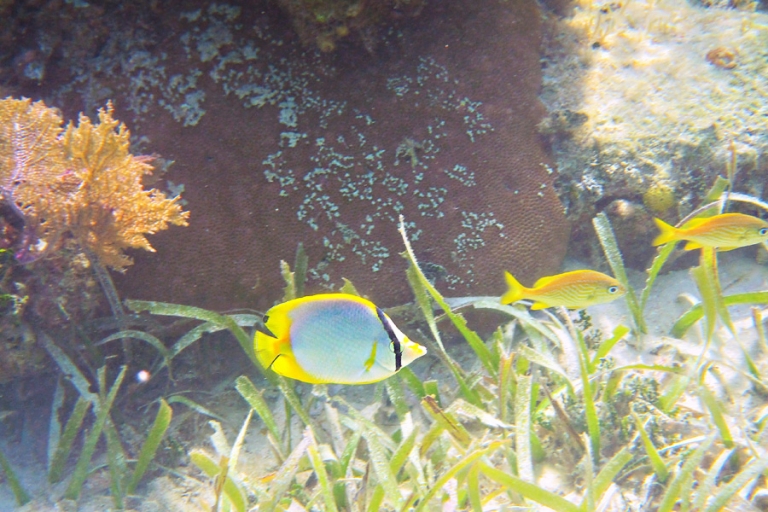 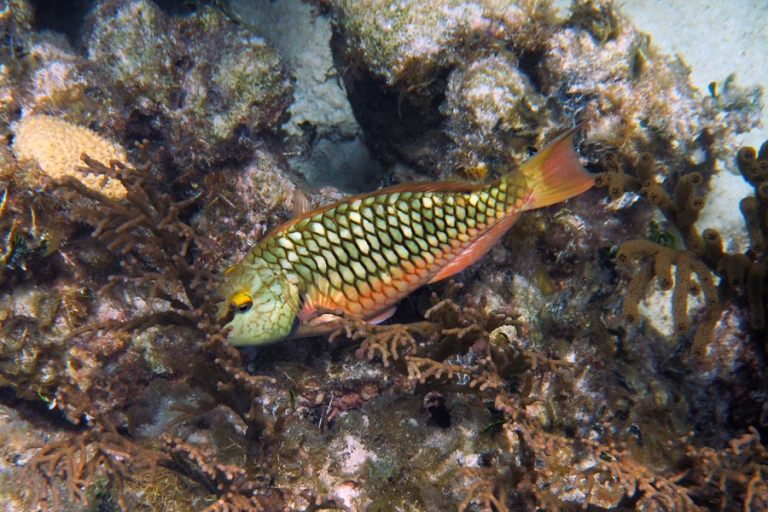 Our last snorkeling stop proved to be my favorite experience of the whole trip. Ernesto cleaned fresh conch while Chris and I snorkeled and as he discarded his scraps in the water, hundreds of sergeant majors and grunts surrounded us. I felt like I was part of their school. 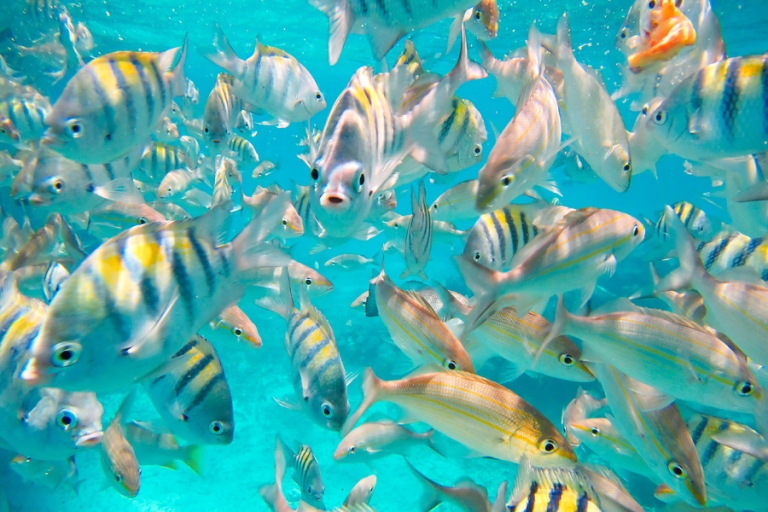 And then this happened. An incredibly curious and playful loggerhead turtle swam right up to my face! He stayed with us for a good 10-15 minutes, just swimming above us, under us, and pushing off of me with his flippers. He came up to my camera several times, so close that I often couldn’t even focus on him! It made the trip for me. Favorite moment for sure. 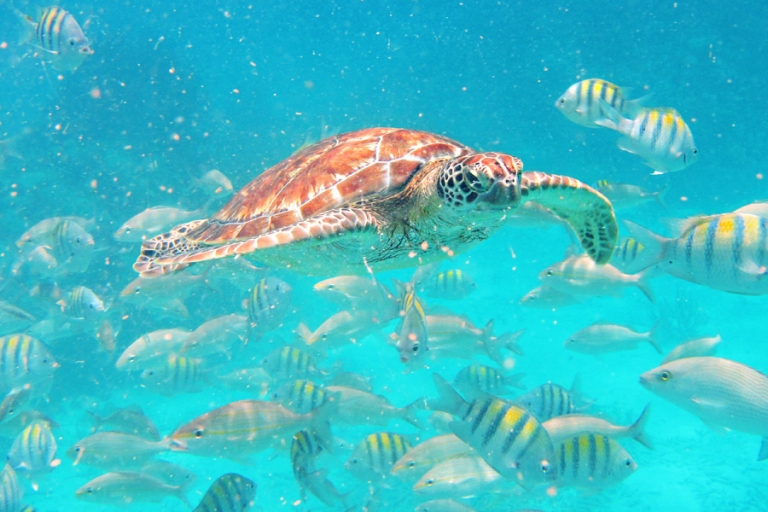 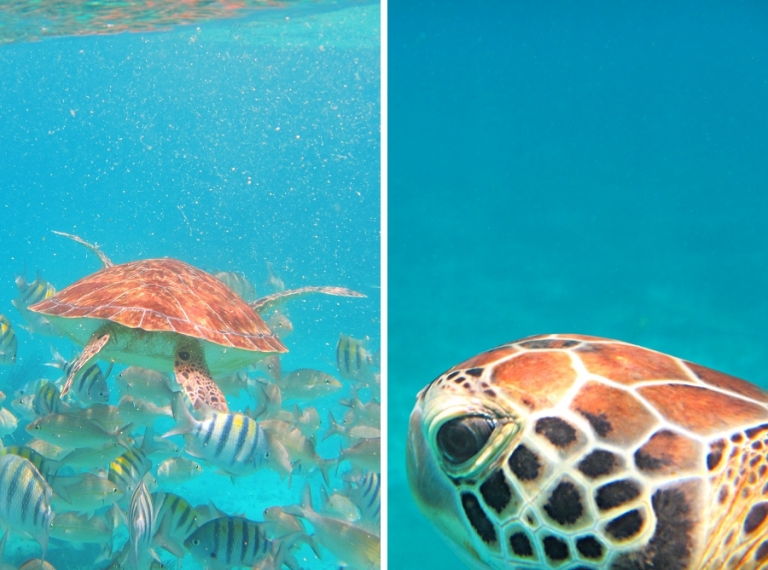 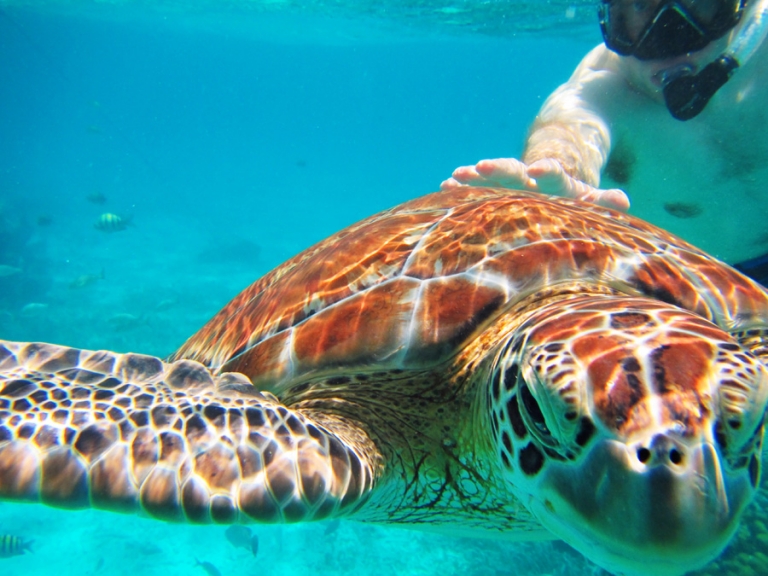 Not pictured: our trip one morning to find the manatees. We spent some time swimming inside and outside the reef trying to scout out a manatee, but a fishing boat scared him off. No matter – the time we spent with that adorable sea turtle topped anything else on the trip for me! That, and the day went went looking for manatees Ernesto made us a delicious fresh conch ceviche from scratch that we enjoyed with tortilla chips right on the boat. It’s those little moments, you know?