Back to Ring Road Day Two! Our tour of Southern Iceland was one of the busiest days of the trip with the most planned stops, but to make it even more jam-packed we kept stopping the car (sometimes every 10 minutes) to try to capture the essence of Iceland. I’m not sure if it’s even possible with other-worldly landscapes like this. 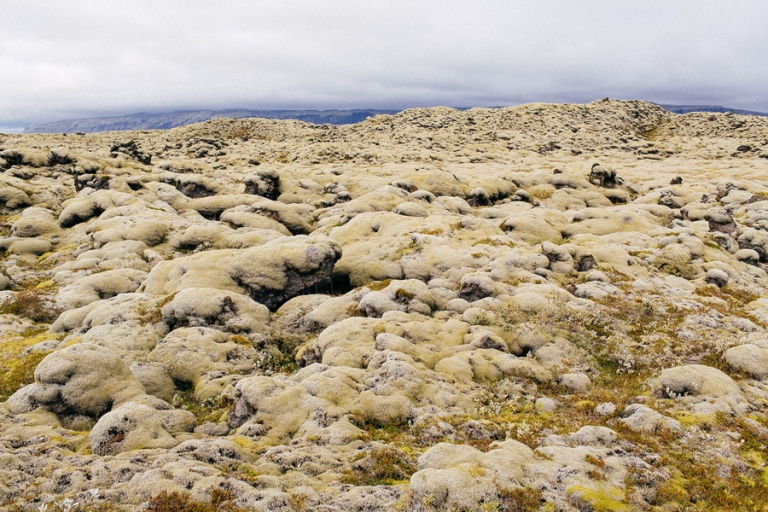 One of the spontaneous random stops along the road included this one at Laufskálavarða where we learned the real meaning of the rock stacks, or stone cairns, scattered throughout Iceland. After learning about the tradition, I topped one of the existing stacks with a pebble for good fortune. 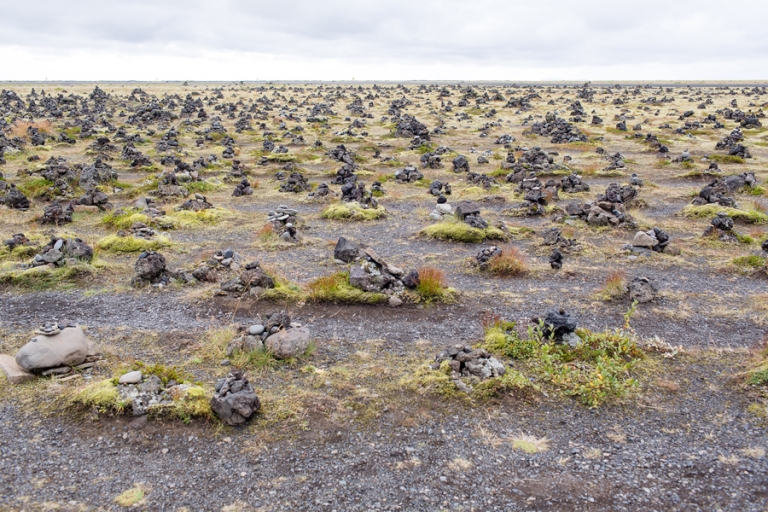 The next stop at Fjaðrárgljúfur canyon was one of our favorites of the day, although it’s hard to rank them with so many great sights to see! The canyon is just a short ride on an unpaved road off Rt. 1. I found excellent directions to the canyon online here. Fjaðrárgljúfur also shows up in Google Maps, so it’s pretty easy to find. We loved playing on the edges of the cliffs even though the signs told us to stay away from the edges. Just kidding, we didn’t go near any edges – only as close as seen in the photos below, and we were very careful. Also? Not a single drop of rain fell the whole time we were there! Which is great, because the ground was already soft and spongy, and we didn’t need it to be extra slippery with that big of a drop into the canyon. 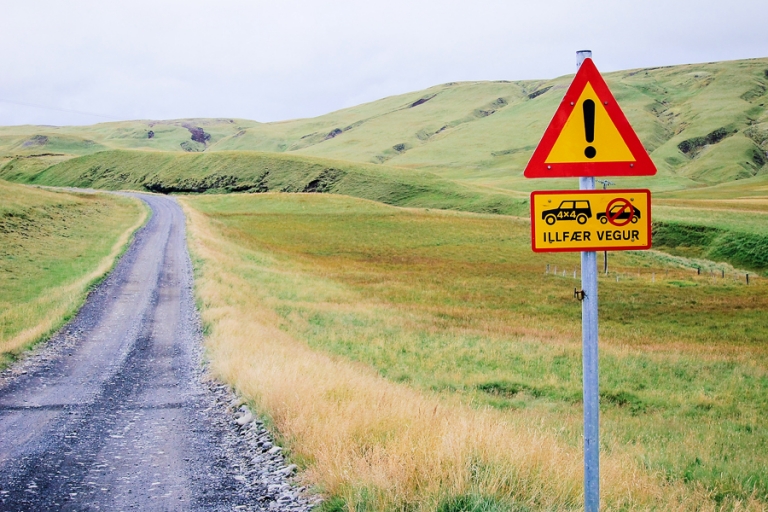 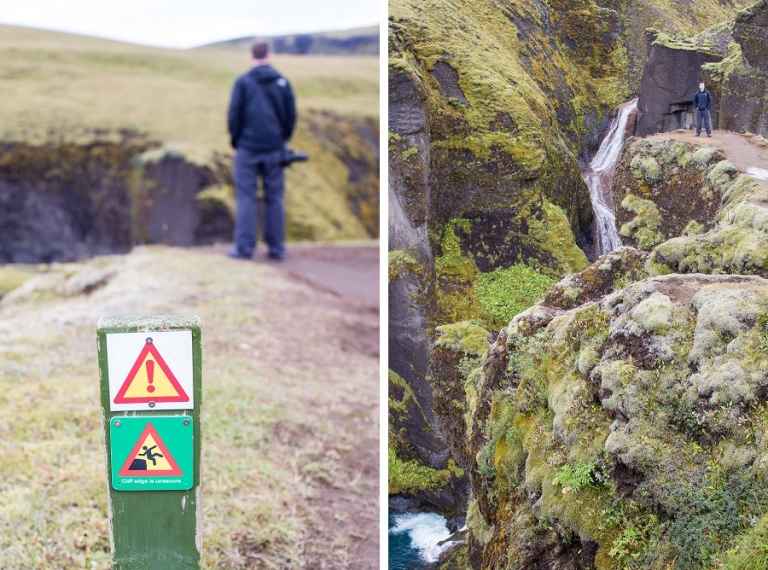 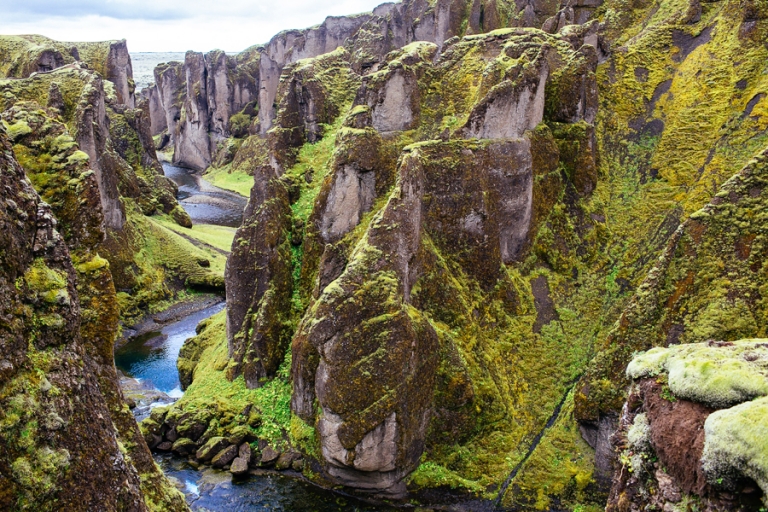 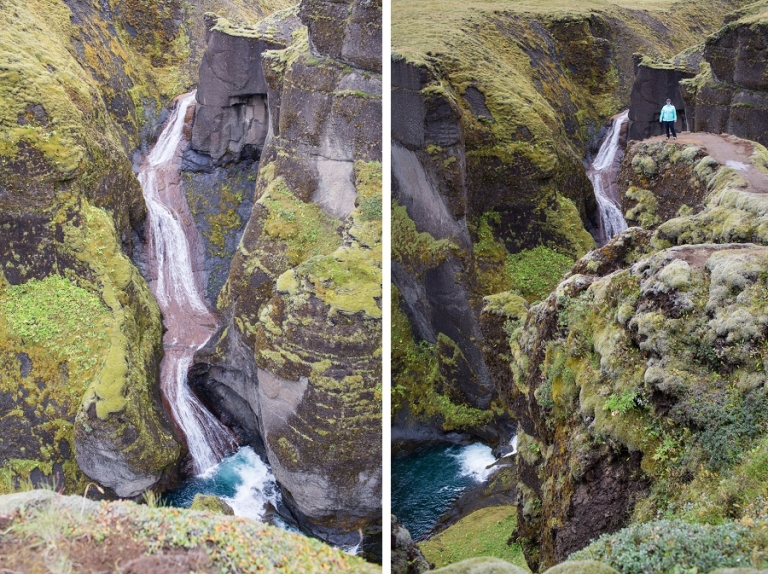 A while after we left the canyon, something magical happened – the skies cleared considerably! Expansive stretches of blue sky appeared nearly out of nowhere, and we were even casting a shadow with the car. We could finally see the entire horizon to confirm that there were indeed mountains out there. All over the place. They had been completely hidden for the first leg of our road trip! 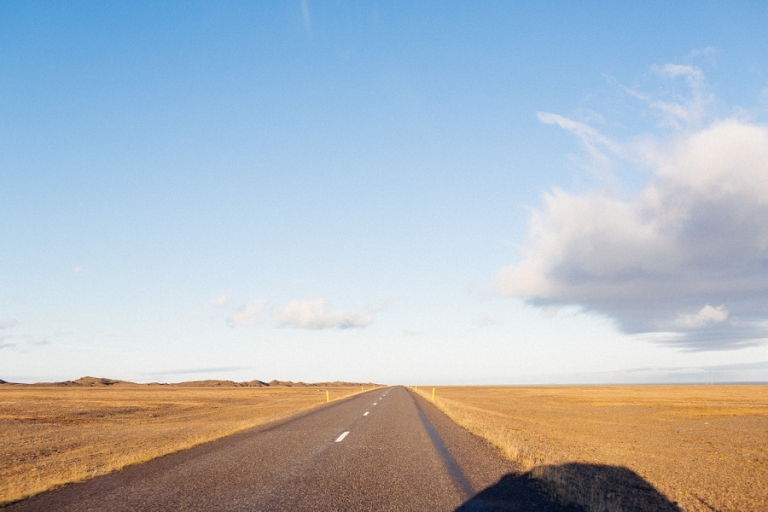 Our day wrapped up with a sunset over stunning Jökulsárlón, a glacial lagoon in Vatnajökull National Park. Did you hear that? A sunset! That means the sun stayed out and we still had a pretty clear sky. I was so thrilled you’d think I hadn’t seen sun for months. We were able to spend the entire time at the lagoon without any rain, which means lots of photos. And speaking of thrilled, you should have heard me when we approached the lagoon – I saw just a glimpse of it between hillsides and flipped out. It’s just so pretty! I was mesmerized by the textures and patterns in the ice to the point that I hardly took any photos. It was one of the many times I felt completely overwhelmed and immobilized by Iceland’s beauty. Using the wide-angle lens, I tried to take it all in with the landscape shots below, but I felt like I just couldn’t capture it all in an image. Chris took the amazing close-ups of the icebergs (I’m obsessed with the last black-and-white image of his) and he also took the photo of the cute little seal. 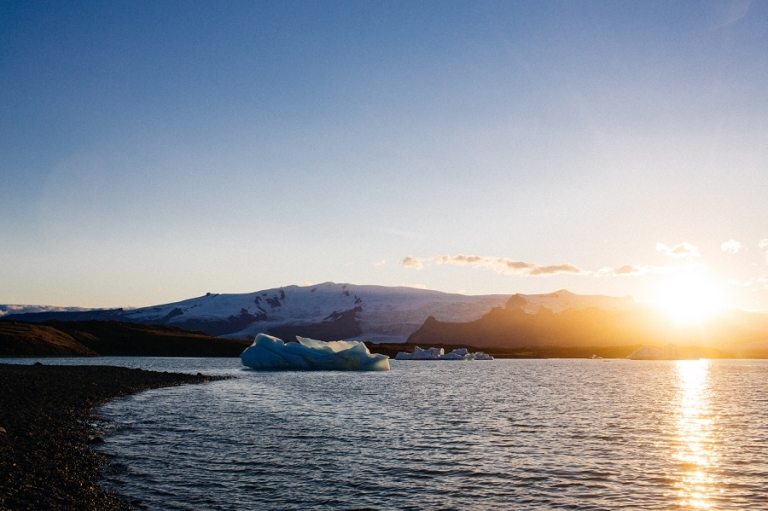 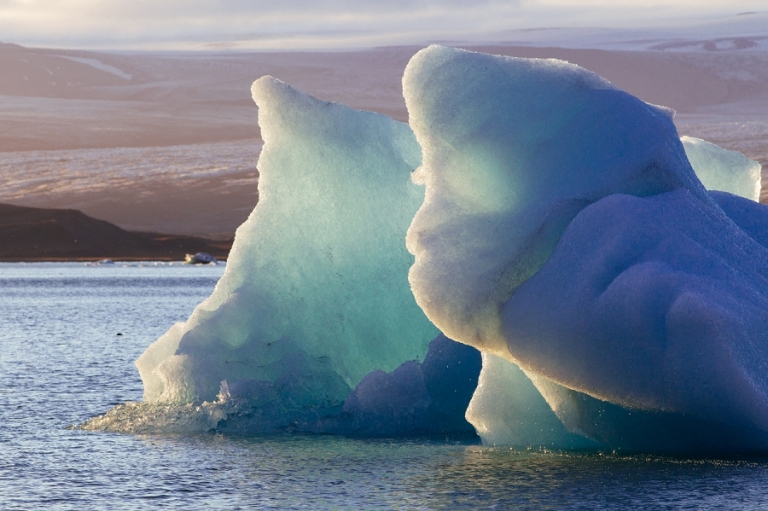 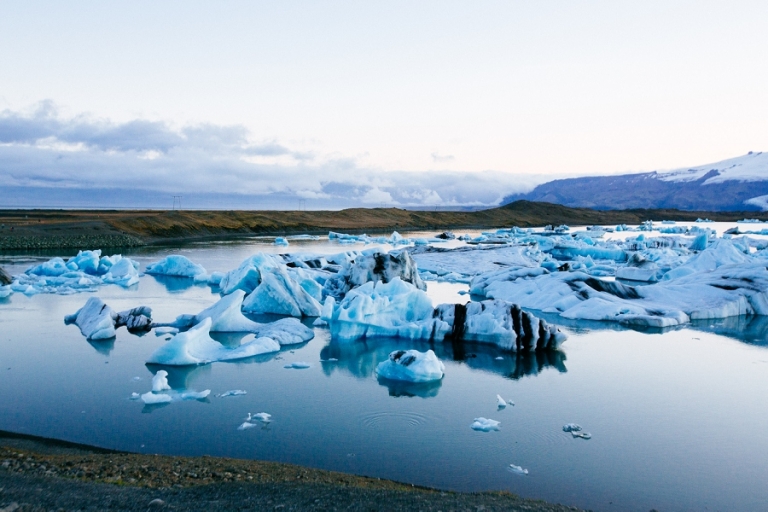 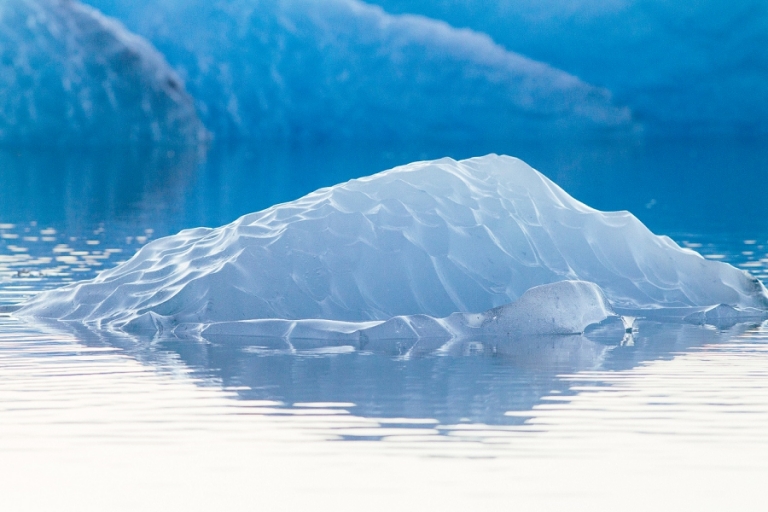 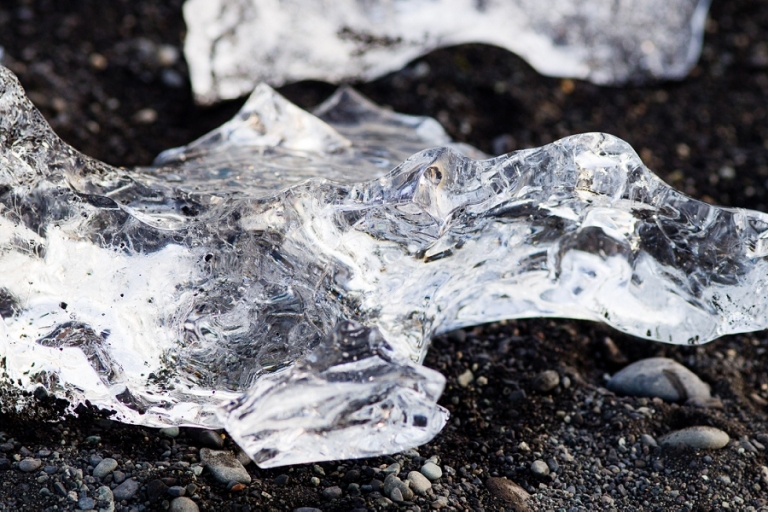 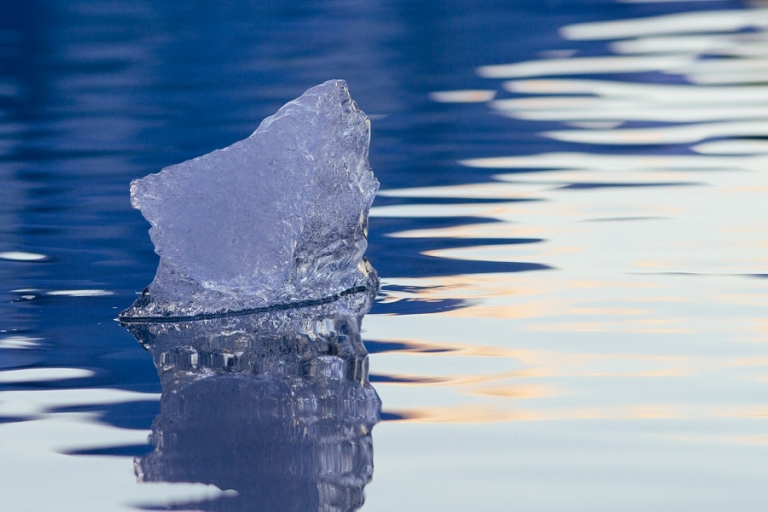 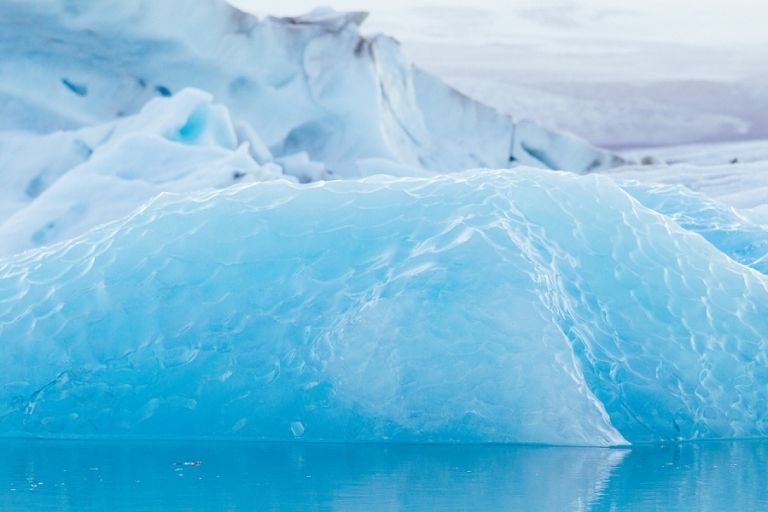 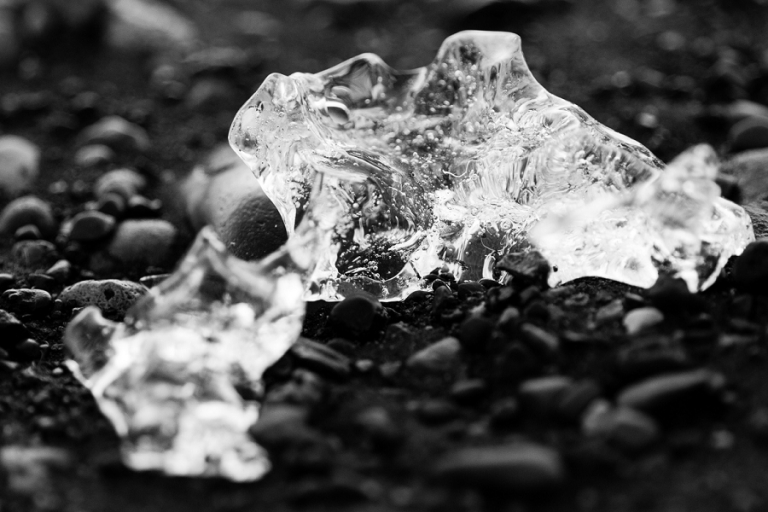 We checked into our hotel pretty late that evening and didn’t eat dinner until almost 10pm, but it was worth the long day of amazing sights and photo opportunities. We crashed hard that night, and headed out the next morning for Day Three – the Eastern Fjords and the amazing landscape of Mývatn (seriously, it felt like we were on Mars). Stay tuned!