(Doesn’t that sound like a good book title?) As you may know, I’m not super savvy in the kitchen and that’s an understatement. I’m getting a little better at some things as I practice new recipes and take classes, but I’m still cullinarily clueless in general, and every once in a while more often than not I have some sort of mishap in the kitchen such as the banana bread incident this past Sunday.

Bread recipes almost always trip me up, so for practice I wanted to try my hand at baking something simple like a banana bread from scratch. I won’t drag this post out into all of the details from mise en place to the point where I had a mini melt-down and threw the entire loaf of bread away. Instead I’ll fast-forward towards the end of the baking process when I went to check on my delicious dough. The cook time was indicated in the recipe as 55-60 minutes, so at 50 minutes I checked on the loaf and found it to be beautiful on the outside, but needing just a few more minutes on the inside per the toothpick test. And because it did look so pretty, I grabbed my camera for a really quick shot, intending to take more photos after it was done and sliced. So I do have a “before” photo for you. 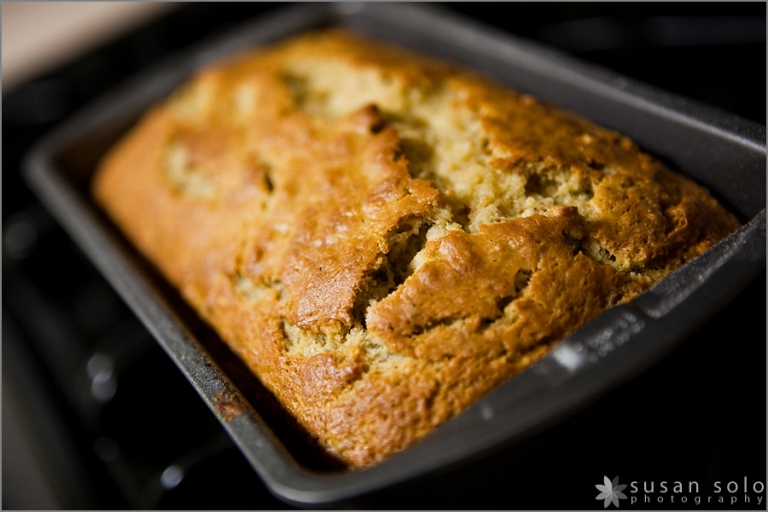 Unfortunately, when I went to put the bread back into the oven for the final 10 minutes, the pan slipped right out of my mitts and ended upside-down on the rack in the oven. And the middle was just hot and soft enough that it slipped out (in slow motion, of course) and through the rack onto the bottom of the oven before I could get the pan right-side-up. Cue mini melt-down, which is also the reason I don’t have an “after” picture for you. Usually I have a better sense of humor about these things, but for some reason I was so frustrated about this one! I guess all the work that goes into making bread made me feel like I wasted a big part of my day. Plus it smelled so heavenly and I was looking forward to it!

In any case, I’m telling you this story because 1.) hopefully you’ll get a laugh out of it and 2.) because while of course it’s so great to cheer someone on for the things they’re good at, isn’t it also sometimes just a teeeeeeeeeeny tiny bit interesting (or satisfying?) to hear about what someone *isn’t* good at doing? I think it’s totally okay if you agree!