I have to confess, I didn’t even know the National Building Museum existed until earlier this month when I saw a Washingtonian article about an upcoming bizarre-but-fun art installation called The Beach running through September 7th. Chris and I love to explore pockets of D.C. that we haven’t seen before and I’m all about the bizarre-but-fun genre, so we decided to make a field trip out of it. 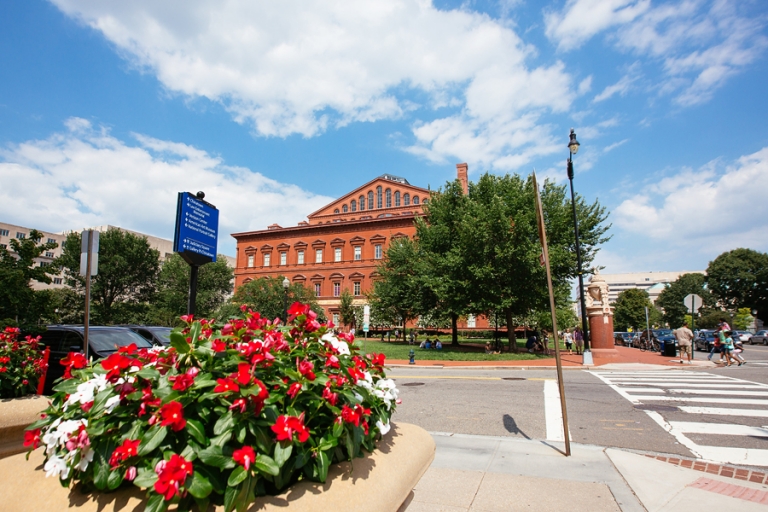 The museum is located four blocks from the Mall on F Street. We took the Metro and got off at the Gallery Place-Chinatown exit; Judiciary Square is a little closer, but it was closed at the time. Despite issues on the Metro that caused us to arrive at the museum much later than we anticipated, we still had enough time (1.5 hours) for a good visit before they closed at 5pm. Admission to the Great Hall and the gift shop is free, but all of the exhibitions require a ticket. 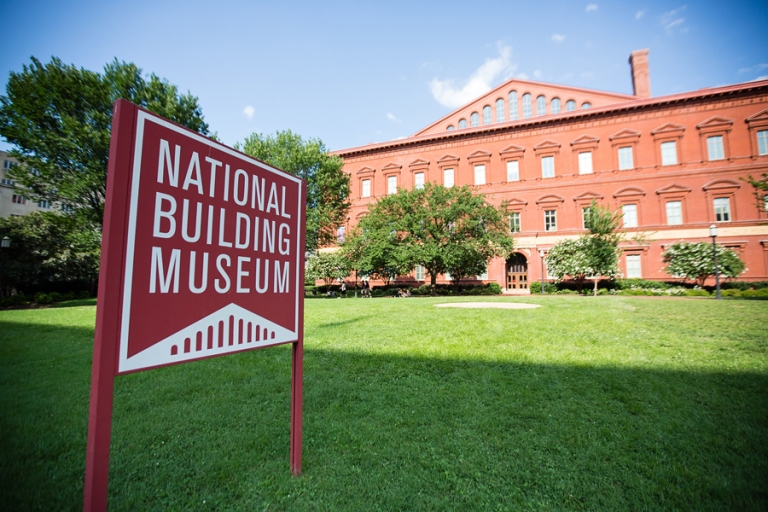 When we arrived, the line for The Beach exhibit snaked back and forth around a long queue and stretched far alongside the enclosure, so I gave up on the idea of paying for an exhibition ticket and getting into the ball pit because we only had an hour until closing time. (The lesson here: if you want people to flock to your museum, simply install a giant pit of plastic balls.) We walked around the second floor of the Great Hall for free instead and perused miniature models of interesting buildings throughout the world. Plus the stunning design of the Great Hall itself is something to admire. 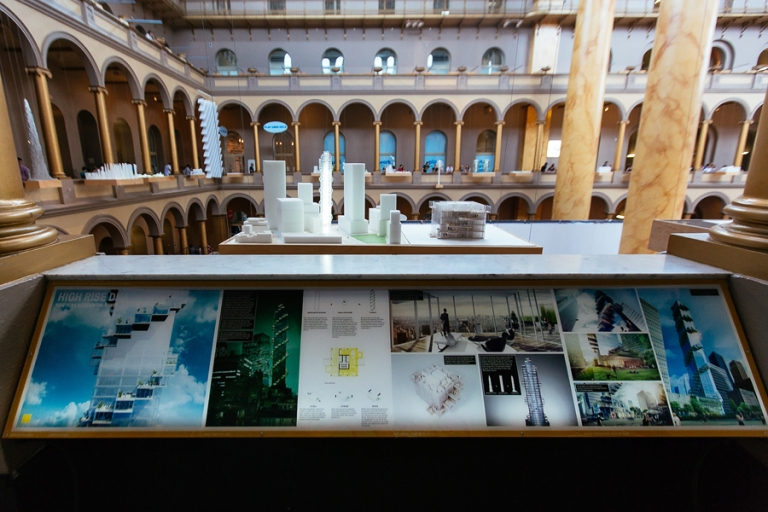 After almost an entire lap around the floor, I admit I felt a little disappointed in the amount of stuff to see in the Great Hall, but then a museum employee standing outside of the House & Home exhibition let us know that the exhibition was free after 4pm so we popped into a side room full of beautiful photos and displays related to the history of American homes. 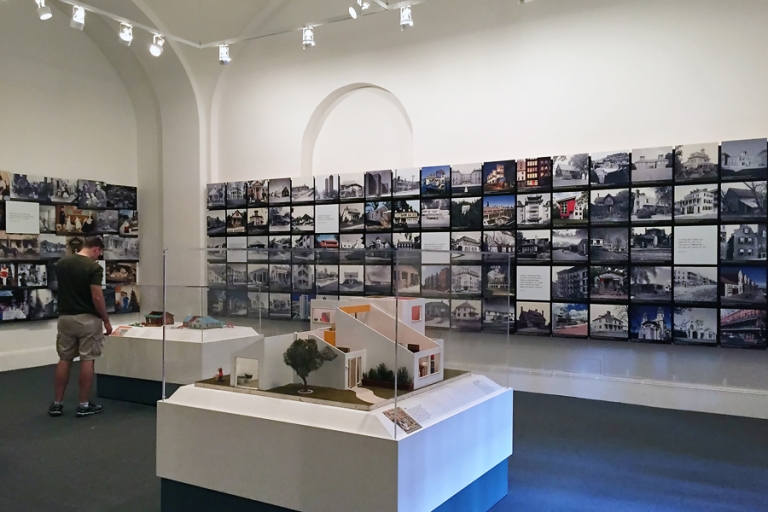 We loved looking at the homey vintage objects. Chris saw the cassette tapes and the Apple computer and mused out loud, “Stuff we had when we were younger is so old now that it’s in a museum.” So that’s great. 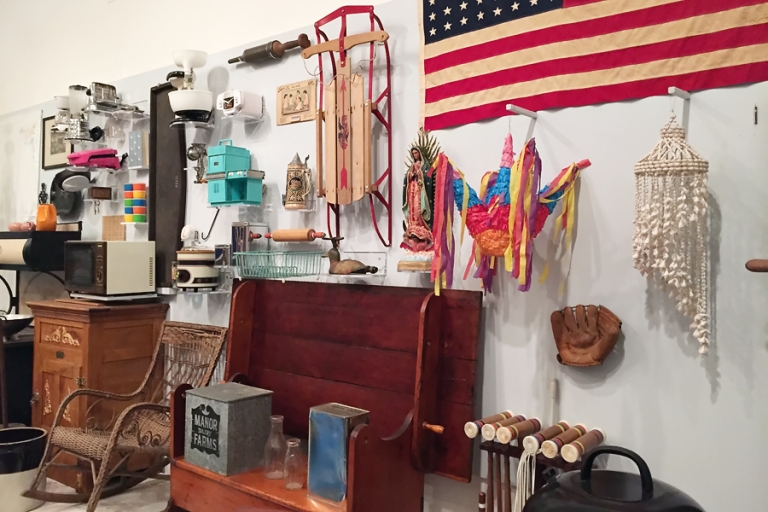 We may have misunderstood the exhibitions-are-free-after-4pm thing, because we let ourselves into the Scaling Washington exhibition next. The website clarifies that only House & Home is free after 4pm on weekdays; reduced admission is available for the museum’s other exhibitions. Oops! (We ended up paying for a ticket anyway though – more on that shortly.) Scaling Washington features the impressive photography of Colin Winterbottom, documenting the post-earthquake restoration of the Washington Monument and Washington National Cathedral. 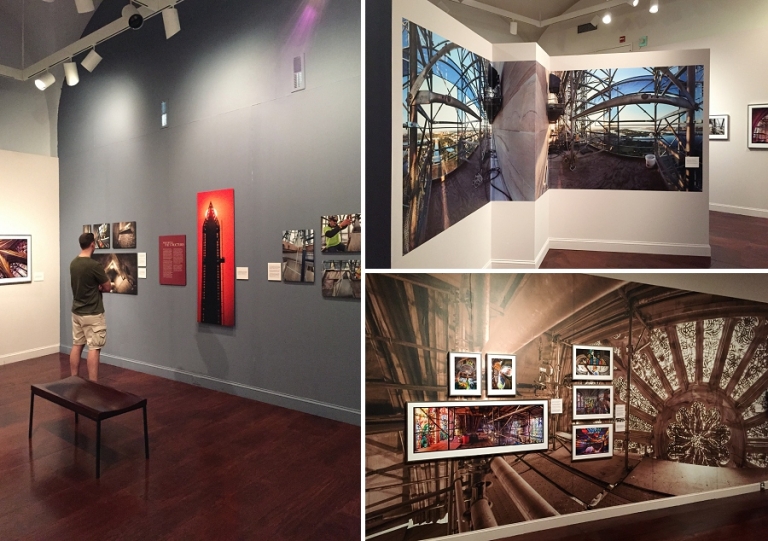 We finished our free tour of the National Building Museum with a visit to the gift shop in which we found books, photos, stationery, apparel, puzzles, games, toys, and kitchen gadgets for the home cook who has everything.

By the time we finished perusing the Great Hall, two exhibitions and the gift shop, the line for The Beach had significantly dwindled down to only a few people, so we decided to see if we could jump into the ball pit for the last 10 minutes before closing time. Lo and behold, the museum’s hours were extended and we had plenty of time to see The Beach! We purchased tickets, which included admission to all of the exhibitions, so we retroactively paid for our accidental foray into Scaling Washington. 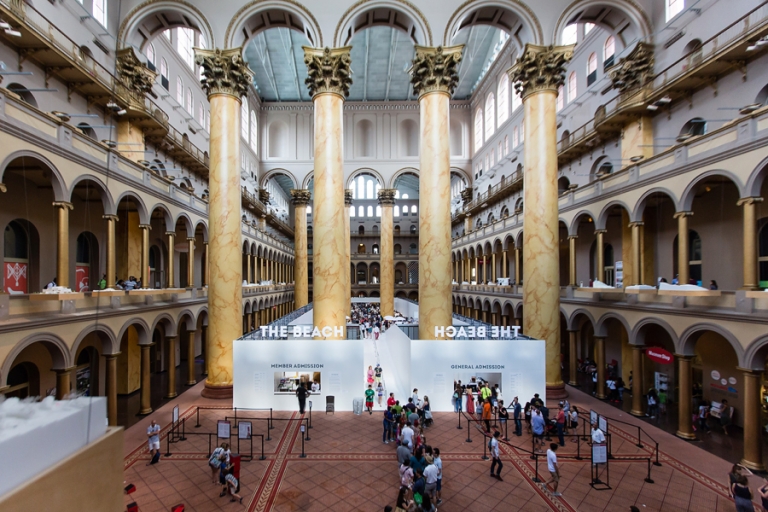 I actually felt conflicted about playing in the ball pit. My first reaction: germs. The ball pit will inevitably be covered in germs. But there’s also the side of me (the kid side) that reminded myself I can’t go through life worried about every little germ, so in I jumped.

And alongside all of my fellow art enthusiasts, I took selfies. And pictures with Chris. And we took pictures of each other. What can I say? It was a weird, once-in-a-lifetime opportunity to take a photo of our heads surrounded by white plastic orbs in the name of art. 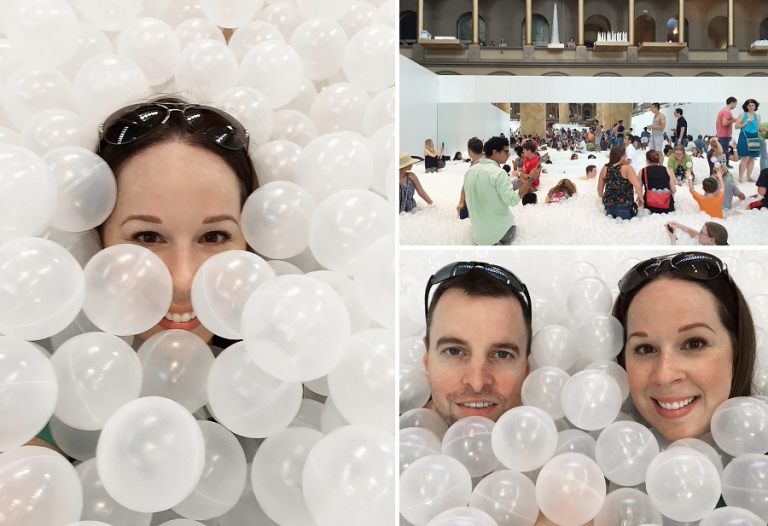 There were moments, though, where it was difficult to appreciate the art – a boy chucked a ball at my head more than once. And as I sank deeper into the seemingly bottomless pit of plastic, (spoiler: it’s about three feet deep) I feared being stepped on, or losing the contents of my camera bag. I did sacrifice a $5 Metro ticket to the ball pit gods. I’d love to see what is uncovered at the bottom once the exhibit is deconstructed and the balls are removed for recycling. 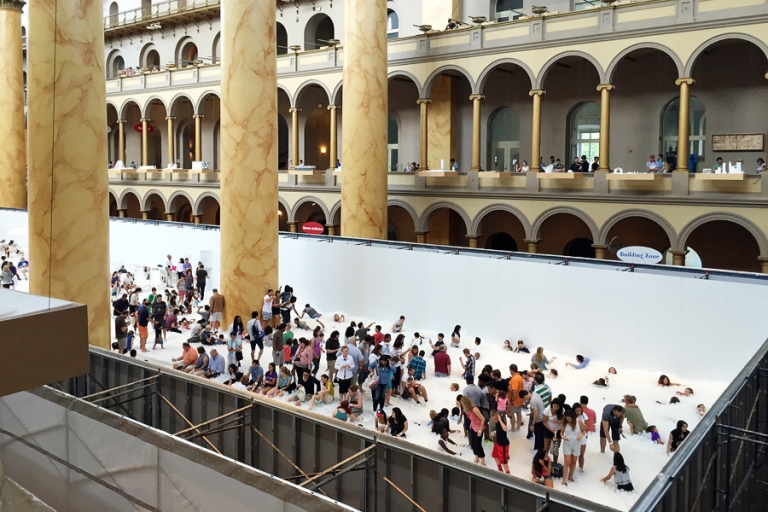 But there was no denying it – despite the crowds and the germs and the fact that I skinned my knee getting out of the pit, The Beach was silly shark-free sunburn-free fun! And art. The Beach is art. 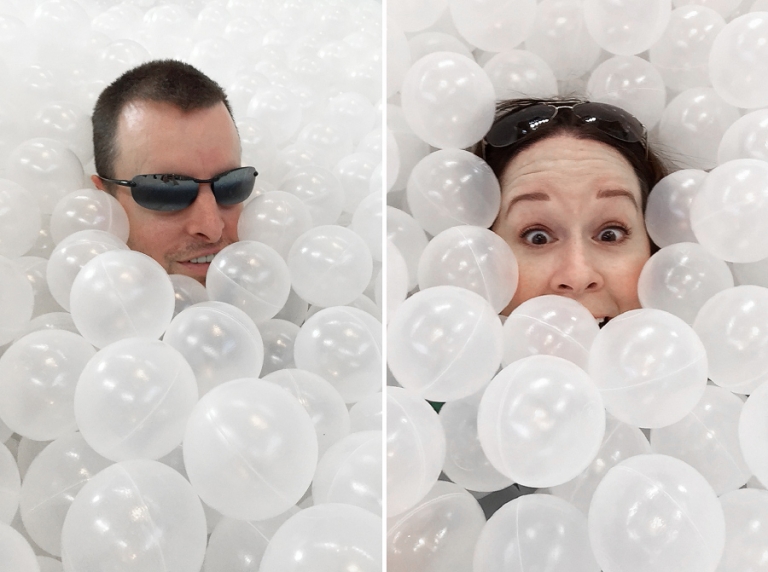 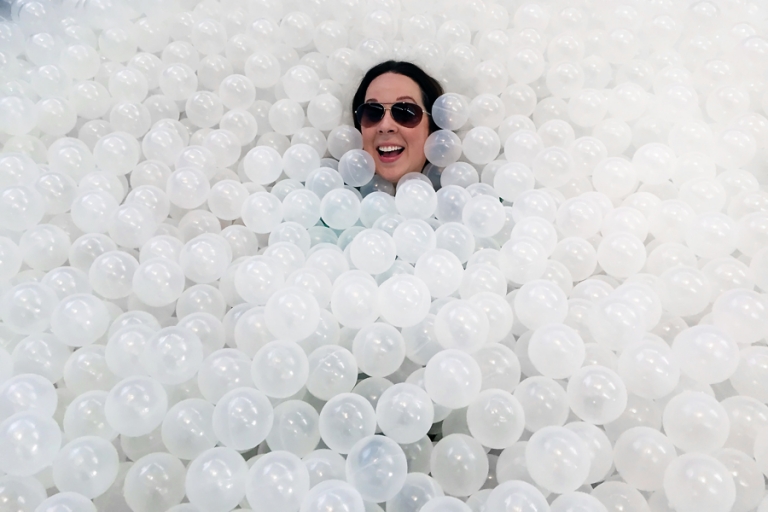