Tourist at Home: The Crime Museum

One of D.C.’s newer museums, the Crime Museum focuses on the history of crime, law enforcement, and forensic science. Chris and I decided to spend a couple of hours there on Saturday afternoon, learning more about the most notorious crimes in history.

Four different admission types offer a customized experience ranging from general/self-guided tours, to audio tours and a family-friendly Top Detective Challenge in which participants answer workbook questions and follow clues to solve a mystery and win a prize. The tour starts on the top floor with the first gallery, A Notorious History of American Crime, dating back to medieval crimes. Then you work your way down three floors moving chronologically through to the Technology of Crime Fighting. The five main multimedia galleries include American History, Punishments, Crime Fighting, Crime Solving, and the America’s Most Wanted studio. Photography is allowed throughout as long as you refrain from using flash. It’s dark in there from beginning to end, so be prepared to use a high ISO and steady your camera if you can! All of my photos are from my point-and-shoot or my iPhone. 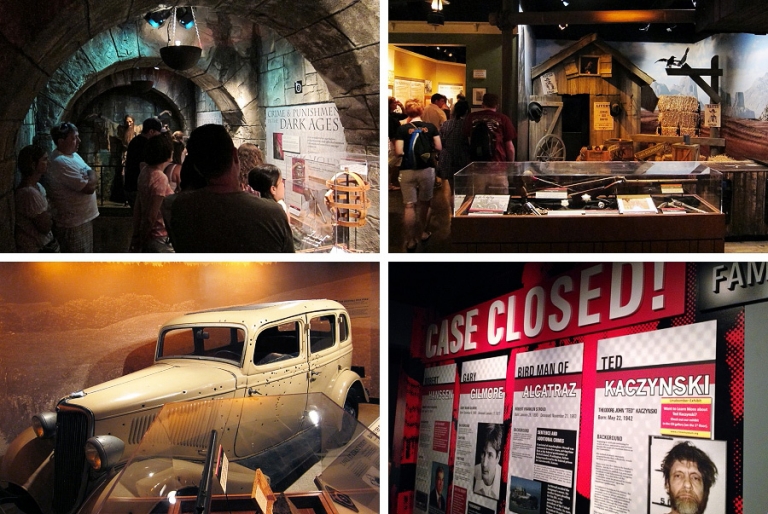 On the subject of families, we did see a few elementary school-aged children and there are stations throughout the museum intended for young kids, but just know that the majority of the museum is dimly-lit so it’s a little spooky in places (there are no windows), and the galleries include artifacts such as weapons of all types, an electric chair, a gas chamber, a guillotine, and various medieval torture devices. There’s also a simulated autopsy that would have creeped me out as a five year-old for sure. I suppose, like anything, it just depends on your child and what he/she can handle, and what kind of conversations you’re ready to have. The middle-school kids and high-schoolers seemed to be enjoying themselves – most were participating in the Challenge.

There are a ton of opportunities for interaction and even photo-ops including a mock lineup, a jail cell with an escape tunnel, a police chase simulator, finger-printing stations, and a body heat sensor camera. Chris and I took advantage of those photo-ops, of course. My apologies for looking so inappropriately happy to have my head and arms locked up in a stock. Or maybe I’m just crazy… 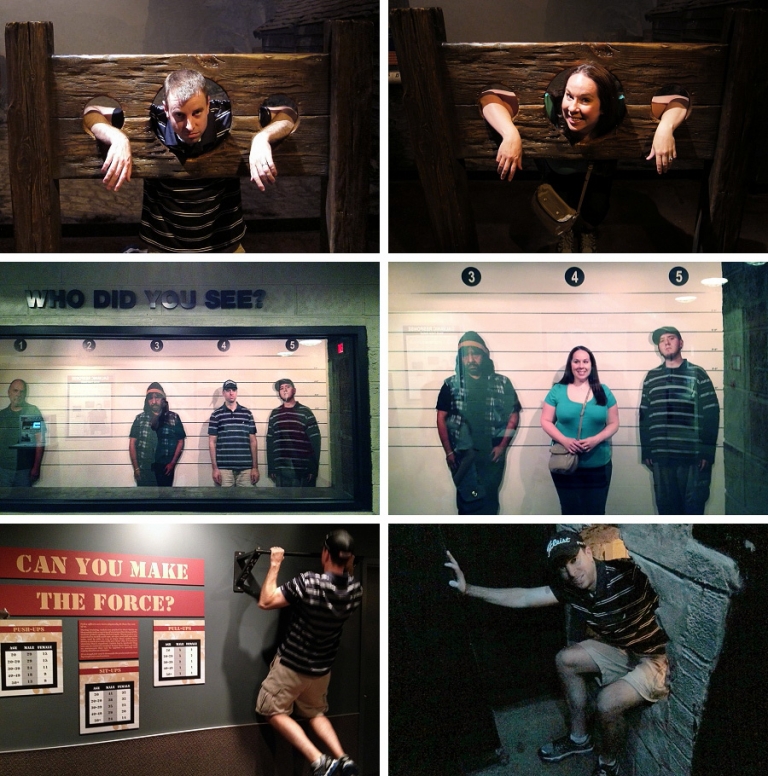 We visited on a high-traffic weekend (Independence Day weekend), and it did feel a little crowded. The galleries on the top floor were especially cramped since the space is smaller. Once we reached the lower floors the crowd thinned out and the galleries were bigger, so it was easier to read the information at each display. I picked the subjects most interesting to me (I had fun trying to guess which Coach bags were fake in the Counterfeit Crimes display) and skimmed the rest, and it took us about two hours to complete our self tour. There’s enough material to fill an entire day or two if you’re super interested in crime history, but for most people I would plan 1-2 hours at least. If you are on a predictable schedule, you can buy tickets in advance online and save some money. The tickets are specific to date and time though, so you do have to know approximately what time you want to visit.

Just a funny side note, keep an eye out for typos throughout the museum – there are quite a few! Chris noticed this Glock 22 mistake (there shouldn’t be a dot/period in front of the 22 since it’s a model number, not a caliber) and I wanted to grab a red pen in the forensics room because that’s not how you spell autopsy – oops! They opened in 2008, so maybe they’re still working out the details?!

Chris and I both enjoyed the museum and found the material fascinating. I would compare the Crime Museum to the Spy Museum in size, tone, and price, although when we went to the Spy Museum they didn’t allow photography! Sad face. (They have since modified that policy to allow photography in certain areas.) And the Crime Museum has a lot more interactivity. As far as the layout of the Crime Museum goes, I think I might have been spoiled at the Newseum. The Crime Museum layout felt a little cramped and sometimes it was difficult to read the placards at each station due to the volume of people, whereas the Newseum was spread out over a huge floorplan. But I definitely recommend a visit to the museum to learn a bit more about crime and punishment throughout the ages. It would be a fun way to spend a few hours beating the heat (or the cold), and since it’s near the Chinatown/Gallery Place Metro stop, there are tons of great places to eat nearby.