Chris and I didn’t end up going geocaching this weekend. We actually got on a huge organizing kick, and ended up doing some early spring cleaning. We filled about 6 huge trash bags with clothes and household items to donate, and we organized our storage room by putting things into nice bins and labeling everything.

And then last night we went to the Angels and Airwaves concert at the 9:30 Club in DC. The show was amazing! Chris and I got there early enough to have our choice of where to stand. We were originally down on the floor about 5 people deep from the stage, but we ended up snagging a spot upstairs against the balcony. I’m so glad Chris suggested that, because the kids on the floor where we were standing were big into moshing and crowd surfing. It was fun to watch them from above at a safe distance. Tom DeLonge’s energy on stage was infectious, so much so that the guy standing next to me was nearly having a spiritual experience. He was so excited. I’ve never seen someone so into a band before – he moved to every single note, and knew every single word to all of the songs.

No cameras were allowed, but I did take a quick picture with my Blackberry (in the dark, while people were bumping into me, so please don’t hold me accountable for the quality!): 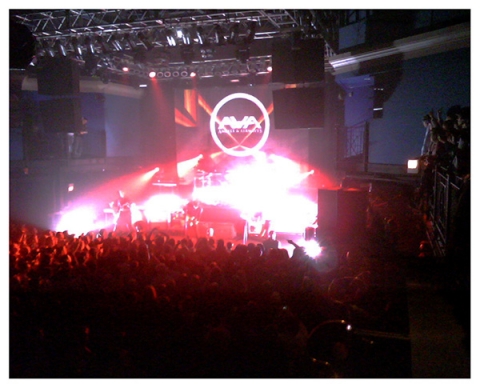