One of my favorite highlights on our trip to Alaska was the rainforest canopy tour with Alaska Canopy Adventures. We booked this excursion outside of Celebrity, and decided to do the Ultimate Canopy & Zipline Expedition in Juneau since it worked best with our schedule. At the time of booking, this tour was $179 per person, and the tour lasted a little over three hours. It was super easy to book and the customer service was outstanding. I had a few questions before booking and I received prompt, helpful answers. The tour was on time as well, which was critical since we had another excursion planned later in the afternoon.

We met a boat at the dock near where our ship was in port and we crossed the water to land on Douglas Island. Once we arrived at the base camp, we were outfitted with harnesses, helmets, and gloves, not only for safety, but also for looking awesome. 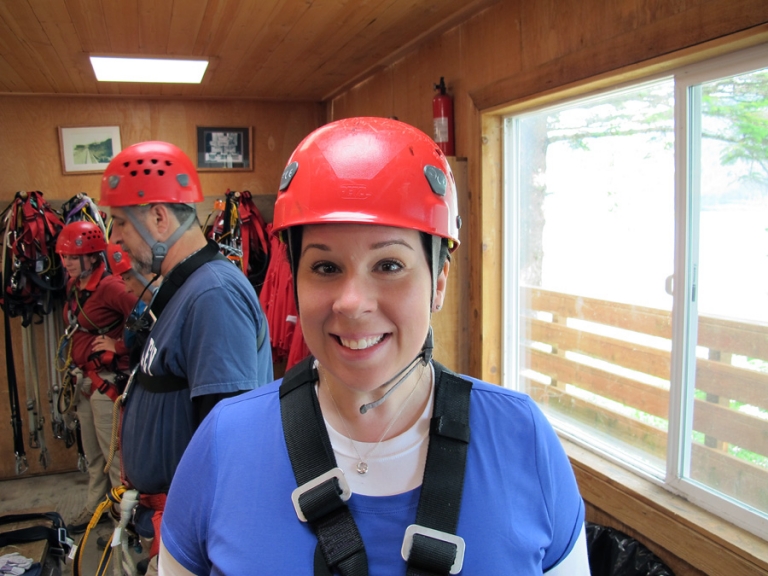 All of the equipment was in great condition, and there were several staff members to help get all of us harnessed up. A van ride up the mountain took us to the beginning of the zipline series, and during the ride we were treated to the history of the area and breathtaking views of the island.

The first zipline was a short, practice line close to the ground where we learned how to ride and most importantly, how to brake. There was a bit of timing involved – we just had to brake a few yards from the end of the line so we didn’t slam into the guide waiting to catch us. It wasn’t difficult to learn though. And our guides were so much fun – they were hilarious, but also very safety-conscious and they made sure we were always having fun and feeling comfortable. At the time of our tour, photography was permitted, but I only took photos while on the platforms and not during an actual zipline. I didn’t trust myself to hold tight onto the camera AND be able to break on time. It’s better just to enjoy the ride anyway! 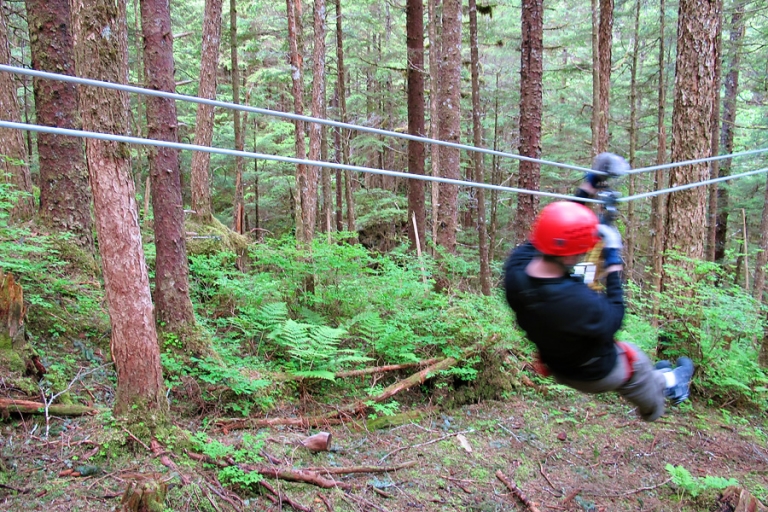 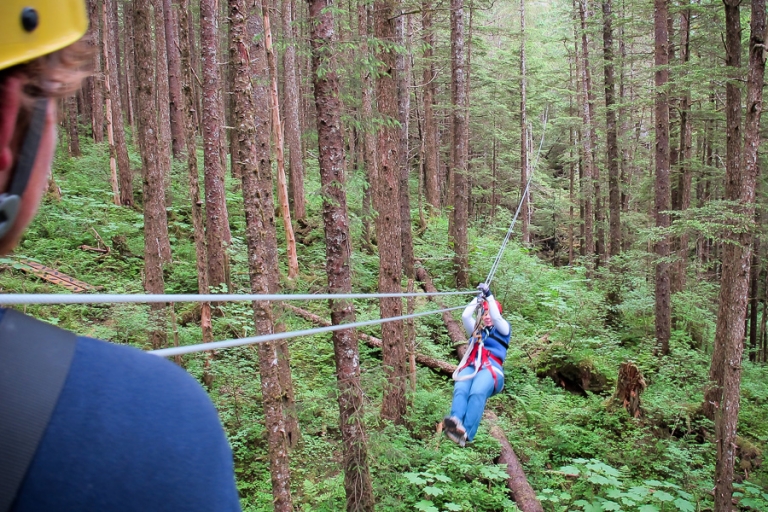 In addition to the ten ziplines, we had fun on these swingy suspension bridges, high up in the air. Don’t worry, you’re carabinered into the system and it’s very safe. And it was a nice opportunity to really look around at the lush rainforest canopy surrounding us. How about a fairly unflattering photo of me standing on the bridge? Here you go!

Our guide offered photos at a different angle in which he jumped over the side of the bridge and suspended himself alongside us. Nerves of steel! And that just shows how much you can trust the harnesses. 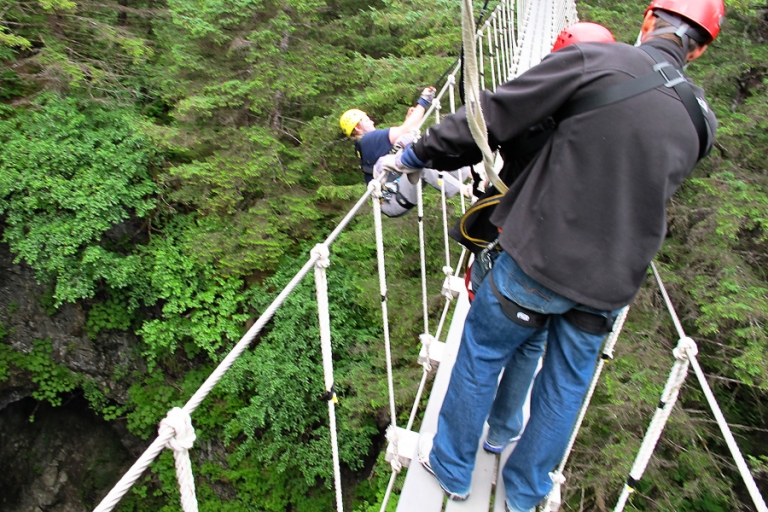 At the end of the tour, we rappelled down off of the last platform, which was so fun! I went first even though I had never rappelled before so I didn’t know what to do. It was a little eerie sitting down over the edge of the platform just into the air, but once I felt the harness catch and support me, I had a blast scooting through the air down the line. 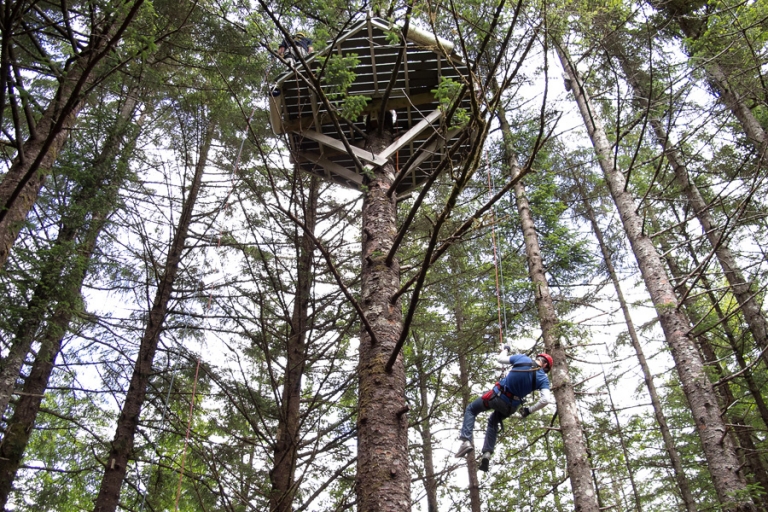 We were awarded medals for completing the course, which I am proudly wearing here with our awesome guides. 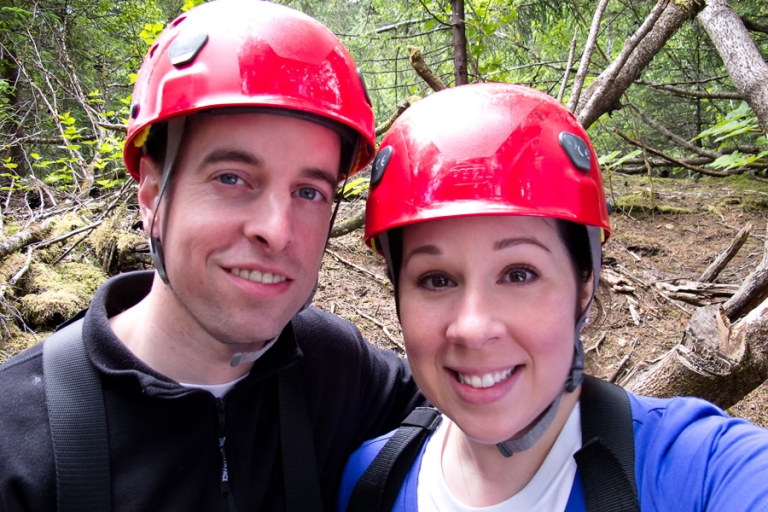 I highly recommend Alaska Canopy Adventures if you’re planning to visit Juneau! We had such a fun time with them and would love to do it again sometime.