A Very Musical Weekend in NYC

Every time I travel to Europe I feel a little pang of jealousy over how easy it is for Europeans to cross over into a new country with simply a short flight, train ride, or even an easy road trip. But then I remember we have a similar ability here in the U.S. with traveling to different states and we really don’t take advantage of it enough! So when I was fiiiiiinally able to get tickets to see Hamilton on Broadway, Chris and I decided we would make a New York City weekend of it. We took the Amtrak train up on Saturday of Columbus Day weekend and stayed until Monday afternoon. Here’s what we did with our 48 hours in the Big Apple. 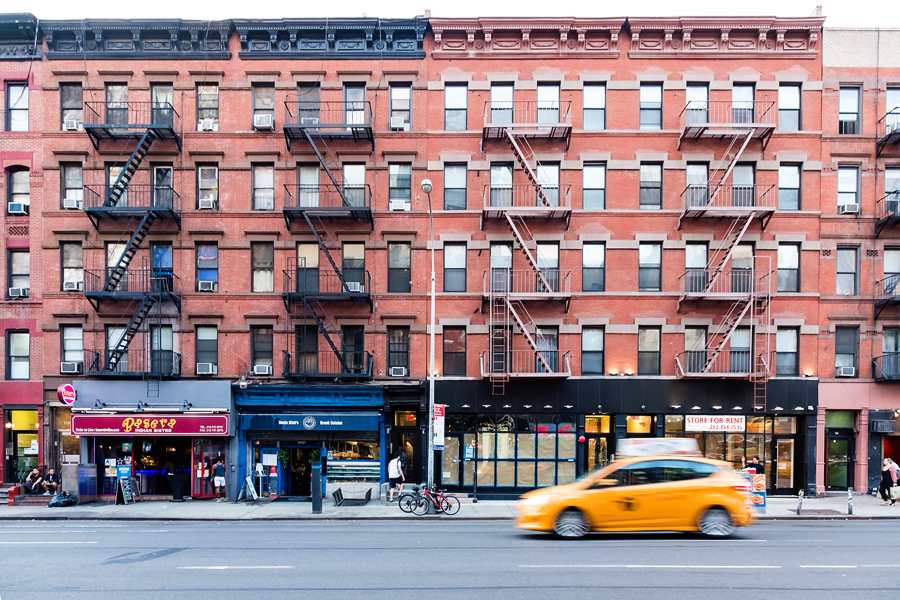 Because we were only planning to stay for two days/nights and planned to see two shows, we wanted to consolidate our time as much as possible and stay in midtown near the theatres. We found that citizenM, a quirky and stylish boutique hotel right in the middle of the Theatre District, fit the bill perfectly. I highly recommend it as the perfect place to stay for a theatre weekend, with a caveat… 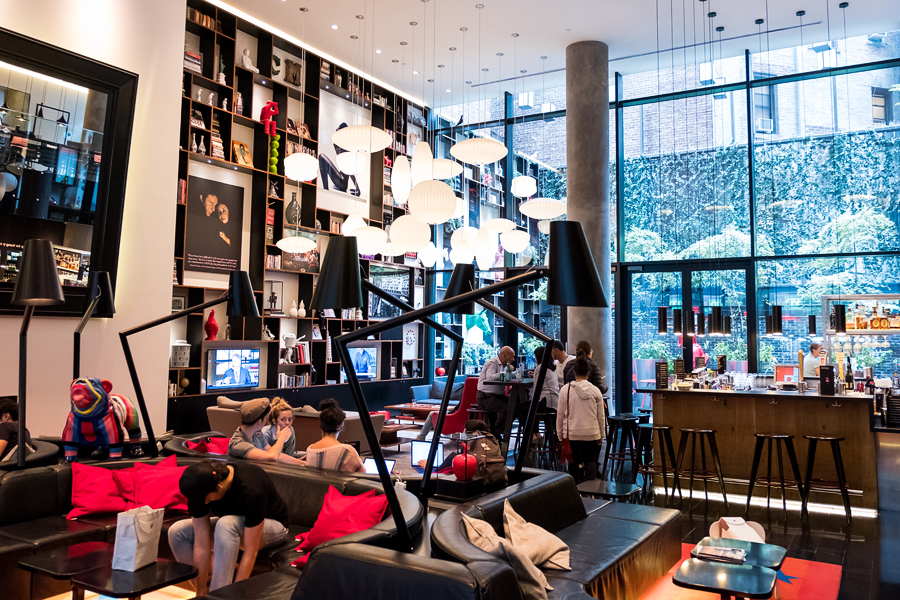 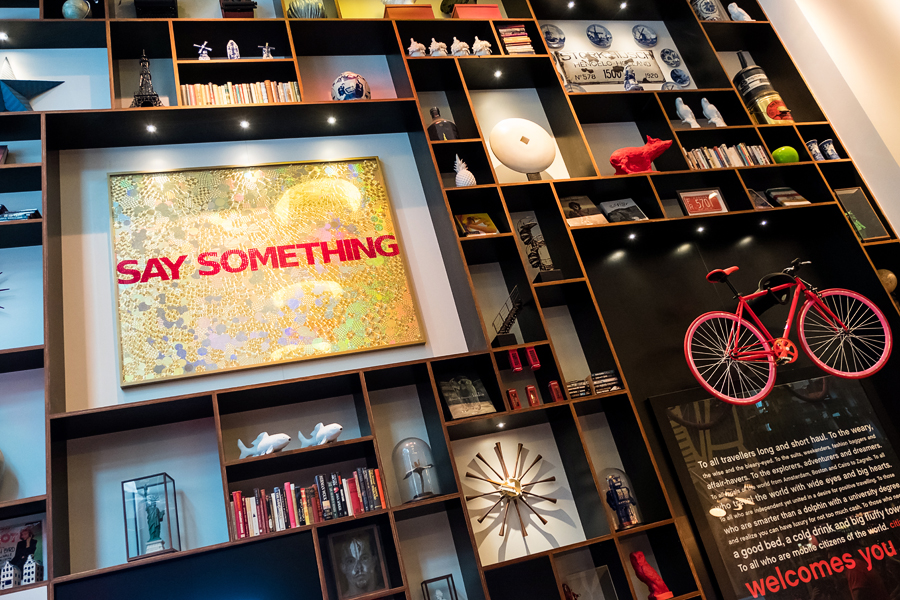 …the rooms are some of the smallest you’ll ever stay in! We knew this going in though, and we didn’t plan on spending much time in the room anyway, so we liked the value of citizenM for the location. The smart design made the room feel bigger than we expected, and we had exactly enough space. I recommend the hotel for either solo travelers or for staying with someone you don’t mind sharing close quarters with and if you’re both okay having a little less privacy than usual. For example, this hotel room wouldn’t work for those couples on House Hunters who vehemently require double sinks.

A king-size bed touches wall-to-wall-to-wall and takes up about half of the square footage. Thankfully it’s a great quality bed and quite comfy. We liked the cozy feeling of the bed nook with a flat-screen TV on the wall. I was also super impressed with the maximized storage capabilities in such a compact space. We each had a small closet for our clothes, plus a giant drawer under the bed. The vanity had lots of shelves for toiletries and such.

The bathroom is comprised of a pod with a shower that somehow felt way more spacious than some tub showers (you know the one with the annoying curtain that always sticks to you?) plus a toilet, and then the sink is on a slim vanity outside of the pod. 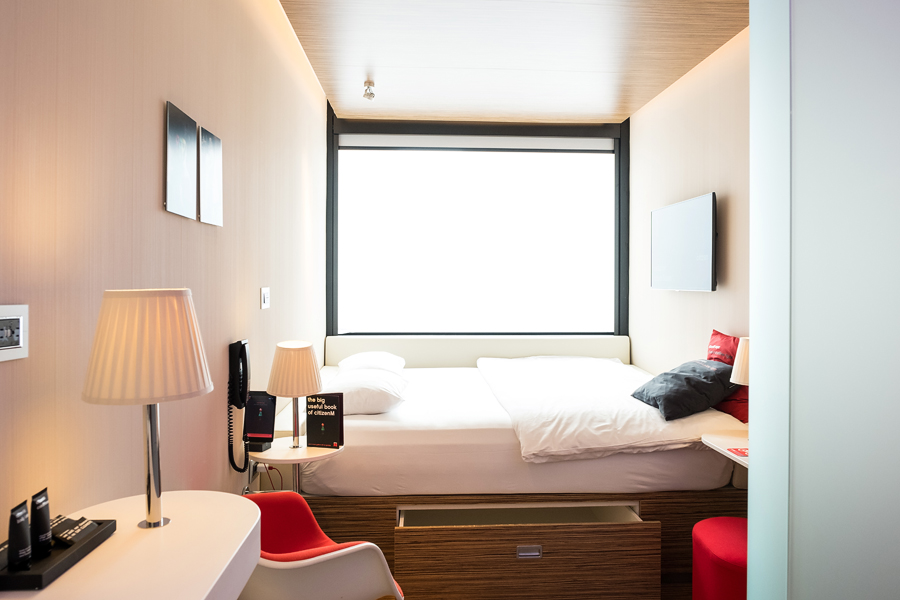 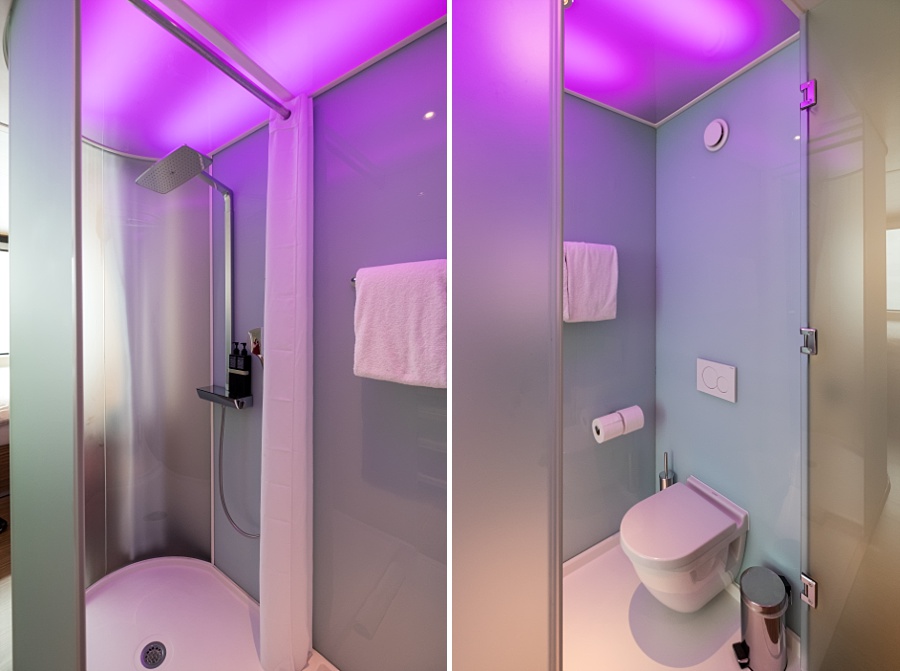 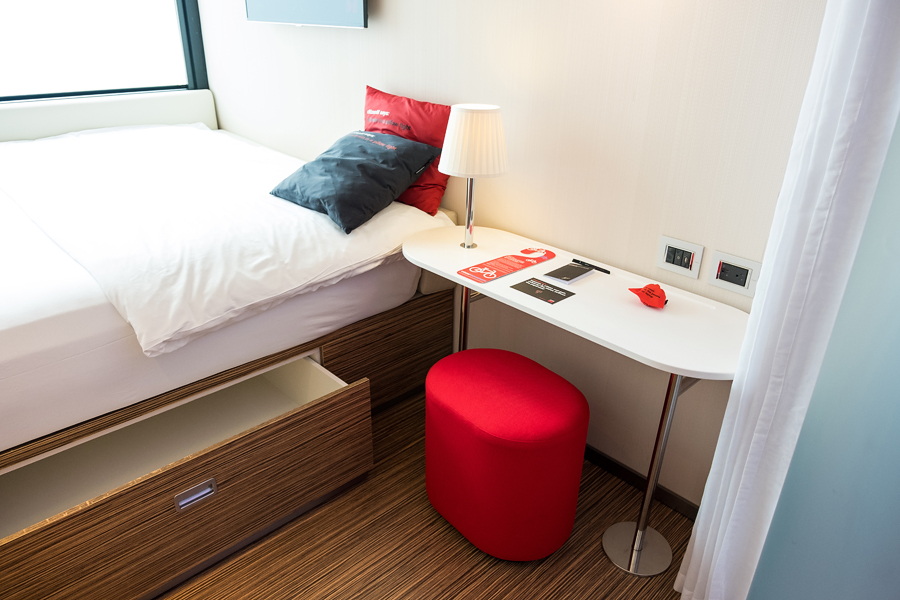 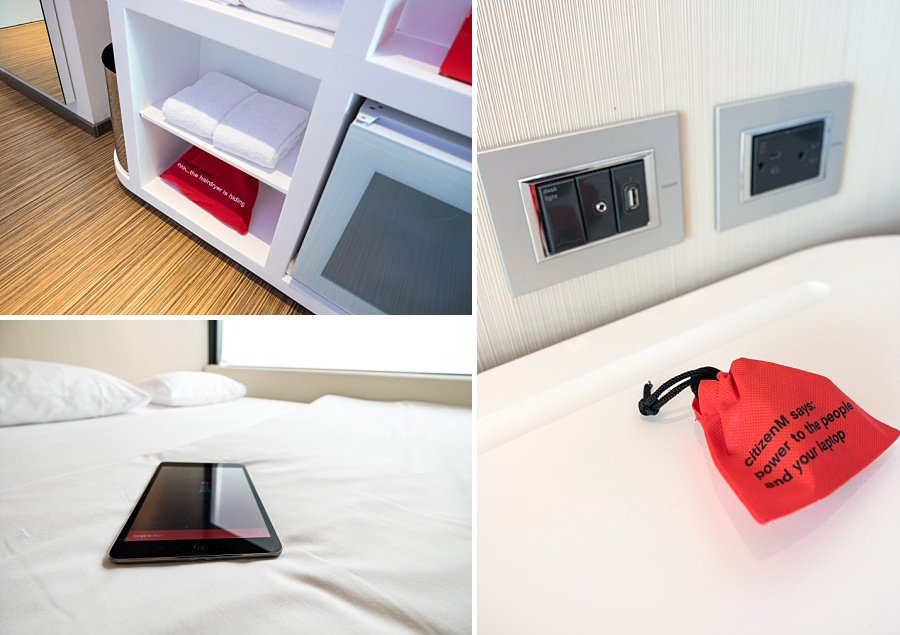 An iPad controls everything in the room including the TV, the thermostat, and the lights, with options for mood lighting. The room was really clean and surprisingly quiet considering our location. We had everything we needed, and as a bonus we got a good chuckle out of reading all the funny sayings on the various signs and amenities throughout the hotel. These pillows and this hairdryer, for example: 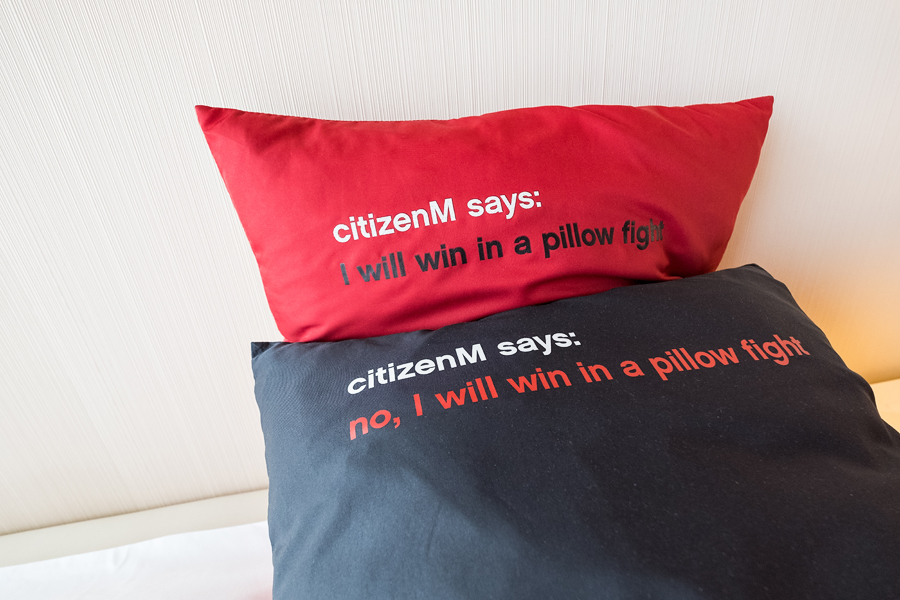 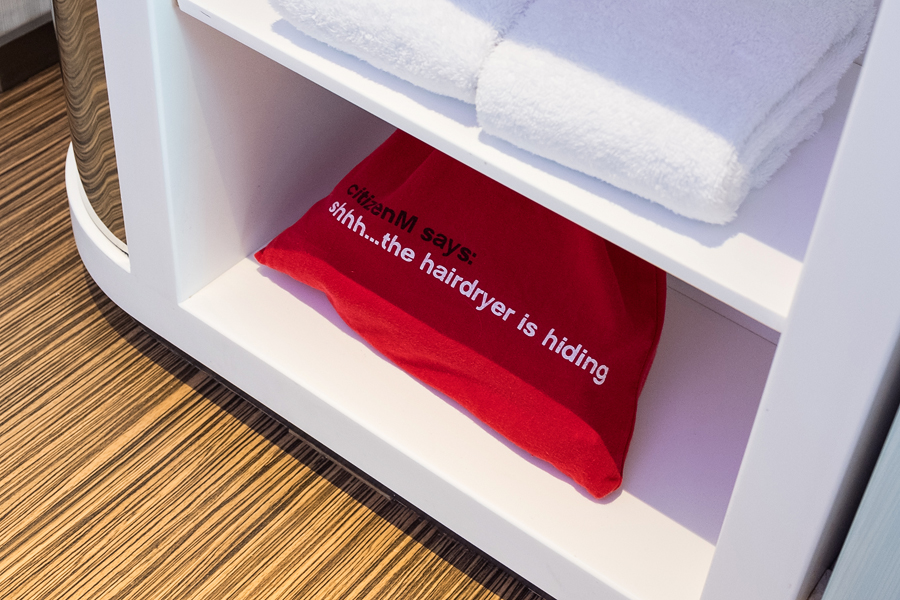 Most importantly, the hotel was situated steps from all of the theatres, some great restaurants, and the 50th Street subway station for easy access to other neighborhoods. We loved it, and we’ll definitely stay there again! 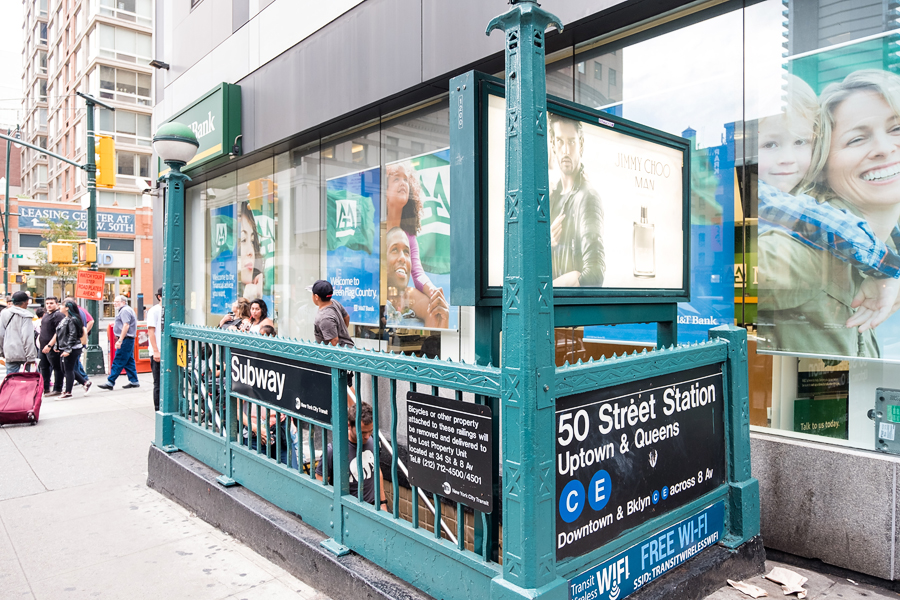 Chris and I might be the only people who had never listened to the Hamilton soundtrack before this past weekend. I specifically held off because I wanted to be completely surprised at the show. Now that I’ve seen it, I’m obsessed and I haven’t stopped listening to the soundtrack! I’m even listening to it right now as I’m writing this post. I’m in awe of Alexander Hamilton’s story, but also of the creator’s story. Lin-Manuel Miranda was inspired by reading a biography of the founding father while on vacation, and turned that inspiration into an award-winning Broadway musical phenomenon. I need to start bringing more substantial books with me on travel. 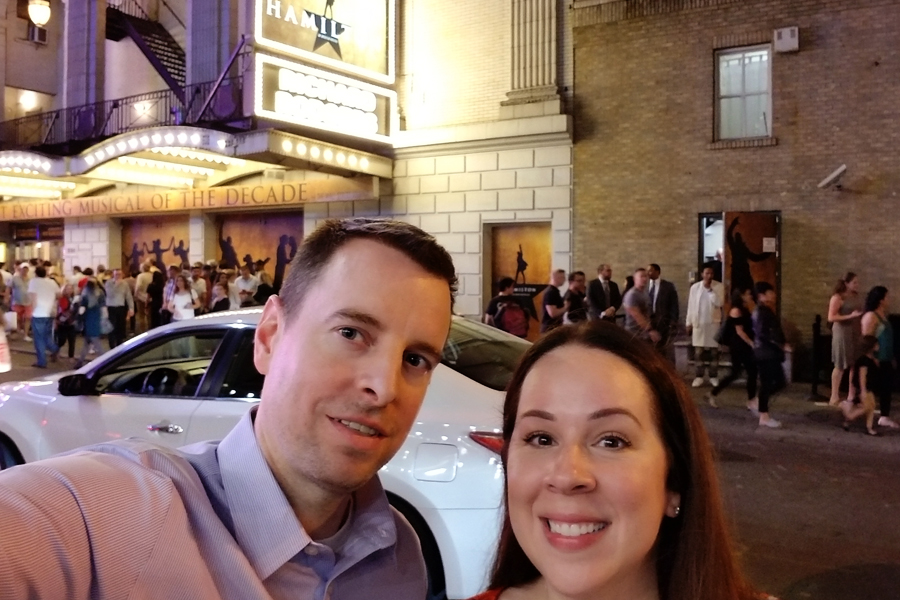 We saw Hamilton on Saturday night, and we originally planned to spend most of Sunday exploring some of Manhattan including Central Park, but the weather had other plans. Waking up to a soggy forecast that day prompted us to figure out indoor plans, and I presented my case to Chris in favor of seeing another another show. He agreed to see Charlie and the Chocolate Factory with me, based on one of my all-time favorite children’s books.

We were treated to seeing the original Broadway cast, and while I’ve read some fairly critical reviews of this production, I have a biased soft-spot for the beloved story from my childhood and it was all good fun for me. Plus I was happy to be out of the rain. 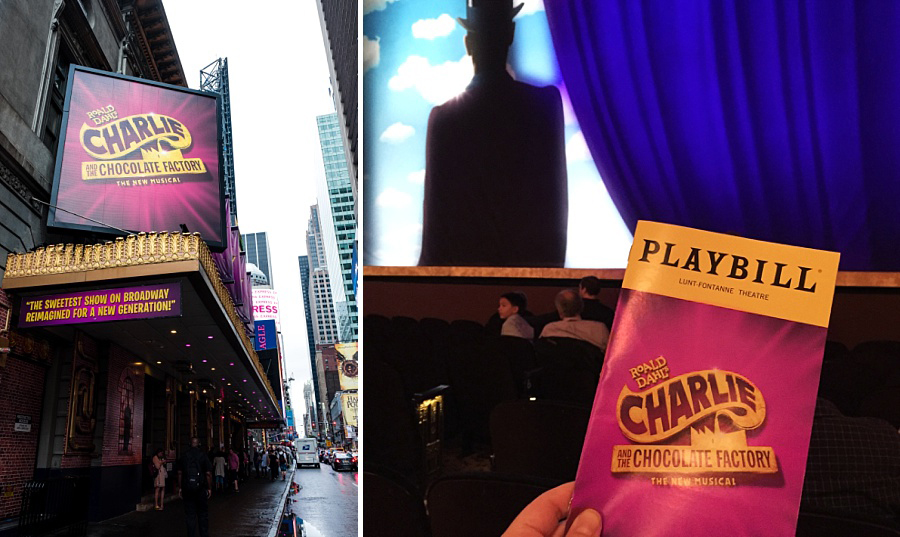 Also from the change-of-plans files, we had originally purchased tickets for the new Groundhog Day musical, but we were notified in August that the show was cancelled. I already had my heart on seeing two shows (before I knew we’d end up seeing three), so we decided to see School of Rock instead and I’m so glad we did. I was blown away! The cast includes a dozen or so kids who actually play instruments live on stage. The show is incredibly fun with a brilliant score and we thoroughly enjoyed it. If you’re a fan of the movie, definitely don’t miss the musical. 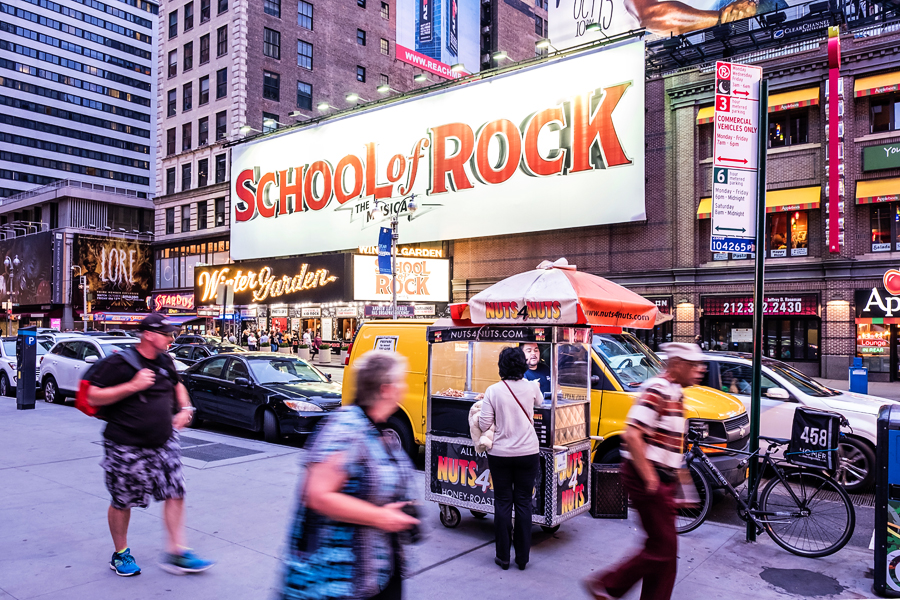 Before leaving for New York I found this article with a recommendation for Danji in Hell’s Kitchen, which happened to be only a few minutes’ walk from the citizenM. We made reservations here for our Hamilton evening and took dish recommendations straight from the article along with our own selections from the cocktail menu, and we loved every single bite (understatement). Bulgogi beef sliders, Korean fried chicken wings, and the bacon wet fried rice – I swooned over all three dishes. I desperately wish this restaurant would open a D.C. location. 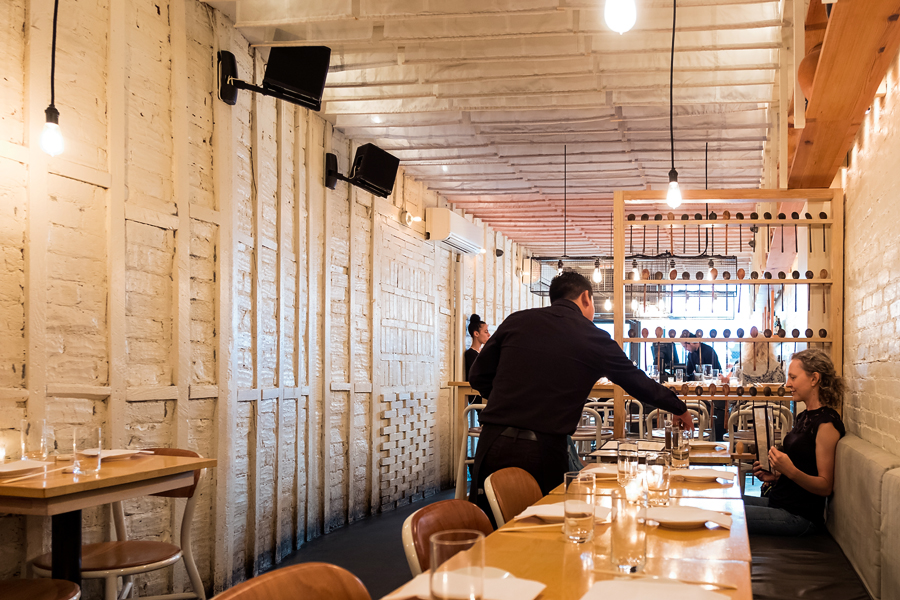 We had a seat in the back away from good window lighting and I was way too excited about eating to take my time at all with composition, so I hope you’ll pardon my lazy food photography. 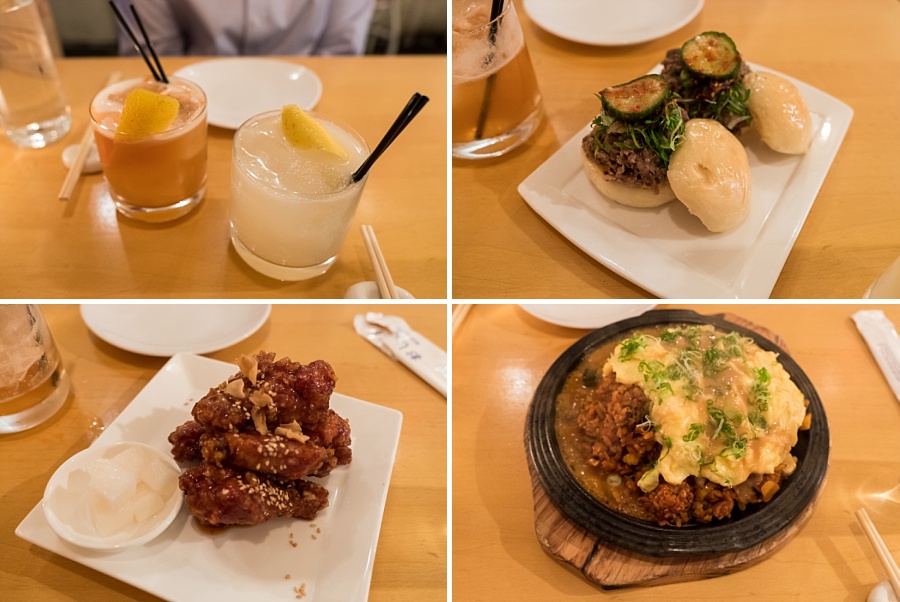 As for sweets, we decided to try Schmackery’s (also in Hell’s Kitchen) and once I saw the line out the door I knew we were in for something good. We went with a Halloween candy-covered cookie as well as a Funfetti one. We inhaled one of the giant soft and gooey cookies before the show and saved the second for a delicious intermission snack during Hamilton. This is another New York gem that I’d like to transplant to D.C., please. 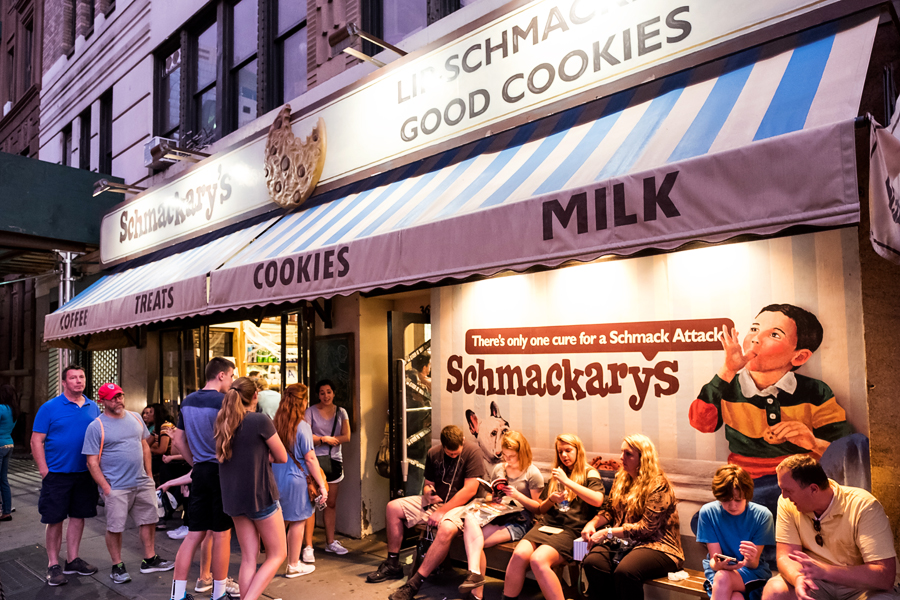 On our second night we simply walked out of our hotel and crossed the street to Toloache. This spot satisfied our Mexican food craving before we saw School of Rock, which was also just one block away. You really can’t beat the proximity factor, and we especially loved having plenty of time to indulge in several courses and multiple pre-show margaritas. 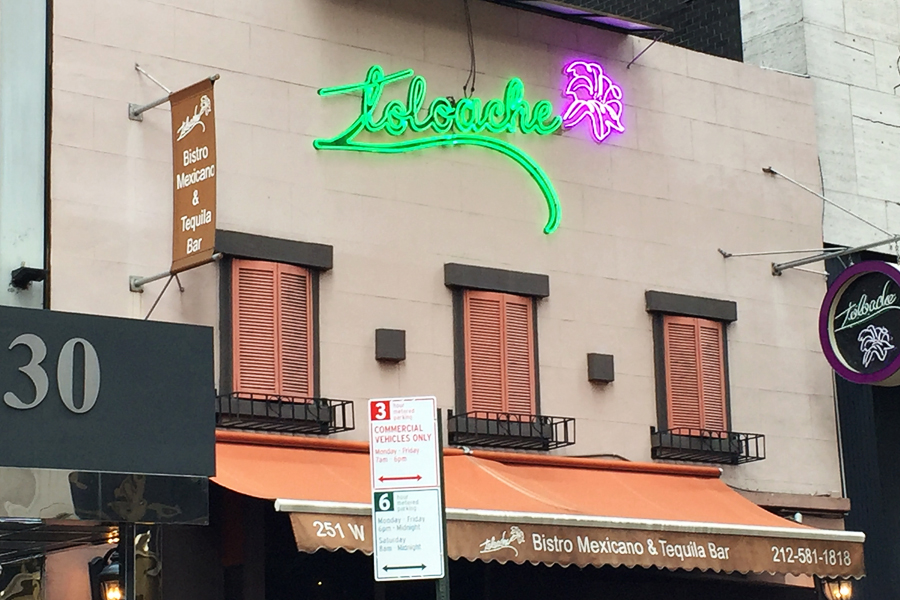 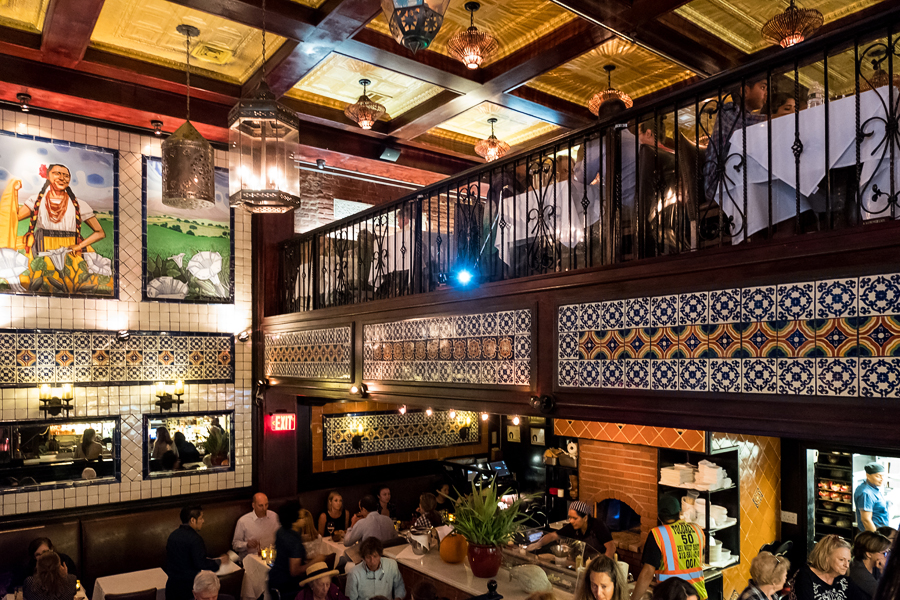 Speaking of multiple margaritas, I completely forgot to take a photo of our enchiladas main dish, owing to that buzzed factor that makes you devour whatever is put in front of you…you know the feeling, right? We dug into the dish before I remembered to document it. But I did manage to grab my iPhone for snaps of our queso fundido con chorizo (oh gosh, I could just cry thinking about how good that was and that I might not get to eat it again for a long while), carne asada tacos, and churros for dessert. 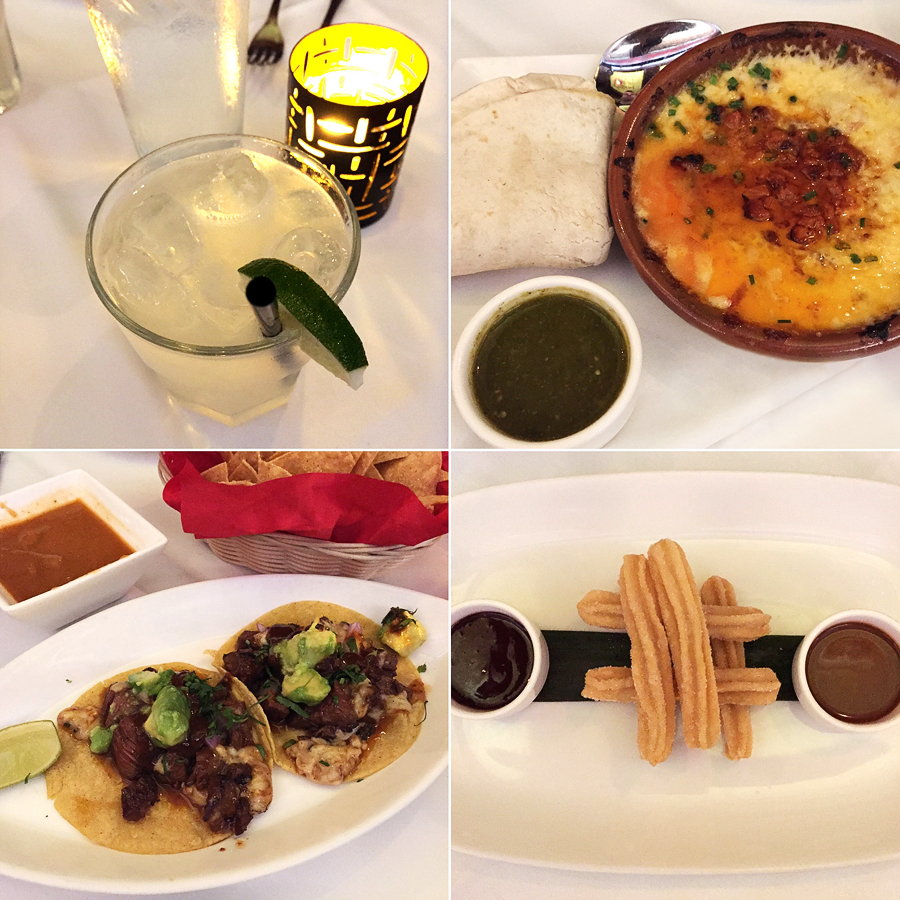 And I don’t know if it’s a cliché or a New York must-do, but Chris and I figured either way we probably needed to eat bagels and pizza while we were in the city. Bring on any excuse/reason to eat bread and cheese, please. I had a few options picked out depending on our schedule, but the dreary rainy weather and lack of rain jackets or umbrellas prompted us to stumble out onto 50th Street and go with whatever was closest. We ate breakfast at Pick-a-Bagel on 8th, and for lunch we grabbed a slice at Gotham Pizza. New York City classics…check and check! 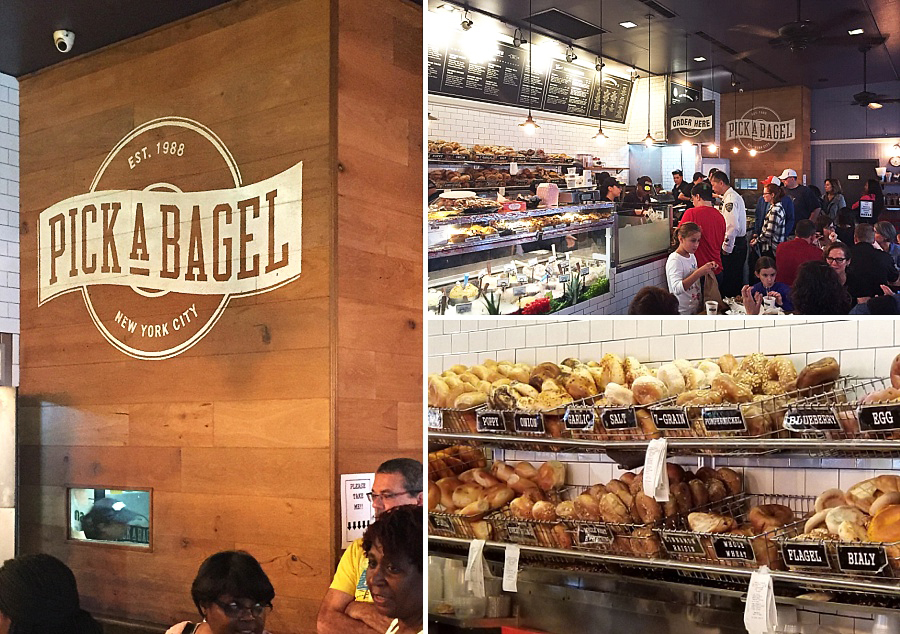 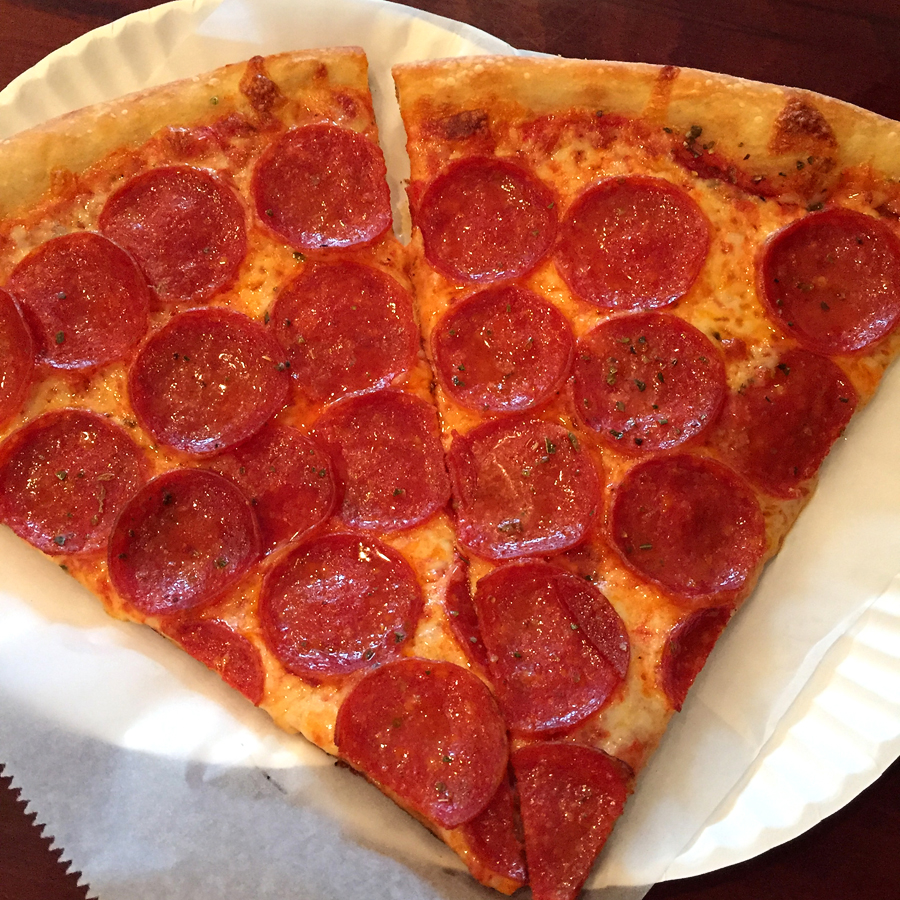 Last but not at all least, I couldn’t pass up the opportunity to bring home some cupcakes home from Magnolia Bakery. The first time we tried the famous baked treats was actually in Dubai earlier this year, but I figured we should go back to the original location for the sake of research. Conclusion: yum overseas, yum stateside. (Although…I have to admit, I loved Miss Cupcakes in Lima, Peru more.)

The rain only seemed to happen during the daytime, so we were able to explore a bit at night after the shows. On our first night we popped over to Times Square along with a few thousand other night owls, and I got to see the Harry Potter and the Cursed Child billboards. 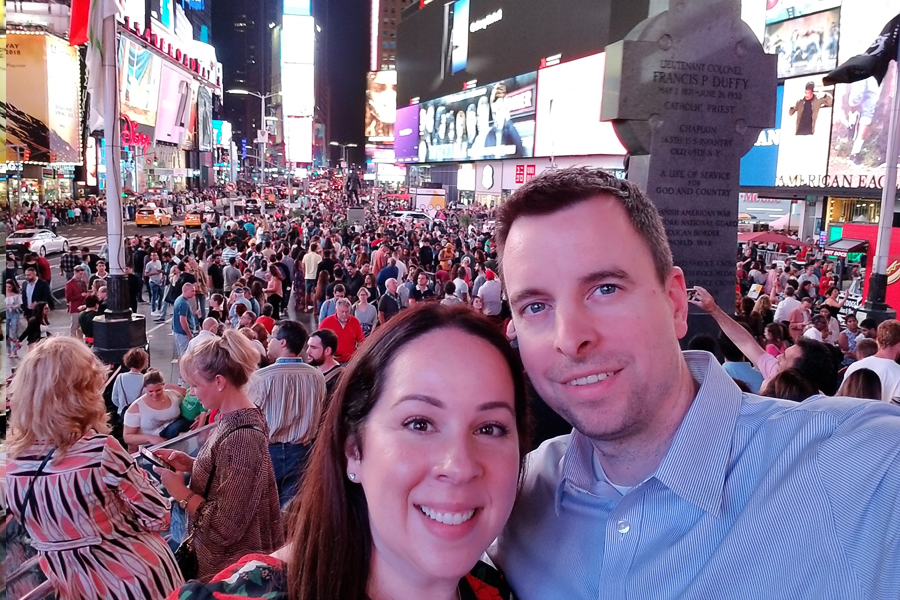 And then on Sunday we wandered around Radio City Music Hall and went up to the Top of the Rock for a view of the city twinkling in the night sky.

In the interest of full disclosure, I’ll admit that I got a little cranky on the Observation Deck. We had to wait in line for quite a while and it was more crowded at the top and waaay hotter outside than I expected it to be at 11pm in October. Hot + tired and in crowded places isn’t a great combination for me. Luckily I wasn’t also hungry – that’s my trifecta of crankiness.

So I’ll recommend to you, dear readers, that you purchase your Top of the Rock tickets online in advance if possible (we just weren’t sure when we’d go) so you can at least avoid the annoyance of standing in a long line, which is apparently long even fairly late in the evening. I’m happy we went though – I love nighttime photography. 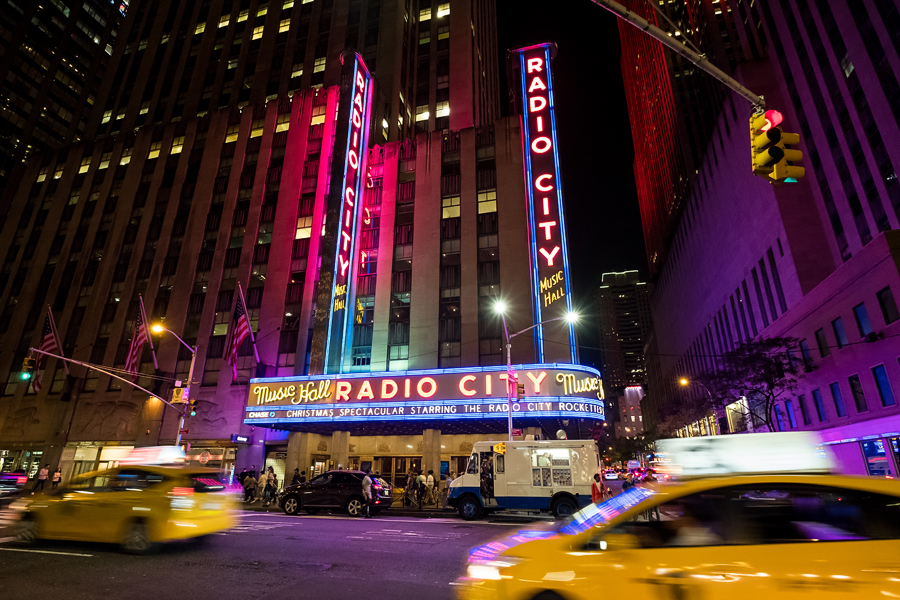 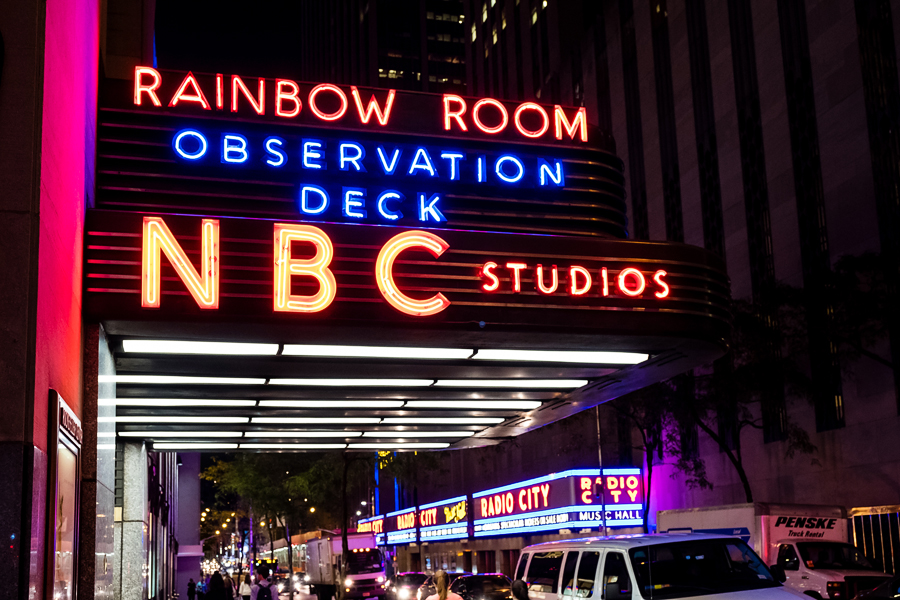 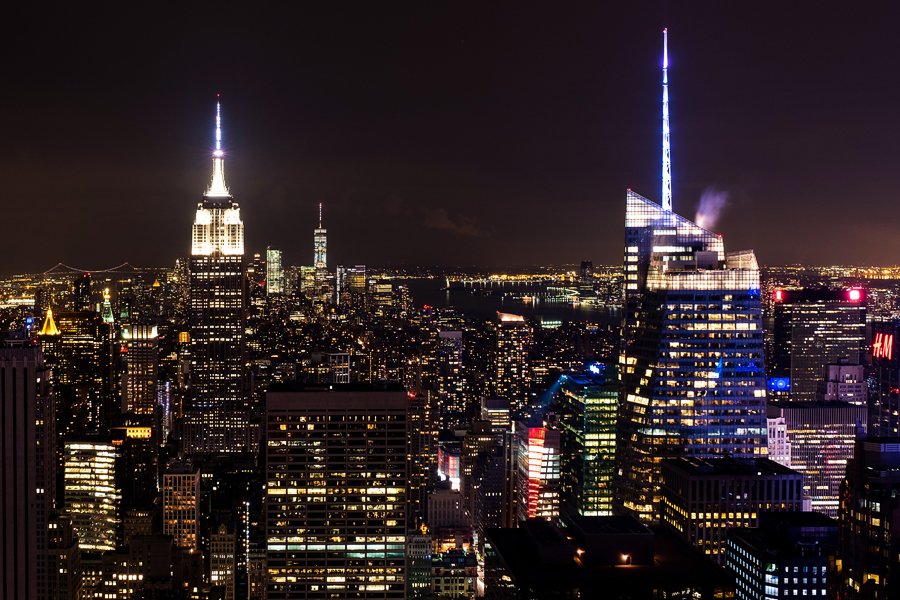 Monday morning we slept in (another rainy day didn’t inspire us to hustle much), packed our things, and returned to Penn Station for an afternoon train ride back home. I probably don’t need to point out that we only scratched the very surface of the City That Never Sleeps. There are countless iconic landmarks to see so I’m not even sure how many days it would take to feel like we thoroughly experienced New York, but I suppose that’s the case with most places.

I loved our weekend of musicals and good eats though, and I’m looking forward to the next time we take advantage of our proximity to one of the greatest cities in the world!