My parents have kept track of the states that they have visited in the U.S. and they only need to visit a few more in order to complete the whole set. I was curious to see how many I’ve been to as well, so I sat down and listed them out. (Side note: I can recite the fifty states in alphabetical order. It’s not a very exciting party trick, but I can do it.) And then being the visual person I am, I decided to create a graphic. The states I’ve been to are shaded in green: 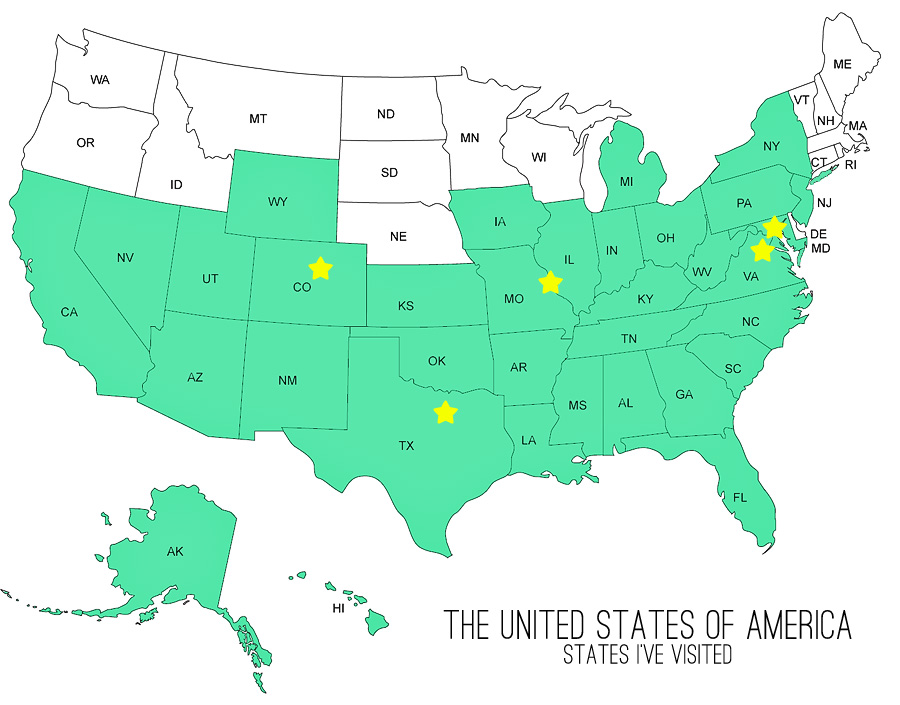 Based on that image, I realized I am sorely lacking in the northern-most part of our country! (Hence the title of this post, a play on this quote if you weren’t sure.) I do like the fact that it looks like the country is a container that I’ve purposely filled over half way with liquid from bottom-to-top. Several of the states I’ve visited multiple times, and I’ve even lived in five (yellow stars). My parents took me on many a road trip in my youth, from the time I was an easy-going infant (so I’m told) up through my sullen teen years and even my twenties. Yes, I was a super moody teenager with a bad attitude that probably made me an unpleasant travel companion at times. I have since apologized to my poor parents! But now looking back, I’m so appreciative of the times that they drove me around even when I wasn’t visibly thankful because I had the opportunity to see so much of this beautiful country. Some of our travel routes included stretches like Denver, Colorado to St. Louis, Missouri (Kansas is a loooooong state) and Plano, Texas all the way to Orlando, Florida.

My favorite road tripping memories are of seeing the vastness of the Grand Canyon, magically standing in four states at the same time at Four Corners, and riding practically every ride at Disneyland and Disney World. I’ve been inside the St. Louis arch and can tell you that it does NOT tip you upside down on your head on the way back down even though that’s how it looks to a four year-old. I can’t even begin to count how many different capitol buildings’ steps I’ve climbed. I love that my dad always stopped to take photos of us standing next to each state’s Welcome sign (and all the other signs, too), and that my mom usually had a patient answer to the question, “Are we there yet?” We visited major landmarks, historical sites, museums, nature centers, zoos, state parks, aquariums, big cities and tiny towns. We drove as far north as Toronto, Canada and as far south as Tijuana, Mexico. 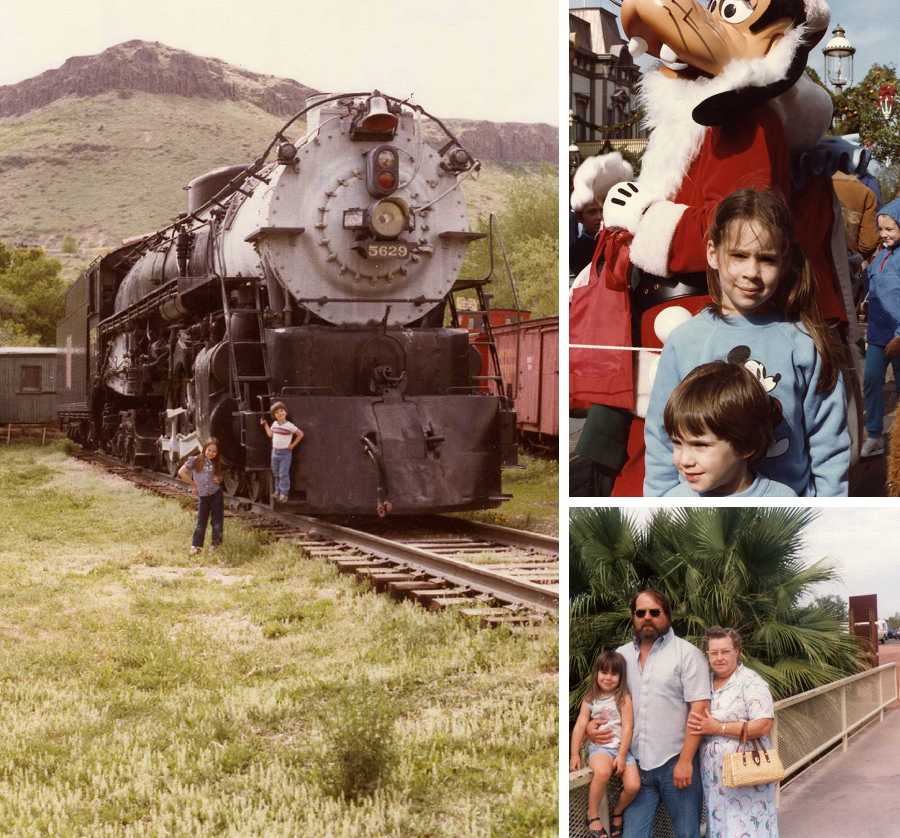 I’ve continued to visit many of the states and have seen some of them for the first time as an adult. I’m pretty sure I never traveled to NYC until 2005, for example. And I landed in Iowa a few years ago to photograph my friend Kim’s wedding! So in order to finish what they started and to cross it off the bucket list, I need to visit about seventeen more states, and there are a few that I’ll revisit since I haven’t covered nearly enough of what there is to see. I’m mad at my twelve year-old self for opting out of the South Dakota trip with my family (I stayed at a friend’s house instead), but at least now I can take my camera and photograph Mount Rushmore properly. Chris and I have talked about making the trek to all of the MLB stadiums, which would help cross off Massachusetts, Minnesota (I’ve been to the airport in Rochester, MN and drove through to Iowa, but I don’t think that counts), and Wisconsin. I’ve always wanted to visit and photograph Maine, we plan to ski in Vermont sometime soon, and we’ve talked about doing a wilderness adventure-type trip to Montana. But we need to come up with a plan for the rest of the states because I’m not sure I know much about them!

Does anyone have good ideas for what else we should go see in the remaining states? What states are on your must-visit list? Let me know!

Also, speaking of maps – check out my brand-new interactive Travel Map! I started linking travel blog posts to the map (red dots) as well as plotting out what’s in the planning queue (yellow dots) and what is officially booked and coming soon (green dots)! Oh and the blue dots are hanging out in a few of my top wish list places. Antarctica, I’m coming for you eventually!