As requested, I’m posting a little clip of my skydiving video from my tandem jump at Skydive Orange!

To set the scene a bit, it was October 2001, just a month after 9/11. We had all been affected by that terrible tragedy in our own ways, and I was in the camp of people who suddenly realized how temporary life truly is. I made a silent vow not to miss out on anything my heart desires in this one short life we’re gifted. And at that time, not unlike today, the dream in my heart was that of adventure! I had been curious about skydiving for a while, and decided there was no time like the present. I signed up with a local company, Skydive Orange, paid my deposit and counted down the days excitedly without a drop of anxiety.

On the day of my jump, I arrived at Skydive Orange early to sign waivers and to watch a safety video. Inside the hangar, our names were written on a whiteboard indicating the assigned tandem partner with whom we’d jump. For the life of me I can’t remember my partner’s name, but what I do remember is that we were supposed to have a short on-the-ground lesson before we even boarded the plane. I watched the other tandem jumpers practicing proper jump positioning with their partners, but my guy was no where to be found and my jump time was quickly approaching. I wasn’t even harnessed up yet!

About two minutes before my scheduled flight time, my tandem partner came running into the hangar yelling my name. I answered, “here!” and before I knew what was happening he quickly whisked me away to the field where the tiny airplane was waiting. He had just landed from the previous batch of jumps, so he had to hurry to make this next flight with me. He literally harnessed me up as we were walking to the plane, and that is the moment when I started to get just a little nervous. What if in his rush to make the flight time, he didn’t harness me correctly? He finished making adjustments while we were on the plane, tightening a strap here, checking a carabiner there, and gave me a quick overview of how to read the altimeter which he had just fastened to my wrist.

The ascent in the tiny plane seemed both short and long if that’s possible, but all too soon the huge side cargo door was opened and pairs of divers began to scoot towards the opening. Once I was at the door, the terror hit. What in the world was I doing?! And why didn’t I have the proper fear mechanisms in place to warn me in advance that this was a very bad idea?! It was too late though – my partner gave me the 3-2-1 count (or maybe it was 1-2-3?) and before I knew it, there was nothing but air between the ground and me. And I loved it. What a rush! The incredibly windy freefall lasted 60 seconds, but again, that minute felt altogether too short and also way too long. I don’t want to completely spoil the surprise, but that stomach-in-your-throat feeling you get from a deliciously big drop on a rollercoaster? Not the case here – you are so high up that the sensation is entirely different.

After the chute opened (thank you, dear God!) by way of my partner grabbing my hand to pull the ripcord together, we spent about 6-7 minutes in flight, gently sailing towards the bullseye target. I steered for part of the time, but mostly I just took in my surroundings – I can’t recommend Virginia in the fall enough as the absolute perfect backdrop for a skydiving experience.

Here I am getting ready to board the Cessna Otter with my tandem partner, and the image on the right is post-jump, all smiles! (And hey, check out my super light-wash jeans.) 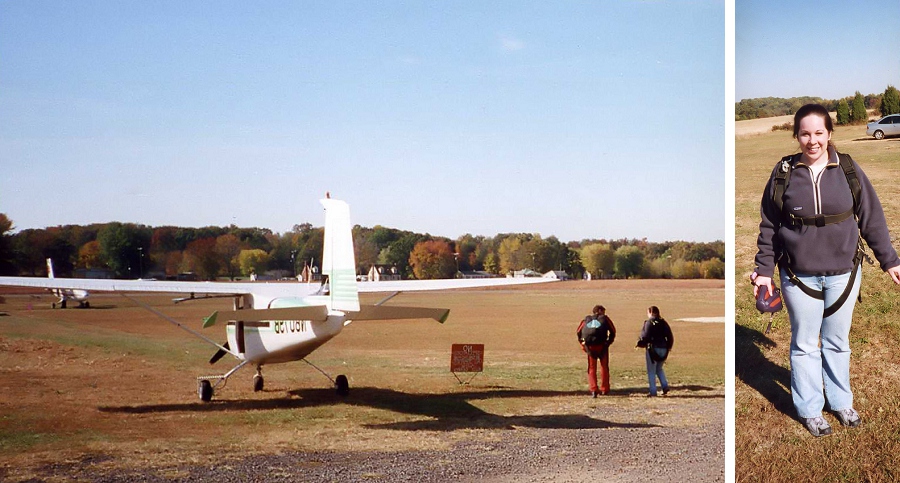 The quality isn’t that great since the original is on a VHS tape (there was no digital video option way back in October 2001), and I’ve transferred that to a digital file and then compressed it for web, but you’ll still get the idea. There’s one jumper before me at the very beginning, and then I’m right after that. I can’t tell you what I was saying right as I’m standing in the doorframe because I don’t remember exactly, but I’m pretty sure I’m glad you can’t actually hear the words. 🙂 I wasn’t really scared up until that exact moment, and then for about 10 seconds I was terrified. Once I jumped, I was fine, and once the parachute opened, I was even better!