Photo Friday – Through the Lenses

It’s Friday! And trust me, I’m totally thrilled about that fact alone, but I’m also missing Grand Cayman. I completely surprised myself by falling in love with the island! Maybe it was just that the trip was the perfect combination of idyllic weather, fun activities, and plenty of time to relax and unwind. I also avoided getting badly sunburned and I didn’t suffer many bug bites (only two!), which was icing on the delicious vacation cake. It was probably the first beach/island trip where at the end of the week, I wasn’t actually ready to go home yet. Usually after a week on a Caribbean island my skin hurts from being burned (no matter how vigilant I am with the sunscreen), I’m covered in itchy red mosquito bites, and on top of that I’m tired of feeling slimy from wearing various chemicals and lotions attempting to avoid burns and bites. Not to mention after a week of sun, wind, and sea, my hair is also ready to go home.

Perhaps I’m just getting better at island living. This time I wore rash guards almost all the time at the beach, and our villa featured a beautiful screened-in patio above the pool where I could lounge in the shade and hide from the mosquitoes. And I conditioned my hair even more frequently on this trip, such that my hairstylist noticed and said my hair held up well. But I also think Grand Cayman had some special properties of its own with the power to command my thoughts several weeks later. I keep thinking about giant, friendly stingrays who magically posed no threat to tourists, crystal clear waters that give you the illusion you’re in a giant salt water aquarium, and easy island-living that invoked instant relaxation upon arrival. Even Chris remembers Grand Cayman extra fondly, despite spending two days ill from food poisoning.

So while I’m reminiscing, I hope you’ll forgive me for posting another Cayman-related photo – it’s Chris relaxing on a pool float, as seen through my favorite sunglasses. I’d go back to the island (and stay in the same villa) again in a heartbeat. It was one of our favorites! 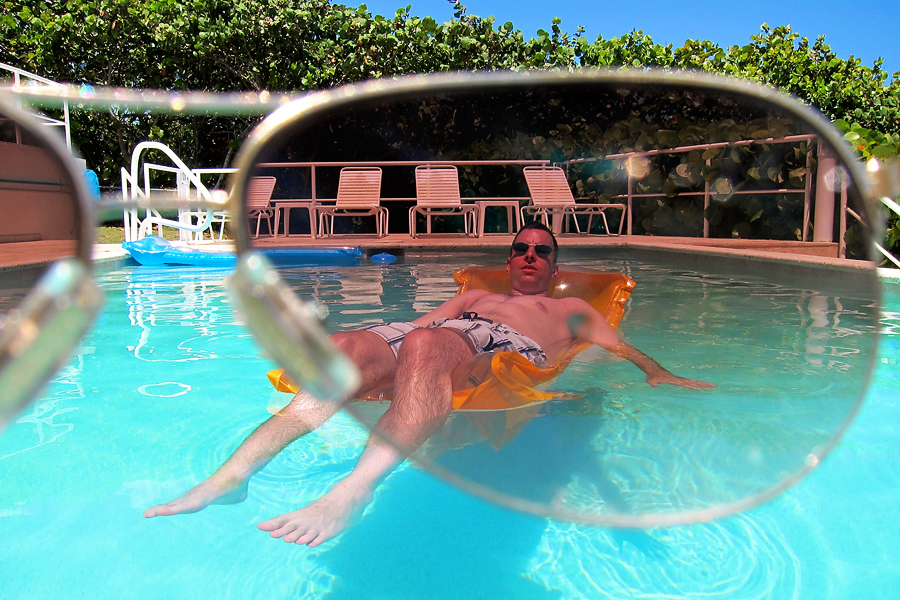