A few of my photog friends are doing something called Project 365 where they take a photo a day for an entire year. I think most of them started on January 1 of this year. I totally wanted to participate, but I missed the start date. Starting a business on top of my day job has been keeping me pretty busy since the first of the year (excuses excuses!), but I want to do something similar. So I’m going to participate in my own mini exercise: each month I’m going to pick a new list of 10 things to photograph, and I’ll (uncreatively) call it Project 10.

This month’s list is “10 Objects Found at Home.” And that’s strictly objects found in my own home already, and in their natural location. So here’s Project 10/List 1 – Image 1: 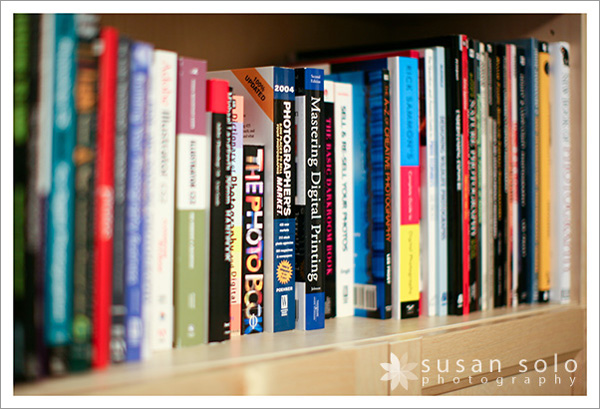 I guess that’s not really one object, but it’s my collection of photography books and they’re on one shelf, so I think that counts. I sort of thought 10 Objects Found at Home would be an easy topic to start with, but I just realized that I shoot around the house so much that I’m pretty worn out on subjects in my own house. I’ll have to really look hard to find some interesting things to photograph!

Feel free to play along – I have a few ideas for upcoming lists, but also let me know if you’d like to suggest a list.

« Flourish: Lights Out SessionI Wanna Be a Rockstar (And a Geocacher) »