Driving in Circles: The Ring Road and the Golden Circle

On our second day in Iceland, Chris and I picked up a rental car and kicked off our Ring Road adventure. Highway 1 goes all the way around the island in a complete circle, also known as the Ring Road, and it passes through or near many of the major must-see items in Iceland. The total length is over 800 miles, but Chris and I added several mini trips off the main route to see some off-the-beaten-path areas and we ended up adding about 400 miles to that total. Throughout my Iceland blog post series, I’ll point out which places are detours off the Ring Road. I’ll also be writing a Ring Road tips and logistics post to share some of the things we learned (the hard way). 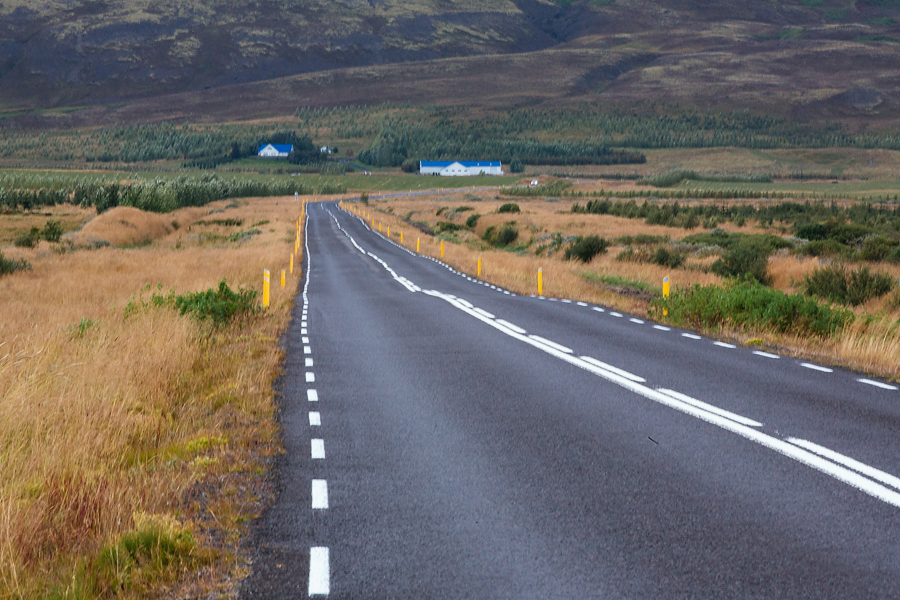 We drove the Ring Road in a counter-clockwise direction, so Day One started off with the classic Golden Circle route just outside of Reykjavik. Not to be confused with the Ring Road, the Golden Circle consists of three major sites – Þingvellir National Park, Haukadalur valley (home to Geysir and Strokkur), and Gullfoss waterfall. The Golden Circle is one of the most popular attractions in Iceland and it’s easily accessed right from Reykjavik as a day trip. There are tons of tour companies who take groups out on Golden Circle tours, but I highly recommend the self-drive option. It’s very easy to drive in Iceland, and that way you can see the places at your own pace.

Our first day on the road started off gray and quite cold, and then it quickly turned into a steady drizzle of rain. That weather would normally call for staying curled up under a warm blanket with hot tea and a good book or movie, but our adventure awaited so off we went! I think we might have missed out on some scenery because of the low hanging clouds (we kept wondering if there were mountains out there), but we were able to see most of what we set out to experience starting with parts of Þingvellir.

One of my favorite sights was this field of rocks stacked in neat little piles in Þingvellir. Yep, piles of rocks. Sounds exciting, right? On the drive from Keflavik airport to Reykjavik, I noticed random stacks of rocks every once in a while in the lava fields along the highway, but I wasn’t exactly sure what I was seeing. When we arrived to this field in Þingvellir, the signage didn’t explain the stacked rocks, so (this is embarrassing to admit) I assumed it was a natural occurrence. I was fascinated! How did these piles of rocks stack themselves all over Iceland?! Spoiler alert: it’s not a natural phenomenon; the piles are man-made. The story is really cool though – over a thousand years ago, there was a farm destroyed by the first recorded eruption of the volcano Katla. Icelanders memorialized the tragedy by leaving a stone for good luck when they pass the farm. (We saw the original site later in our trip.) The tradition has continued, and I think I like that even better than if it were a natural occurrence. 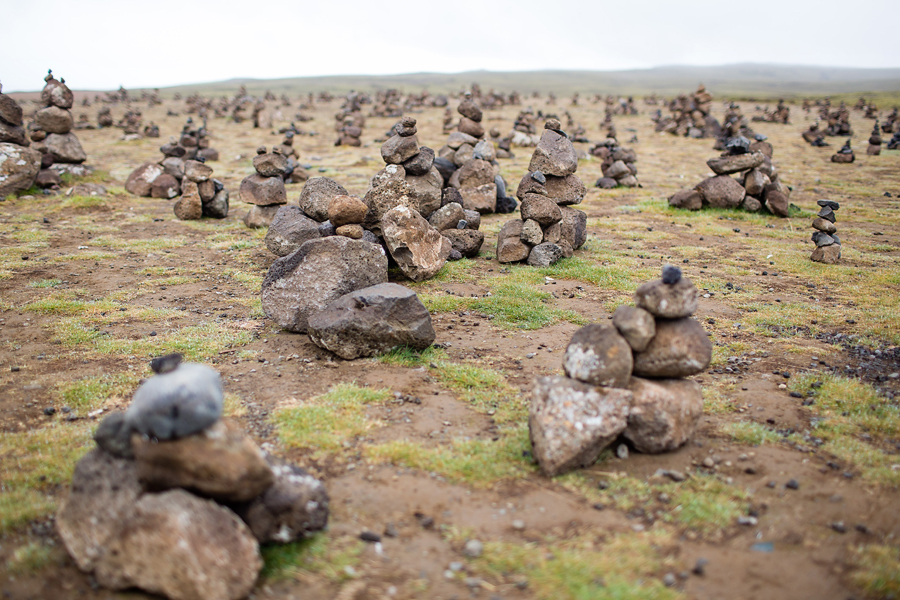 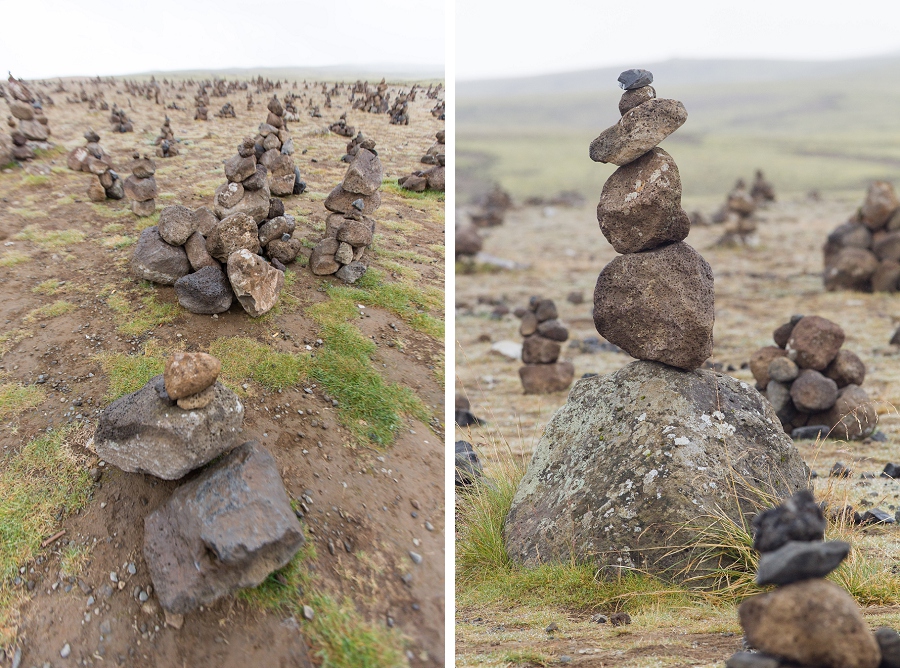 We didn’t spend much time exploring Þingvellir because I had booked a snowmobiling trip scheduled to meet near the Gullfoss waterfall at Noon. Unfortunately, when we arrived at the meeting spot, the guide determined that it was too windy on the glacier to even stand up, so the excursion was canceled. We weren’t that disappointed because the weather would have made the ride pretty unbearable. So after lunch at the Gullfoss Cafe, we went to see Gullfoss, one of the most famous spots in Iceland.

I’m sad to say that we didn’t take that many photos of Gullfoss because it was just too cold, rainy, and windy even with wearing lots of layers and a waterproof jacket. We definitely weren’t treated to the clear blue skies and rainbow often seen in photos of this double-drop waterfall, but it was beautiful and I’m glad we got to see it despite the weather. (Don’t mistake the blue in the sky for lovely weather – it’s really just dark, stormy clouds.) 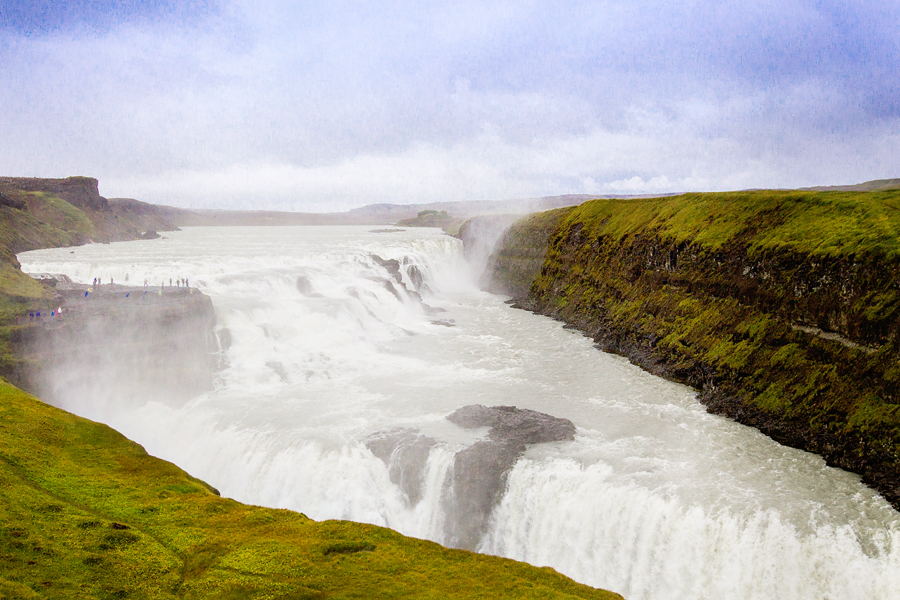 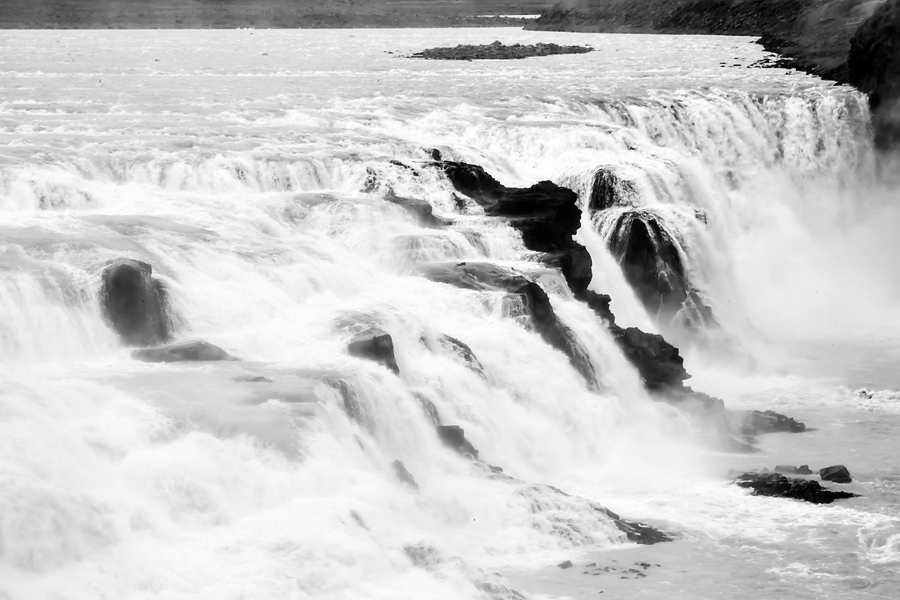 Our third and favorite stop in the Golden Circle was the geothermal activity of Haukadalur where we found hot springs, mud pots, and geysers. About five kilometers away, we could see the geyser erupting high into the air and I shrieked! (It’s a good thing Chris is used to me being over-excited about everything, or else I would have startled him into a car wreck.) As we entered the area, we saw steam rising from the ground and streams of steamy water running alongside the road. Before we saw the signs warning us not to, we did test the water temperature with our fingers. I can confirm that it is scalding hot! Ouch! 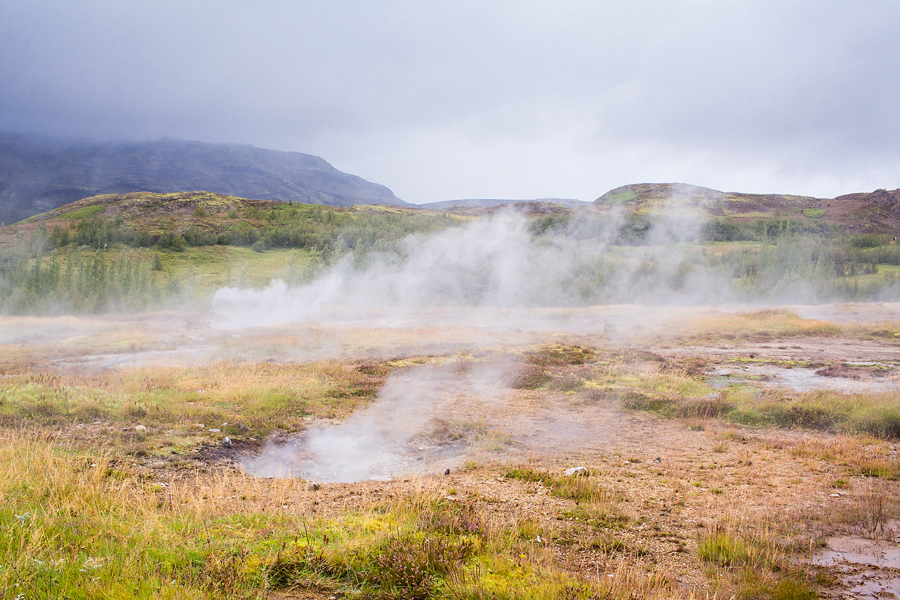 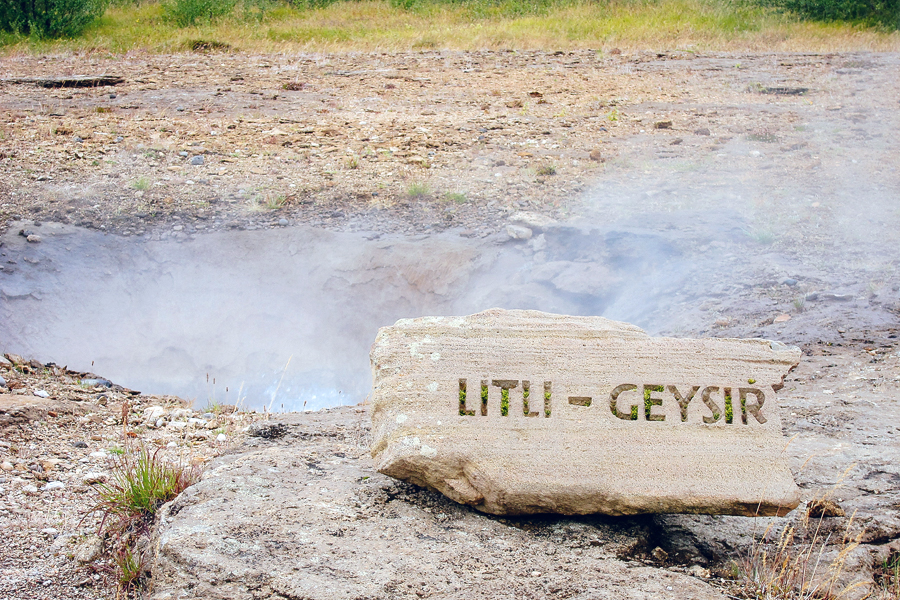 All of the sites on the Golden Circle route were pretty well mobbed with tourists, but photographing the geysers without people in the background proved to be an impossible task, so I just embraced it to show the popularity of the area. Capturing the eruption of Strokkur against a gray sky was also tricky, so I’m not sure you’ll get the full magnificence of the geyser. Strokkur erupts reliably about every 5-10 minutes at an impressive 15-20 meters high. You’ll just have to go see it in person! Chris took the gorgeous photo of the blue bubble just before eruption. 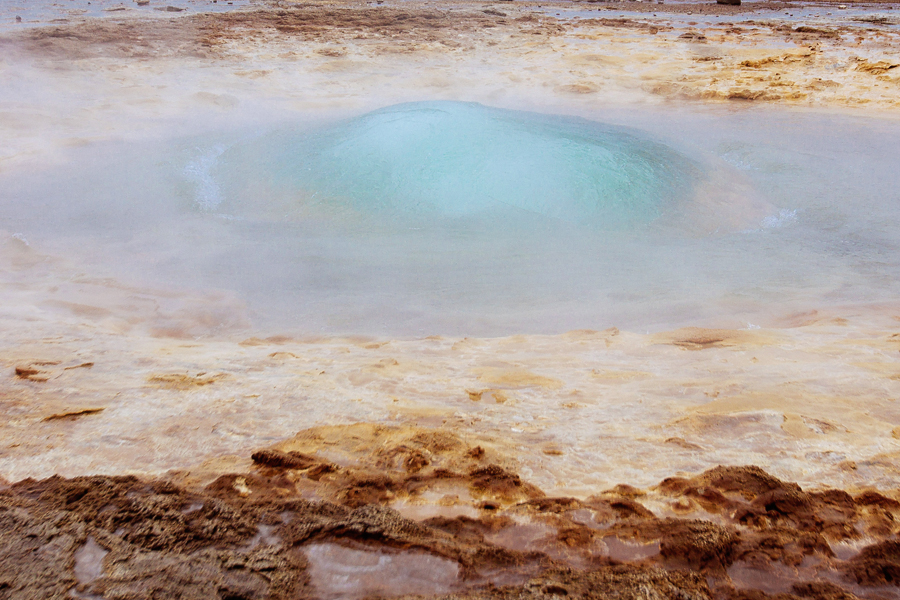 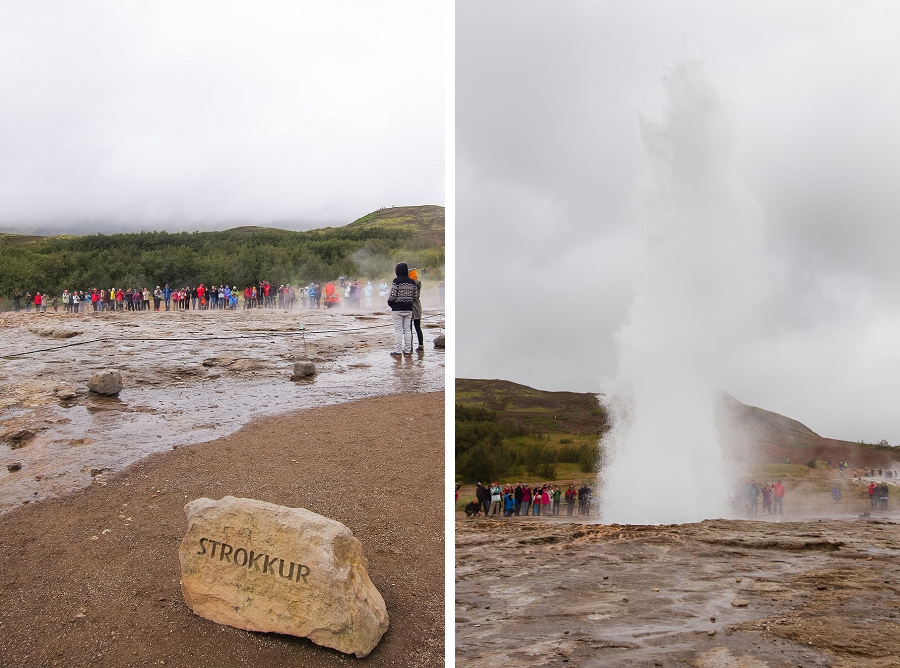 And in the spirit of full disclosure, I’ll mention that this next photo was not altered in Photoshop – the water in this hot spring really was that blue! In addition to squealing with delight over piles of rocks, steamy hot streams, geysers, waterfalls, not-of-this-planet landscapes, I also squealed over how blue this water was. I mean, why is it so blue?! 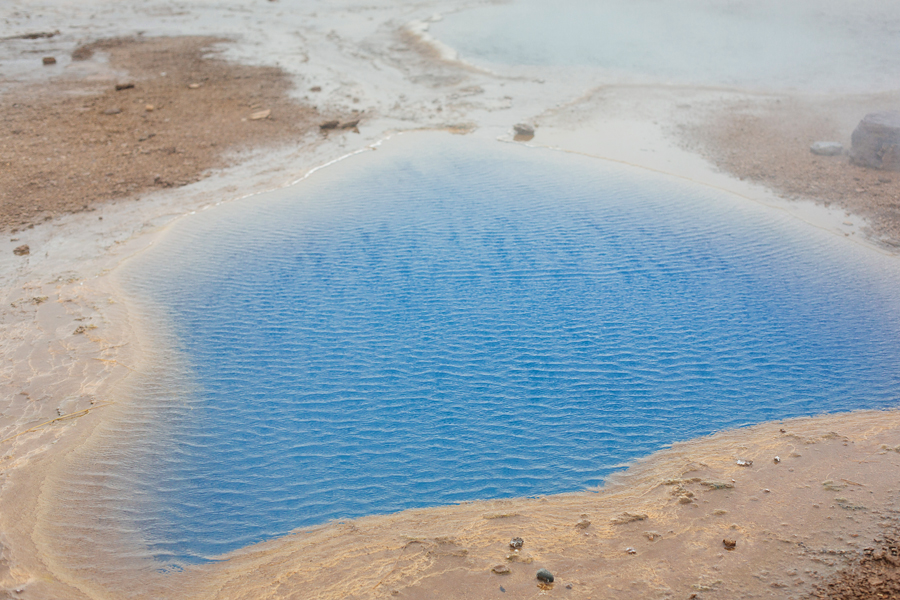 After seeing the main parts of the Golden Circle, there are a few options for driving back to Reykjavik if you are on a day trip. Chris and I, however, were headed towards South Iceland so we continued on Rt. 1 for an overnight stay in Hella. Up next, our busy Day Two exploring sights of the south and some of our favorites from the whole trip including Seljalandsfoss waterfall, Reynisfjara beach, Fjaðrárgljúfur canyon, and Jökulsárlón lagoon. 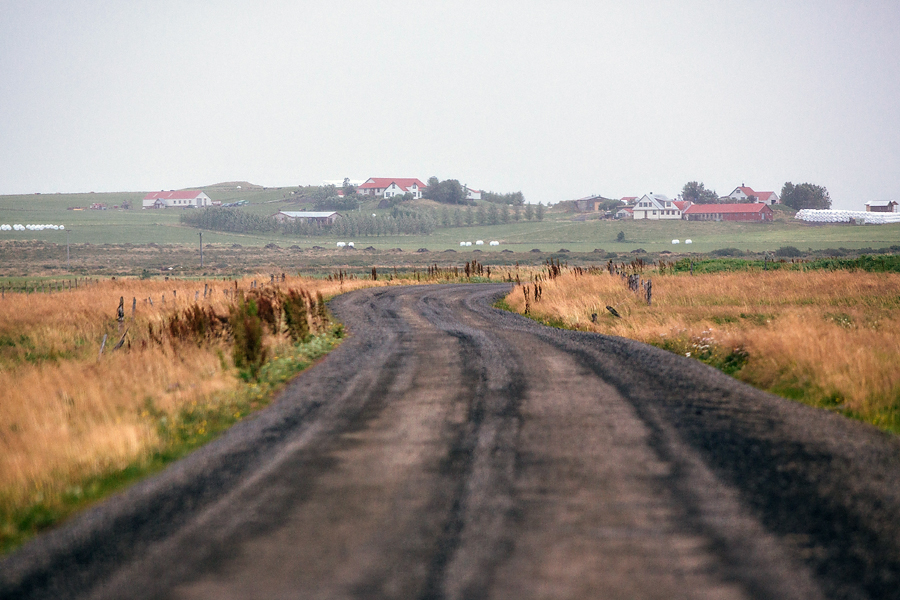 « A Day in ReykjavikSouthern Iceland Sampler – Part I »